With Andrea Pirlo out through injury, the first Serie A matches of the season against Chievo and Udinese showed different ways for Juventus to build up from defense. Leonardo Bonucci's distribution became simpler with Kwadwo Asamoah and Martín Cáceres taking on more responsibility.

The first match of the season always offers something new, even if it's just recognizing that the old hairline has crept a little further back. For Juventus, with a new coach and several important players out injured, the season opener offered more new sights than most.

Since Antonio Conte adopted the 3-5-2 formation midway through the 2011-12 campaign and full time in the 2012-13 season, the play has always been built in the same way — a short pass from goalkeeper Gigi Buffon to one of the defenders, followed by an extended passing sequence as the diamond formed by the three center backs and Andrea Pirlo worked the ball down the field. Longer passes were provided by the gifted feet of Pirlo and the oft-maligned Leonardo Bonucci, while the forward thrust came from one of Giorgio Chiellini, on the left of the back three, or Andrea Barzagli, on the right. With Pirlo, Chiellini, and Barzagli all missing through injury, and of course a new man on the bench, fresh wrinkles were always likely.

This article focuses on changes in passing forward from the back, for an excellent analysis of the attacking play further forward I can recommend this piece (in Italian) by the excellent Fabio Barcellona.

As it turned out, the changes were more dramatic than I expected. In the first match of the year, the biggest change was at the very back with Buffon playing more long balls, especially towards the right flank where Stephan Lichtsteiner won all three of his aerial duels. While last season's opener against Sampdoria saw Buffon play only 4 long balls, this time around he launched 21. Bonucci's stats show almost exactly the inverse, with the libero playing 17 long balls in last season's first match and only 4 against Chievo.

With the right side of the buildup designed around balls to Lichtsteiner and the Arturo Vidal action zone, the left side was where most of the passing buildup occurred as Paul Pogba and especially Kwadwo Asamoah took on much more of the creative responsibility. When Pirlo is out Pogba is the most technically-gifted midfielder in the Juventus team, and with added maturity he will only become more central to the way the team plays. Asamoah, though a wingback throughout his time in Turin, has played most of his life in central midfield and indeed since the Chievo game has played there twice for Ghana, as well as in the Champions League tie against Malmö. Under Conte he became a proficient wide man with his dribbling ability, left-footedness and boundless energy coming in very useful but now it seems Allegri wants more buildup presence and passing contribution from the Ghanaian. Both left-sided players made far more passes, especially in central areas, than last year against Sampdoria. 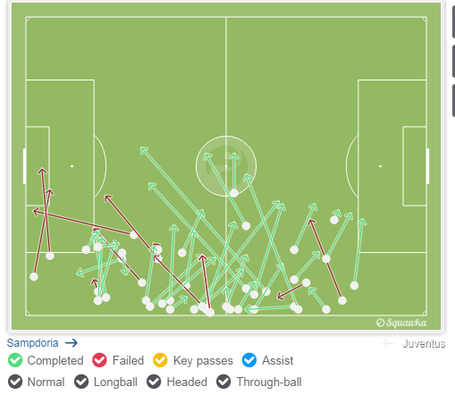 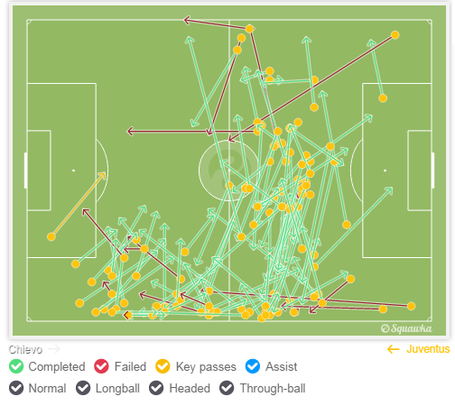 Asamoah passes against Sampdoria, in last year's season-opener, and this year against Chievo 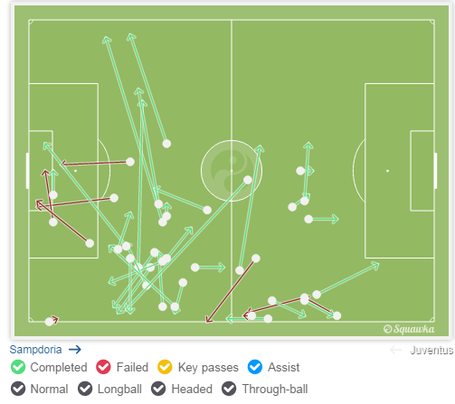 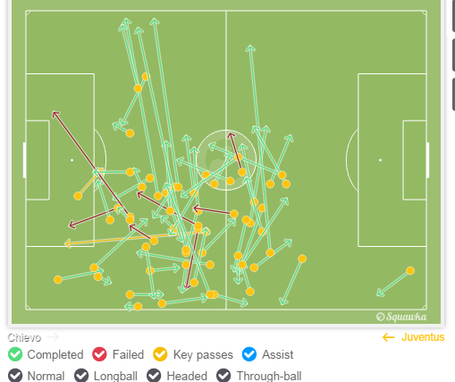 Pogba passes against Sampdoria and Chievo

In the second game of the Serie A season, Juventus welcomed Udinese to Turin without Asamoah or Vidal in the starting lineupo. The buildup play changed to reflect these absences, but the performance was just as dominant as the week before with the team recording 7 shots on target to just 1 from Udinese. In terms of buildup Buffon's role changed, with the goalkeeper playing just 7 long balls as opposed to 21 the week before. Bonucci still had a primarily defensive role, playing just 3 long passes, but much of the slack was picked up by Angelo Ogbonna and Martín Cáceres. Ogbonna played 12 long balls, compared to just 5 the week before, while Cáceres frequently carried the ball well past the center line and initiated midfield passing sequences. Patrice Evra, on the left wing in his Juventus debut, put in a much more traditional wingback performance than Asamoah had in Allegri's first match, pretty much sticking to the touchline. 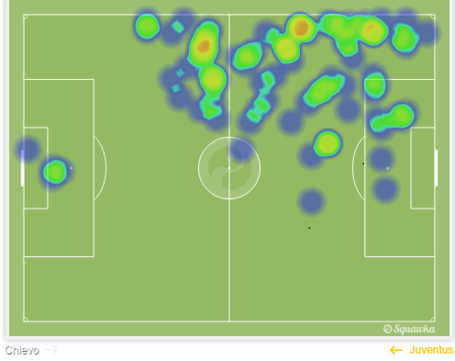 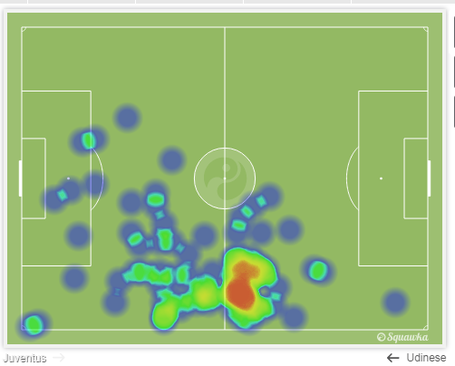 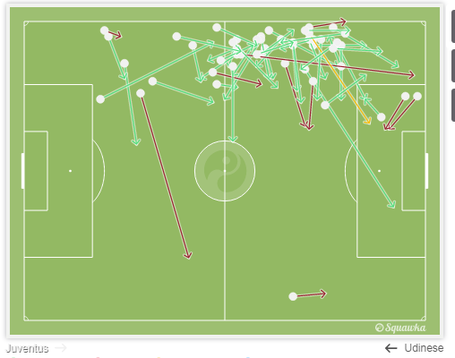 As the season wears on, with Pirlo and the others returning to full fitness, these changes will likely become less pronounced, and there will certainly be game-to-game changes to focus on opponent's weak points and protect Juventus' own. With that said, Massimiliano Allegri's first game against Chievo certainly presented a different style of build-up play to that which was so familiar under Antonio Conte. Although the results (and formation) remained the same, Allegri has already begun leaving his mark on the Old Lady.

*statistics from Opta via whoscored.com and squawka.com