Share All sharing options for: Tuttosport has thrown out some figures regarding Paul Pogba's potential contract extension

As we've come to learn with Arturo Vidal over these last few months, it doesn't really matter what a contract situation is like, transfer rumors will surround a player like hundreds of bees buzzing about. They will be there, forever annoying the living hell out of you — and probably scaring you at the same time.

Another significant member of Juventus' midfield, Paul Pogba, has seen plenty of transfer stories involving his own name the past 12 months. And there have also been a handful of stories about Pogba and the contract — with the significant pay raise that will accompanying it — he could get in the not-so-distant future. Beppe Marotta has repeatedly said that after Vidal got his new contract, Pogba would be one the next players to get one.

Are those contract talks happening with a potential agreement on the horizon? The always-reliable (lol) Tuttosport seems to think so. 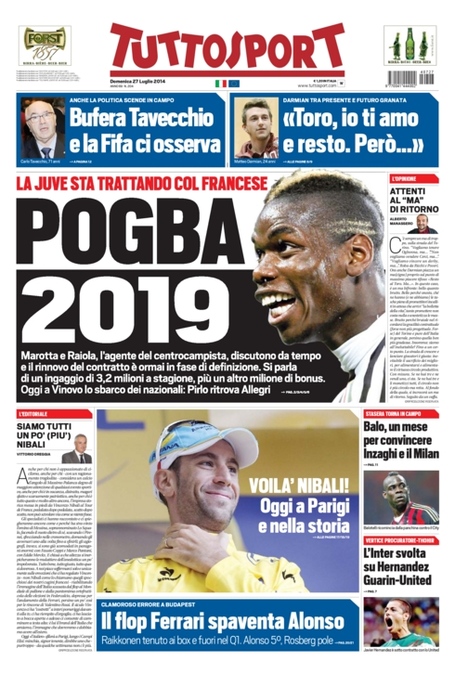 The short version of it:

This isn't the first time talk of a Pogba contract extension has been brought up. But unlike those times before, we're actually getting some kind of figures — no matter if they're close to the truth or far from it — to go along with the it. This could be the baseline from where the Juventus management and Pogba's reps (most notably Secret Agent Mino) begin talks, it could be some close to the difference as to where they'll try and agree on something.

Right now, we're not so sure.

But even with Pogba taking a vacation for a day or two in London making the British press lose their minds and go completely bonkers, it's not exactly like the sheer number of continuous transfer rumors are anywhere close to that of Vidal this summer. Sure, there was the initial freakout when Antonio Conte stepped down nearly two weeks ago, but they've subsided quite a bit. And it's not like Pogba's reps have given any indication that their client wants to move to another club before the summer transfer window is closed.

That means, by all accounts, Pogba is still happy in Turin. And because he's happy, he will still have the desire to stay around in Turin for the somewhat immediate future. Maybe not for the rest of his career because it's so rare for players to do that these days, but for a good amount of time as he becomes even that much more of an important part of the squad no matter who the manager is.