Juventus 2013-14 Season In Review: The Goalkeepers

Share All sharing options for: Juventus 2013-14 Season In Review: The Goalkeepers

I sit down after every season and think the same thing: "What the hell haven't I said about Gigi Buffon that I have already put down on the keyboard three or four times already?" It's the inner monologue of a Buffon-obsessed writer, you could say. But at the same time, when dealing with such a legendary figure, it's hard to think of new things to say when so much attention has been throw in his direction.

I throw this out there: A season ago, Juventus 24 goals in Serie A. This season? They allowed 23 goals.

Without looking it up online and going solely off of your own memory, would you have believed that Juventus' defense was statistically better this past season compared to a year ago? I wouldn't have thought so as all those memories of Juve allowing stupid goal after stupid goal the first three months of the season roll back into my mind. But a big reason as to why Juventus' defense allowed on fewer goal in Serie A this season was the play of one guy.

As much as it makes us rage and scream whenever one of Juve's defenders screw up, it's pretty nice knowing that there's the GOAT laying there in waiting to pick up his teammate. And Buffon was again damn good in a record-breaking season for Juventus. Not that should surprise us at all. It's Gigi Buffon we're talking about here.

I like stats, so I'm just going to throw this one out there.

A couple saves here and there isn't that big of a deal. But when you are forced to make a good number of saves one season compared to last, then something is up.

Buffon is never going to make as many saves as other goalkeepers in Serie A simply because of how good the players who are in front of him are. There's a reason why Juve have had the best defense in Italy for three seasons in a row, and a big reason for it is because of the likes of Giorgio Chiellini, Leonardo Bonucci, Andrea Barzagli, Martin Cáceres and Angelo Ogbonna.

But would you say that Juventus' defense was better this season — especially the first couple months of the year — compared to the previous two under Antonio Conte? I'm not so sure of that. And that's why Buffon had much more to do than in previous seasons.

More shots faced, more shots needing to be saved. It was the third straight year that Juve statistically had the best defense in all of Serie A, but they also had a decent amount of hiccups.

The consistent player in all of it was Buffon, who is heading to the World Cup on really, really good form. He stayed completely healthy for the second straight season, playing in 47 games in all competitions. Not exactly something you might expect out of a goalkeeper who is entering his late 30s, but this is San Gigi we're talking about here, so... 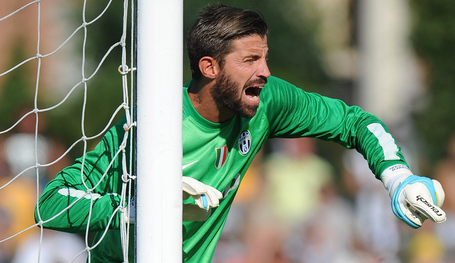 I like stats, so I'm just going to throw this one out there.

Even with the lack of playing time the past couple of years, Storari has continued to be one of the most reliable backup goalkeepers in European football. His contract is up this summer, but seeing as he seems perfectly happy to be Buffon's backup, there's no reason to think Storari will choose to play elsewhere next season.

And who doesn't like seeing Storari frustrate the hell out of Roma every time he plays against them? So much fun. Just don't ask him for a high five afterwards. We gotta work on that, Marco.

One appearance, no goals allowed, plenty of unibrow. They call this "The Rubinho Special" around Turin.

Could this be the last we've seen of the man who sports a unibrow so proud in a Juventus goalkeeper jersey? Who knows. Juve could either bring him back for another year as the No. 3 goalkeeper, sign another veteran keeper who knows that he's barely going to play because of who is in front of him, or give an opportunity to a younger player — Nicola Leali, maybe? Laurentiu Branescu, perhaps? — to learn under Buffon and Storari.