Much like the way they arrived in Turin, Carlos Tévez and Fernando Llorente began their 2013-14 season in completely different scenarios. Juve's new No. 10 came out full guns blazing, scoring the game-winner against Sampdoria on his official Serie A debut. Llorente, on the other hand, was essentially shaking off the rust of his lack of playing time the season before, having to wait his turn before Antonio Conte felt he was truly ready to play.

Many wondered, why, exactly, Conte wasn't going with Mirko Vucinic rather than Llorente alongside Tévez. The Italian press went on a full-court press, thinking of every possible scenario as to why Llorente wasn't playing. Remember those rumors two weeks into the season that Fernando was off to London to sign with Arsenal? Yeah, those were pretty hilarious.

Okay, cliche time: Good things come to those who wait.

Llorente admitted that it would take time to get up to speed considering everything he had been trough the previous season with Bilbao. And it was no fault of his, of course. There's only so much you can do when you're basically frozen out of a squad for an entire season. But that was Fernando's reality no matter how much work he put in during training.

So in a pre-season post, I asked this simple question: 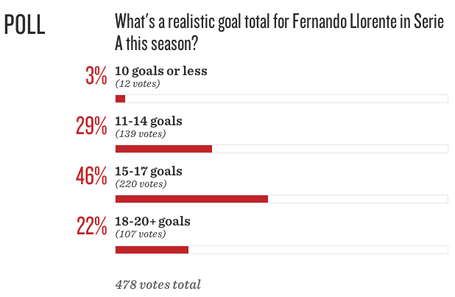 Scoring between 15 and 17 goals in his first season with Juventus wasn't exactly out of the question based on his career accomplishments in Spain. Llorente, pre-Bilbao exit, was one of the better prima puntas La Liga had to offer. And when you consider the squad he was joining, it's not like there was going to be a lack of scoring opportunities to take advantage of.

The end result in Llorente's first season in Turin? Glad you asked...

Sixteen goals on 63 shots on goal? I'd say that's a pretty good ratio. Llorente started 29 league games, played 2,502 minutes total in his 34 Serie A appearances. So basically, he scored a goal every other game — which is something that I'd take pretty much every day of the week. And then when you consider the season he was coming off of, one where he seemingly strapped to the Bilbao bench, it's even that much more impressive.

Even with the outside factors, Llorente's first season with Juventus has to be considered pretty good ... right? I remember sitting down to write the preseason Llorente post and basically having three possible outcomes of how things might go pop into my head.

1. Llorente will light Serie A on fire and score goals like they're basically going out of style.

2. Llorente will be good, but not great, scoring a decent amount goals - some of which being decisive.

3. Llorente will be completely meh, sprinkling in sporadic quality performances around a bunch of so-so outings.

I guess in that scenario listing there should have been a fourth option, something between No. 1 and No. 2. Llorente didn't light Serie A on fire and score goals like a mad man. But Llorente wasn't "good, but not great," either. Llorente was great at times — that's a definite way to describe Llorente in the middle part of the season as he scored goals in both Serie A and the Champions League. There were other times when Llorente was so-so and really didn't have huge impacts on games.

The final verdict was something that is undoubtedly really good. And compared to what Juve were getting from their lead strikers in previous season, I makes Llorente's season look that much better.

The biggest thing for Llorente going forward is that now he gets to have a "normal" summer — even if he ends up going to Brazil with the Spanish national team. There won't be the extra incentive to knock the rust. He will be in the same boat as everybody else whenever he starts preseason training.

"E' SOLO BELLO?" huh, Tuttosport? I think Fernando Llorente is having the last laugh. And he should be.