Not, not the movie, you nerds. But good knowledge on your part.

Juventus has traveled far and wide this season. From Italy to Spain and back again. From Italy to Denmark and back. Over to Turkey and back to Turin — twice! It's been quite a travel-filled European journey that has covered hundreds upon thousands of miles, from one end of the continent to the other.

And this week brings us a new destination.

It's off to the land that brought us the wonderfulness that is Paul Pogba for everybody who wears black and white jerseys. Maybe we should thank the wonderful country of France for Pogba? I dunno, just an idea I had. But the first leg of the Europa League quarterfinals takes Juventus to a country they have yet to step foot in this season. Maybe that's a good, maybe it's not. We do know one thing, though: They arrive as a team coming off a loss, yet they are still the odds-on favorites to win the whole damn thing in front of their hometown crowd next month.

The thing is this: The way Juventus has been playing for the better part of their stint in the Europa League, we don't know how they will react to the 2-0 drubbing at the hands of Napoli this past weekend. We know how we want them to come out and play against Lyon tomorrow night. But we don't know for sure how, exactly, they will react to one of their worst performances of the year.

That's the interesting thing in all of this, I guess. This game can be funny in a cruel kind of way. It's been weeks upon weeks, months upon months since Juventus were put in the situation they are currently in. Their last league loss was when Roma was taking Serie A by storm and racking up shutouts like they were going out of style. The last time they had to react to a league loss was when they were in a completely different European competition.

But if that last time is any kind of hint, then things will be more than okay. Or, if the last six weeks are any indication, then maybe things won't just instantly become better at the snap of Antonio Conte's magical managerial fingers. (That would be nice, though. Just being honest.)

Maybe a European tie will be just the cure like the last post-loss one was and Juventus roll into the Europa League semifinals and clinch the league title sooner rather than later. That sure would be nice, wouldn't it?

Like I said, Juventus can use the loss to Napoli the same way they used the Fiorentina defeat back in late October — a much-needed kick in the backside that can snap them out of their current funk. There is no guarantee, of course, but when you get worked over like Juve did on Sunday night, sometimes a reality check is the thing you need.

If you have watched Juventus lately, you pretty much know things aren't going so hot right now. There are wins and the lead atop Serie A is still pretty comfortable, but the team's actual form has been pretty darn ugly. Winning ugly is one thing, but Napoli pretty reminded us of what we already knew — Juventus isn't playing well at all right now.

Side note: No Arturo Vidal thanks to his yellow card in the second leg against Fioretnina. Claudio Marchisio, welcome back to the starting lineup. Now go out and do something awesome against Lyon.

1. Carlos Tévez's return to the lineup.

Tévez is rested and probably tired of hearing about how he hasn't scored any goals in Europe for longer period of time than this blog has been in existence. Well, I know I'm tired of it, so I'll just speak for Carlitos in this sense. And while the team as a whole has taken a total step back in terms of form, don't blame it on Juve's No. 10. He continues to be one of the squad's most consistent players — even in Europe when he's not scoring goals. Now I'm pretty sure it's time to go out and score a goal in Europe so everybody shuts the heck up about no European goals, Carlitos. Just a suggestion.

2. Who else starts up front?

Fernando Llorente isn't on top form like he was a few months ago. Dani Osvaldo has cooled off since he first arrived in Turin. Sebastian Giovinco is sometimes healthy, sometimes not even included in the match day squad. Mirko Vucinic is probably thinking about his next mustache after finally taking the field over the weekend. The striker options to play alongside Tévez are...yeah, hard to say at this point. For as much as I thought Conte would stick to his guns and continue to play Osvaldo in Europa League matches, he had Llorente play from the start in the second leg against Fiorentina. But as we've seen, Llorente's big contributions are becoming less and less these past few weeks. I guess what I'm trying to say is that your guess as to who Tévez's strike partner tomorrow night will be as good as mine.

3. Paul Pogba on his home soil.

Outside of national team duty, this is the 21-year-old Frenchman's first trip to his homeland since he became a Juventus player. You would think that because of said event, he would have a little extra motivation to go vintage Pogba on Lyon and do some things. You know, match-changing things where Pogba absolutely takes over. We all know he is capable of such awesomeness, but much like the team's overall form in recent weeks, Pogba being Pogba has been pretty hit-and-miss. I might be going out on a limb here, but having one of those big-time Pogba games when there's likely to be a few extra eyes on him would be pretty nice to see. (Okay, that's not exactly going out on a limb.)

4. Getting the vital away goal or two.

The last two rounds, the shoe was on the other foot. Juventus were home and therefore preventing some kind of away goal shenanigans. But now that the script is flipped, and Juve get to play the first leg away from home rather than in front of the home crowd at Juventus Stadium. It's probably the way a lot of us want it considering if Juve return home with an away goal, it will be just that much tougher for Lyon to overcome things. Even with that, they're going to have to overcome a few things — or injuries — in the first leg. 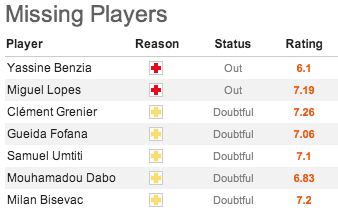 That's a whole lot of Lyon players out injured or more than likely out injured. If you ever wanted a chance to snatch an away goal or two when your opponent is less-than 100 percent, this would be that chance. Go right ahead, gents. I'm hopefully we won't have to remind you twice.