Tuttosport says Sebastian Giovinco will play in Serie A, Carlos Tévez in the Europa League

Share All sharing options for: Tuttosport says Sebastian Giovinco will play in Serie A, Carlos Tévez in the Europa League

The news following Juventus' 2-0 win over Udinese on Monday has been, well, relatively slow when it comes to actual on-the-field matters. It's pretty easy to understand why. There's no Scudetto race to hype up with Juve being ahead of Roma by a comfortable eight-point margin and Juve are about to battle with a couple of relegation battlers rather than title contenders.

There's been plenty of interviews, though, if that's your thing. Gigi Buffon talked about Paul Pogba and how he trusts the Juve management when it comes to the French midfielder's future at the club. Andrea Pirlo wrote in his English-version book about how Rino Gattuso tried to kill people with forks. Beppe Marotta talked about Antonio Conte and a contract renewal for the Juve manager.

You know, some stuff we've heard for months, some stuff that is relatively new and interesting.

Well, potentially this weekend if their report has any kind of juice behind it. 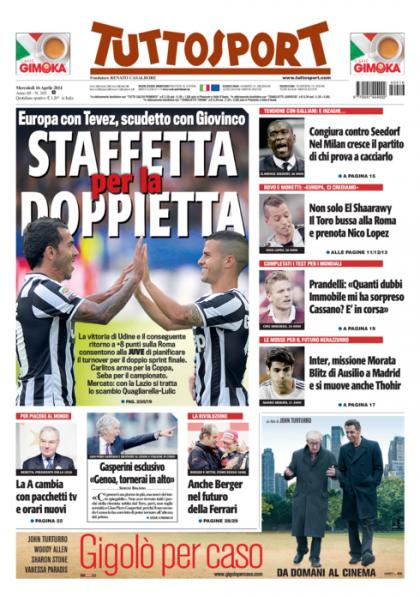 Simon (aka caption) Says: Relay for the Scudetto, Europa with Tevez, Serie A with Giovinco

It's something coming from Tuttosport, you know, so we probably have to take it with a grain of salt until it actually becomes a reality. But let's say all of this is what Antonio Conte is planning on doing for the final month of the season. Instead of spitting out typical transfer blabber on a daily basis, they actually went with something that makes a decent amount of success.

The gist of it, if you didn't figure out the caption by now, is that Sebastian Giovinco will be the one playing in Serie A matches and Carlos Tévez will put his attention towards Juve's upcoming Europa League games against Benfica — and possibly beyond if Juventus get that far.

The two biggest things of having a Tévez-Giovinco alternation?

Just consider this: Juventus have an eight-point lead over Roma and two big-time European games on the horizon. Would you rather have Tévez get extra rest against Bologna and be 100 percent and ready to break that favorite discussion point of everybody outside of Juventus circles a week from today? I think I know which one I'd go after.

But it's not like if you open Door No. 1 you're going to get a magical prize. Well, maybe Juventus playing in the Europa League final next month. In that case, I'd say Door No. 1 is a pretty good choice.

I understand that Conte wants to win everything left on the schedule because that's what Conte does. But a healthy Tévez is so much better than any other striker in Serie A these days.