Juventus vs. Parma Preview: Round 30 — Midweek football with a side of prosciutto

Share All sharing options for: Juventus vs. Parma Preview: Round 30 — Midweek football with a side of prosciutto

We've seen with our own two eyes the current unbeaten that Juventus is on. It was extended to 21 games over the weekend against Catania, the latest in so-so performances yet three-point takeaways. There is, however, another team in Italy putting together a pretty solid unbeaten run at the moment.

Well, it's Roberto Donadoni's Parma, who currently sit in fifth place with nine games to go in the 2013-14 campaign.

And who is Juventus playing tomorrow night in front of their Turin faithful?

Yeah, that same Parma team who hasn't lost a game since Juventus claimed a 1-0 win at the Tardini the first weekend of November. Since then, Parma hasn't been beaten, a span of 17 games that includes nine wins and eight draws. They've gone from hovering around the other mid-table squads to now in contention for a spot in the Europa League.

It's an impressive run no matter who. Come Wednesday night, though, it'll be Parma's biggest test in months.

The team Juventus has opened up the home schedule against the past two seasons is finally making its trip to Juventus Stadium. Both games, which ended in Juventus victories, were the start of something that ended in a title celebration months and months later. This time, Parma's visit to Juventus Stadium is at the end of March and one of the final games to go before Juventus officially clinches their third straight league title.

It's pretty easy to figure out: There's nine games left. Even fewer needed to clinch the title. Hey, it's the final countdown for a reason, folks.

The injuries are still here, taking up a bunch of space and ruining Antonio Conte's plans — even though Conte will be spending the match in a private box thanks to his sending off in the first half against Catania.

#Conte: It’s an unlucky period injury wise and I’m unable to rotate. My lads are showing themselves to be great players and great men.

New week, basically all of the same names present on the injury report. The only 'good news' coming out of the press the last couple of days is that Claudio Machisio has returned to training this week. The other injured players, however, seem to still be on the sidelines with their respective injuries. That means no Andrea Barzagli, no Angelo Ogbonna, no Federico Peluso.

1. Antonio Cassano vs. the Juventus defense.

There's a pretty good reason as to why Cassano is being tipped for a possible return to the Italian national team — he's absolutely on fire right now. This isn't a classic case of #FatCassano or a year where he's totally uninterested in playing any kind of football whatsoever. This has been a year — and especially so in the second half of the season — where it's been the Cassano that has carried Parma at times and really gotten back on top form. He's scoring goals, he's setting up goals, he's one of the more in-form players in Serie A right now. There's a few reasons why Cesare Prandelli is showing up to Parma matches these days. And one of the top ones is to see what Cassano is all about right now.

2. Fernando Llorente vs. the Parma defense.

Parma's highest-rated player on WhoScored? It has to be Antonio Cassano, right? Nah. It's Alessandro Lucarelli, who just so happens to also be the top-rated player in all of Serie A this season. Parma's other starting center back, a certain Gabriel Paletta, who just received his first cap for Italy, is one of their other highest ranked players, according to WhoScored. One would think that's who Llorente will be matched up against a lot during his time on the field Wednesday night. And while it hasn't been a huge amount of time between goals for Llorente, he hasn't found the back of the net since Juve's 2-0 win over Milan on March 2. With the way the Juventus offense has struggled to put up multi-goal games lately, it sure would be nice to see El Rey Leon find his scoring touch once again.

3. Will Claudio Marchisio make his return to the starting lineup?

The Gazzetta certainly thought so in the hours following Juve's win over Catania on Sunday. 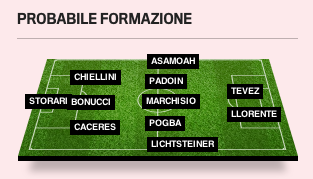 Then, 24 hours later, The Gazzetta trotted out this Juventus starting lineup on Monday. 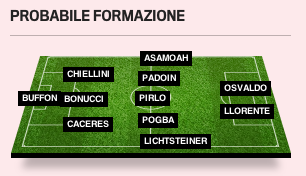 Besides the pretty much understandable and anticipated return of Gigi Buffon between the sticks for tomorrow's match against Parma, there's also a change in the two predicted starting lineups — one has Marchisio, the other has Andrea Pirlo in the center of the midfield. This is rather important seeing as Pirlo has been racking up the minutes due in part to Marchisio being out injured the past couple of weekends. Marchisio being back won't just mean Pirlo gets rest, but other midfielders as well. And the way he was playing before he got hurt, having Claudio around isn't all that much of a bad thing at all.

4. Will Arturo Vidal get some rest?

Another direct correlation of Marchisio — potentially — being back in the squad tomorrow night. Much like the overall team performances, Vidal hasn't been so hot lately. Understandably, some of the reason why he hasn't gotten much time off lately is because Conte hasn't had any options to really rotate his squad. And you'd like to think that it has played at least a little bit into his recent dip in form. That's only natural. He's not going to be outstanding every game. Even the greatest of players have an off day every now and then. But think about this — Paul Pogba is back, Claudio Marchisio might be back, and the chance to rest Vidal this round is a possibility for the first time in weeks.

In the grand scheme of things, this is the schedule we hoped Juventus had at the beginning of the season — games every three or four days, win after win after win. The only thing wrong with it is that there's no Champions League football. That's just a pretty noticeable difference, I guess. But either way, the games are coming in quick and consistent fashion. Juve are in the middle of a month-long span where there's eight games on the schedule. That's not exactly easy to deal with when you've got a good number of options at your disposal. Conte's situation is that he's had very few chances to really rest players who need a break because of all the injuries up and down the roster.