Patience is paying off for Fernando Llorente and Juventus

Share All sharing options for: Patience is paying off for Fernando Llorente and Juventus

The moment Fernando Llorente signed for Juventus on a free transfer last January, questions started racing into everybody's head. How would he adjust to Serie A? Would he end up like some of the other Spanish players who have struggled in Italy? How would he do after not playing for such a long period of time at Athletic Bilbao?

All of them understandable, regardless of the fact that Juve wasn't paying any kind of transfer fee whatsoever. 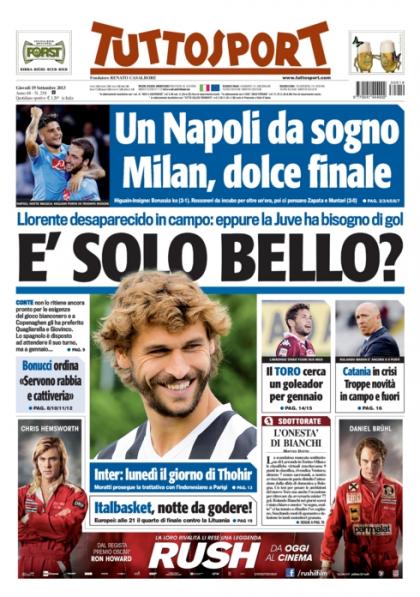 That front page was published in the middle of September. Up until that point, Llorente had played all of about a minute in Juventus' season-opening win against Sampdoria. That's it. Nothing more than that. Anything less, Llorente would have been completely shutout with a big goose egg to represnt how much playing time he'd gotten for the first month of the season. We partially knew why Conte wasn't playing him, but we didn't know when exactly Llorente would get his chance to really show what he's all about.

Turns out, all Llorente needed was a little bit of time — and Mirko Vucinic getting hurt a couple of international breaks ago — to get going again.

A slow introduction is exactly what Llorente needed to adjust to Conte's tactics and shake off the rust of basically spending an entire season on the sidelines. We bitched, we moaned, we asked "Where the hell is Llorente?" for weeks before he got onto the field for good. I was guilty of it as much as anybody else. We had an idea that Llorente was getting the slow-ish treatment, but who really knew for sure what was going on behind the scenes.

Now, we are seeing the full arsenal — no, not that Arsenal — of what El Rey León has to offer. This is the Llorente Juventus expected when they signed him this time last year. Beppe Marotta and his crew certainly knew there were risks involved because of how little he had played during his final season with Bilbao. But now they're getting the complete prima punta they had lacked for years.

The numbers? Of course you want to know the numbers.

Throw in his five Champions League appearances, Llorente has 11 goals in 18 starts (23 total games) this season. Toss in three assists to those goal figures and I'd say that's pretty dang good, especially when you throw in that he didn't play the first month of the season at all.

5 - Fernando Llorente has scored five headed goals in Serie A this season, more than any other player. Dunderhead. #LazioJuve

Regardless of the numbers, though, Llorente has given Juventus what they haven't had for a good amount of time — a great presence in the air that leads the forward line. Whether it's on set pieces or just in the build-up of play, the big Spaniard has become Juve's prime target man. People will point to the goals he's scoring, and rightfully so. But when it comes to just how much he has influenced the way Juve play, sometimes stats just don't do it justice.

Not bad for a free transfer, huh?

Conte's patience has paid off — big time. Heck, you could say that Llorente's patience is paying off just as much. He sacrificed a year of his career to make sure he got the move to Juventus he had wanted for so long. And now, every card he's being dealt and playing is coming up aces.

The best thing about all of this? It seems like Llorente is only getting better as the games and weeks go by.

Maybe Tuttosport will be able to come up with some nicer Llorente-related front pages in the near future. At least there's now something to actually write about in their newsroom. That should be enough.