Juventus vs. Sampdoria Preview: Round 20 — Cheaper by the Dozen

Share All sharing options for: Juventus vs. Sampdoria Preview: Round 20 — Cheaper by the Dozen

Nearly six days ago, Juventus made a nice little bit of history. Eleven Serie A games have come and gone and Juve haven't lost a game, seemingly dominating their opposition in the process. That's pretty good if you ask me. It's also something that set a new mark for longest winning streak in club history.

Judging by the simple fact that I'm talking about Juventus here, that's a pretty impressive piece of history.

Now Antonio Conte and his history-making squad is looking to do a bit more — extend the winning streak that much, much further. Not a bad idea considering the winning streak stands at 11 and counting and Juve are on pace for a triple-digit point total this season. That's pretty impressive if you ask me.

I'll just sit here and assume that Conte agrees with the previous paragraph. I know the guy likes winning games quite a bit. If you know otherwise, please let me know.

#Conte: We've enjoyed an extraordinary first half of the season, especially when you consider how the others have fared. #JuveSamp

#Conte: We take things on a game-by-game basis and tomorrow’s #JuveSamp is the most important as far as we’re concerned.

So now as we reach the latest most important game of the season, Conte's history-making bianconeros are aiming to push things to an even dozen when it comes to their winning streak as Sampdoria comes to Juventus Stadium for a Saturday night showdown.

And who am I to argue with Conte's belief that every game is the most important of the season? I think his last two-plus years speaks for itself. As you were, Mister. We're just along for the ride.

This has been a Juventus winning streak update.

Andrea Barzagli is back after his one-game suspension.

Juventus are up eight points on Roma in the standings.

Just about everybody who is eligible to play has been called up by Conte.

So much for this being a bad news section. Maybe I'll change it to "More Good News" next time around.

1. The impact that one Fernando Llorente has.

It worked in the last preview, so why not again, right? Maybe there is some truth behind that last sentence, maybe there's a bit of superstition that comes along with it all. Either way, Llorente bagged a brace and was a huge part in Juventus securing yet another three points and setting a new club record for the longest winning streak. It pushed his season tally to seven goals in 16 Serie A games — not a bad number at all when you consider the last time Juventus played Sampdoria Llorente was on the field for all of about a minute. I feel pretty safe in saying that El Rey León will be playing a few more minutes the second time around.

2. The impact that one Manolo Gabbiadini has.

Even with Domenico Berardi's ridiculous Serie A debut, Gabbiadini is still one of the best co-owned prospects Juventus currently has on their books. And even with the goals not coming with any kind of regularity this season, Gabbiadini is still one of Sampdoria's highest rated players, according to WhoScored. Just in the same kind of fashion as the season opener in August, a lot of eyeballs will be on the 22-year-old Gabbiadini when he plays against Juventus. It's only natural, I guess. I know I will be very interested in what he does. That's probably because he's good at game.

3. The impact that one Stephan Lichtsteiner has.

Much in the same fashion of Llorente, we saw the benefits of when everything is clicking for Lichtsteiner last weekend. It would be a lot to ask that he records two assists and a goal every game, but I wouldn't be opposed to it. (Who would?) Even if he didn't record an assist or two, Juve is so much more dangerous when Steiner is a threat down the right wing. He sends in crosses, Llorente has a chance to put a head on the ball and get more goals. And that's also something I'm not all that opposed to.

4. Does Claudio Marchisio get a start against Sampdoria after last Sunday's heroics?

As I signed on the Gazzetta's website on Friday, I noticed a little something different about their predicted lineup. 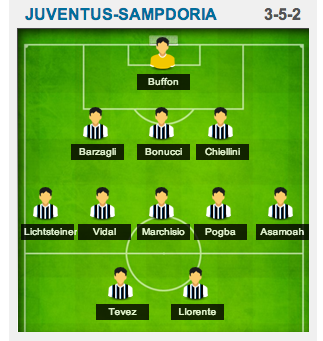 Yeah, that's Claudio Marchisio as Juventus' regista against Sampdoria tomorrow night. We'll see if it's right or wrong, but it's the one thing you might not have been expecting to see with everybody health and ready to play. It wouldn't be the first time Marchisio has been deployed in the middle of the midfield, but it's almost unheard of from the opening whistle with Andrea Pirlo completely healthy. Maybe La Gazzetta has a hunch or know something we don't about Marchisio's role against Sampdoria. Either way, it's got me intrigued — and that's just because I'm a Marchisio fanboy.

5. 'The threat of Sampdoria' tomorrow night.

That's how Conte described Samp at his pre-match press conference on Friday afternoon. See for yourself...

#Conte: We need to be alert to the threat of Sampdoria. They're in fine form and Mihajlovic is doing an excellent job. #JuveSamp

Sampdoria is a threat, you guys. If Conte says it, then I'll believe it. And it's not like he's totally coming out of left field — Sampdoria have been playing much better since Sinisa Mihajlovic has taken over as manager. The three clubs who have one loss over their last six league games? Roma, Fiorentina and...Sampdoria. That's not a bad group to be involved in, and it's no surprise Mihajlovic's squad have risen to 12th in the league table because of it. New manager boost in form? Maybe, but there's only one way to find that out — try to slow 'em down.