Share All sharing options for: How Antonio Conte got out-coached on a vital night in Munich

It's been almost 48 hours since Juventus were humiliated at Allianz Arena by a dominant Bayern Munich side and everyone and their mother have chimed in with opinions and analysis of each player's performance as well as the team's overall tactics. Danny's link-dump today, while certainly very well put together, didn't help anyone take the game off their minds either.

It would be fantastic if I could tell you what follows below will finally set you free of that sinking feeling that every passionate Juventus fan still has, but then I'd be definitely lying. However, instead of the usual game recap I do on this blog for most games throughout the season, let's switch things up and look at a couple components of Tuesday night's affairs that I noticed while re-watching the game. Maybe you'll find some of it interesting.

The obvious answer is "Bayern pressed high." Well, shockingly for such modern football times (/s), Bayern wasn't the first team to have pressed Juventus high from the very beginning. It's almost a given these days that if you press Juventus high you have a better chance of beating them. When this became evident a year or so ago, Conte didn't immediately address it.

Then Inter came to Juventus Stadium in November of last year and not only pressed high, but was well prepared for the attacking phase as well, executing on the counter with great pace and precision. Boom, Juve lost 3-1 and Conte finally started adjusting tactically as a unit. His solution? The MVP trio would sit deeper, start rotating to get rid of static markers, and move the ball side to side a lot faster. The forwards would become the playmakers and would come deep between the lines of the opposite team's defense and midfield to collect balls, and the wing backs would provide a constant link between all three lines of our team to stretch the attack and midfield of the opposing team and create gaps for our deeper-sitting forwards. That, and Bonucci and Pirlo would often try to pass over the pressing with long balls to on-rushing Giovincos and Matris (or any forward on the pitch other than Vucinic since they're mostly incapable of holding up the ball with any consistency).

Where did things go wrong against Bayern? Yes, all of our most experienced players started misplacing simple passes, made major mistakes, and couldn't get out of a funk caused by an early Bayern goal. But I'd like to focus on two key guys: Marchisio and Vucinic.

Antonio Conte is one ballsy mothertrucker. Despite playing with 2 forwards, Conte instructed Marchisio to sit high up the pitch and make offensive runs in the first half, hoping he can create an extra man against Bayern's defense and come up with an away goal. As Bayern pressed high and well, however, Marchisio presence in our own half would've been crucial to help the defenders take the ball out more successfully, especially through the middle. Check this instance out: 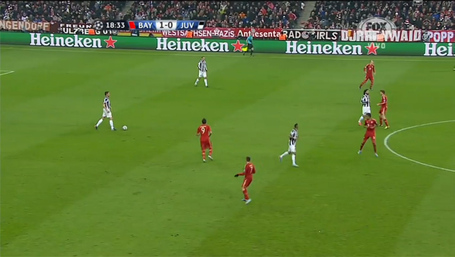 What do you think happened in the next five seconds after the screenshot above? You guessed it — Bonucci attempted a wild long ball towards Marchisio who was even further up the pitch than Matri and Quagliarella. Lahm tracked him back easily and possession was lost. This is what that looked like (sorry for the poor quality of the screenshot): 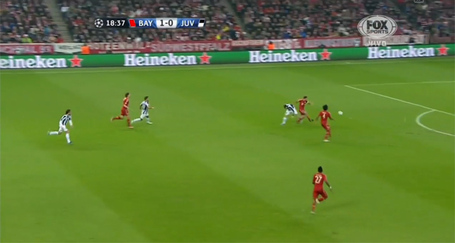 The key take-away from this strategy Conte employed: 1) Juventus needed a man plus in midfield, not a man minus. When many of us were wondering if Pogba would be playing IN ADDITION to the MVP trio in midfield to make up for Bayern's dominance in numbers in that area, Conte went the other direction and our team was often a man down both in the build up of play and in defending the quick attacks Bayern threw at us.

While most of the discussion was surrounding Pogba and the potential 3-6-1 in the comment section on our Blog before the game, one thing I was mostly concerned with was whether Mirko would make the game from the start. When I saw the lineups, I only tweeted one thing before the game began:

Vucinic will be sorely missed tonight. He's key to us settling down & keeping possession. Quaglia & Matri have huge shoes to fill #juventus

Was it the Inter game that convinced Conte to play Quaglia and Matri together from the start? Was it pure desperation as Mirko wasn't a 100 percent from the flu he had earlier in the week? Was it instinct? I unfortunately cannot answer that. Either way, the result was atrocious. Mirko Vucinic has become an indispensable part of our team this year, not because of his scoring (which would be typical for a forward), but because of his ability to control the pace of the game when Pirlo is taken out of the picture. In fact, even when Pirlo does have quite a bit of room to pass around, he often resorts to laying it off to Vucinic to make the final playmaking decisions in the last third of the pitch - that's how key Mirko is for us offensively.

Juventus moves the ball better with Mirko on, keeps possession, and makes most out of it when relying on Vucinic. Without him in the lineup, we're left to technically inferior players like Matri and Quagliarella to make first time passess behind their backs at targets they assume are in areas of the pitch without actually looking there first. How many times did this happen against Bayern? I started counting at one point and lost count.

We need a solid target man that can get the ball played to his feet, control it, draw defenders, and distribute it out wide or link up with a striker or an on-rushing midfielder. Other than Vucinic, we don't have a player that can do that. Without him, and with our midfield and defense taken out of the game, we currently don't have any way of playing successful football. This is a weakness Conte has yet to recognize and address, simple as that.

Did the early first goal affect a lot of the proceedings in the game against Bayern? Most definitely. But the problems for Conte as a tactical coach remain no matter if Buffon lets a spill in from 30 yards or if Pirlo plays his worst passing-rate game in a Juve shirt. Playing Marchisio high up the pitch for 45 minutes and not being able to adjust to losing Vucinic in a key game means there's still a good learning curve left for our young maestro.

The craziest thing is, Juventus is still very much in this tie. 2-0 is a result we can definitely overturn, I don't care who we're playing against. Will we, though? A lot of it will depend on how Conte sets up now without Vidal and Lichtsteiner in the lineup. If the first leg is any indicator, we shouldn't have much to hope for, then again this Juventus team is a resilient and motivated squad that works together. A bit of Conte ingenuity, a bit of luck, and a whole lot of Juventus character and I wouldn't put my money on Bayern just yet.