Let's look at the rest of the players

Continuing with the other two parts let's take a look at the players that have long contracts remaining.

Players with contracts expiring in 2016 and beyond 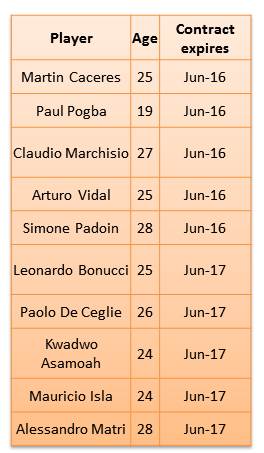 These are the players that on paper should stay with the club for three or more years. I say on paper because it won't be surprising if some of the names on that list are not with Juve next year. The long contracts given to the players above is not necessarily a sign of blind faith, more likely it is a way to amortize their cost or to buy the club time to develop the player.

These contracts are so far away from expiring that have no need to be revised and will not likely be touched for a while with a few exceptions, namely Vidal, Pogba and maybe Marchisio or Bonucci.

The Chilean has a low salary and is highly coveted by other clubs in Europe. Recently, Jupp Heynckes' agent went on record saying that Bayern offered Juventus 45m euros last year for the player. And the offers are not likely to stop there. I think Vidal is comfortable in Turin and is not pushing for a move. With that being said, he is 25 and his contract can easily be extended for two more years until 2018 with a modest increase in salary and a higher increase in bonuses. It is certainly not something that has to be done over the summer but could be looked at during next season.

Pogba is a totally different story. His salary is pretty low for what can be considered a starter over the next few years. The main issue with Pogba is his agent, Mino Raiola. Raiola went on record a few days ago stating that anyone that is interested in Pogba should contact him. Moreover, he said that contracts are meaningless if there is enough interest from a buying club and the player. In other words, he is already looking at suitors for young Pogba. The other option is that he is trying to push the club to revise Pogba's contract. This is one of those players that could easily have his contract revamped considerably and extended for a long period of time. Remember that Raiola is the same guy who was pushing for a Nedved move to Inter after he retired from Juventus. The guy is as loyal as Zlatan and has the means and know how to cause trouble. I would hate to see Juventus negotiating with Mino Raiola over a player with only 2 years left on his contract.

Marchisio and Bonucci are the other starters with contracts expiring in 2016. Given their age and attachment to the shirt I am not concerned with them leaving anytime soon. A revamped contract would be a reward for all their work and growth over the last two seasons.

With the exception of Caceres and Asamoah, all the other players on that list that were not already discussed above, could be sold or traded if more capable/promising replacements are brought in. Matri, Padoin and Isla are certainly expendable (the latter less so due to the high investment) if the price is right.

I imagine that over the summer the club will be willing to trade any of the players in the roster with the exception of the starting back three, Marchisio, Vidal, Pirlo, Pogba and of course Buffon. I also don't imagine they will sell more than one of the regular starters (i.e. Lichtsteiner, Vucinic and to a lesser extent Asamoah). Replacing some of the bench players with better alternatives can also contribute to making this team more competitive.

The team is well setup as is, but replacing one of Giaccherini with Andrea Poli in the center of the field will do wonders for us in the short and long-term. Those substitutes will allow the better players to rest during the season and will instantaneously raise our competitiveness in Europe.

It will be a busy summer for Marotta & Co. and it will be interesting to see what the long term plans for the club are as more quality is added. A telling factor of where we are headed would be to see who Juventus chooses to renew and pour more confidence into, and who the club chooses to trade.

Tell us what you think.