The temptation that is Zlatan Ibrahimovic returning to Juventus

Share All sharing options for: The temptation that is Zlatan Ibrahimovic returning to Juventus

Italian daily newspapers are like high school girls. They gossip — a lot. Some rumors take off and gain steam at a rapid pace, others get thrown away like a bunch of old socks during spring cleaning. It happens. But those that do stick and then go traction amongst the masses, well they just become something that might end up trending on the Twitter machine, then it peaks one interest.

Exhibit B: Zlatan Ibrahimovic coming back to Juventus.

Exhibit C: This from page of today's edition (Wednesday, April 24) of the Gazzetta with ultra-impressive photoshopping skills... 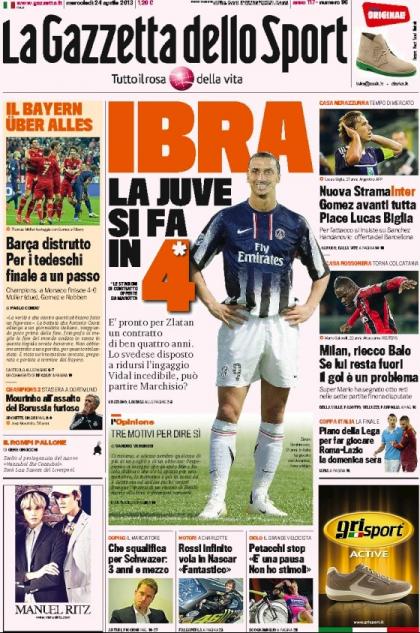 The quick version of what the Gazzetta is saying? Here ya go:

Gazzetta dello Sport reports that Juventus have offered Zlatan Ibrahimovic a 4 year contract, in which he will earn €7 mill per season..

Sure, the secondary headline of their centerpiece is that Claudio Marchisio could leave Juventus (lol), but the main argument still remains: The press loves them some Ibra-to-Juve talk. With the Scudetto all but won at this point, there's not much to talk about other than players coming to Juve and others leaving. It's just the nature of the beast. There's no need to continuously breakdown matches minute-by-minute to see where Antonio Conte got things right or wrong.

And with Juventus' search for a striker all but likely to be kicked into overdrive this summer, it's become a perfect storm of sorts. Almost too good to be true, maybe. I dunno.

What would need to happen for that to happen? Well, a lot. And that's why the press is talking so much about it right now. They want to figure out what will need to happen almost as much as us fans do. There's the transfer fee. There's Ibrahimovic's high-as-hell salary that would need to be figured out. (Translation: There's no chance in hell Ibra would make as much as he currently is in Paris if he were to come back.)

Beppe Marotta can say all he wants about all of the obstacles that would have to be jumped over for a move to happen, but the press will still link Ibra to Juve. It's out there. The wildfire has spread and there's nothing we can do about it because the Italian papers loves them some transfer rumors more than anything else in this current day and age.

But, man, it sure is tempting. Even with Ibrahimovic wearing an Inter jersey mere months after Juve were shipped out of Serie A, it's damn tempting. You add a player of his quality to what is already wearing a Juventus jersey and it makes you think happy, happy thoughts about what this team could achieve.

There's just one thing: It's just complete paper talk at this point. And for right now, we can't treat it as anything else.

As it happens: On the lookout for Juventus' next great goal scorer