If you need to read an intro, check out Part I of this series. Let's just dive into the next group of players

Players with contracts expiring on 2015. 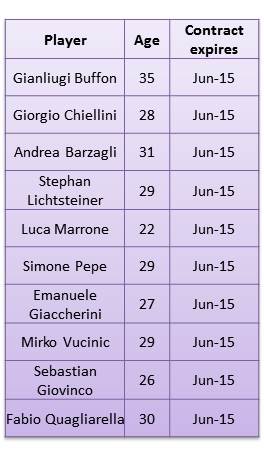 Buffon's contract was renewed a few months ago so it is unlikely that it will be looked at this summer. After signing his contract he said that he wouldn't want to steal from Juventus and that he will leave once he sees his contributions diminish. Talk about class!!! Buffon's departure in a few years (he will be 37 when his current contract expires) means that for the first time in over a decade Juventus will need to find a new number 1. I dread the day that happens but the management must start getting ready for such a day (see Part I).

King Giorgio's contract also expires in 2015. Unlike Buffon, Chiellini will only be 30 years old by then. I am sure a contract revision should be expected soon as I highly doubt the club would want to part with such a great defender. The only stumbling block when renewing Giorgio's contract will be his desire to test himself elsewhere. At 30 years old he may want a challenge outside of Italy (I don't think he will move to another Italian team as a professional) and may want to look into other leagues. With that being said, there are not many teams that can offer being competitive at the highest levels for years to come.

Barzagli's situation is a little different. He will be 33 in 2015 and is likely to have only a few years ahead of him after the summer of 2015. The club will be wise to wait one more year and see if Andrea keeps being his rock-solid-self by next summer before deciding what to do. Just like with Buffon, Juve must start thinking about life without Barzagli. Sorensen and Masi can help ease the loss of such a rock at the back but they have plenty to learn before they get to such levels. I imagine that when Barzagli leaves, the team will transition to a four man backline, at least for a while. Unless the plan is to move Bonucci to the right leaving space for young Luca Marrone.

The last defender of the bunch is Lichtsteiner. On the one hand, he will be 31 in 2015, his pace and stamina may start to suffer and his value will tank shortly thereafter (think Maicon). On the other hand his determination and drive will remain intact, and with a few tactical tweaks, he can continue to produce for Juventus (think Nedved, although he wasn't a fullback). The club will be at the crossroads with Lichtsteiner this summer. They could sell him for a significant price because his contract doesn't expire for a while. The problem is that the club will need to find a suitable substitute for that position. I really doubt that whoever we bring will be as good as the Swiss, at least not right away. A contract extension until 2016 may suit all interested parties, however, I can see the logic in selling the Swiss train. There is a reason why we have Caceres, and there is a reason why we spent 18m on Isla, and there is also fan-favorite Simone Padoin. There will be some growing pains, but I think these players have what it takes to make that position their own (minus Padoin). Moreover, the money raised from a Lichtsteiner deal can help other areas of the pitch. Isla and Caceres may not be as good as Lichtsteiner, but remember that Capello won a scudetto with Zebina at full back. Caceres and Isla are way better than the Frenchman, and with Lichtsteiner gone elsewhere, will enjoy increased playtime and all the benefits that it brings.

At 22, Luca Marrone will renew with Juventus (maybe not this summer but before long). He may leave us for a year or two to get experience elsewhere or he may stay with us playing vice-Bonucci, but rest assured, he will be in our books for a few more years at least.

Pepe's contract will depend largely on his form after his lengthy injury. The club will probably sit on this one for one more year.

Giaccherini is a few years younger than Pepe, he is well liked by the team and management and is happy with a substitute role at Juventus and why wouldn't he be. He plays a decent amount of time and contributes meaningfully when called up. His situation will largely depend on who else is brought this summer but given his versatility, I think Giaccherini's will stay with us for a little longer. I imagine the club will wait at least another year before making a decision. Giaccherini is the perfect player for trading with bottom table clubs for their young and growing superstars.

This leaves us the strikers. Vucinic's importance was highlighted in the Champions League quarterfinals. Although we are all dying for a top notch support striker I really doubt we will get one. If we do then I can see Vucinic leaving but not the way things are. The club will probably sit on this one for another year before making a decision. As for Quagliarella, as much as I like the guy and his PlayStation goals I think it is time to say goodbye. He has been underutilized this year and will likely be our new Bendtner or Anelka once Llorente comes into the team.

Giovinco's contract length was surprising. We bought him in 2012 and offered him only a 3 year contract. It may have been because his low cost was easy to amortize over a smaller period of time compared to say Vucinic's. Or may be because Giovinco or his entourage thought he could demand a much higher contract in one or two summers. As things stand he has been less than a superstar and I think the club will be wise to wait for another year. If he improves significantly then renew the contract. However, if he continues with his current form, then I think we can get a good return on our investment, not many Serie A sides will say no to having Giovinco in exchange for another player. His stock may also be high in Spain.

In Part III we will look at all the other players with contracts expiring after 2015. Don't forget to leave your comments below.