Crap game. Three points. Nothing much to see here.

You wanted style points? Nah, that didn't happen. Not even close.

You wanted three points going over the Juventus? Well, then you're in luck.

It was every bit of a boring, drab, (insert another word here) kind of game. But the end result was the same as seen the five previous times Juventus stepped onto the field for a Serie A game: Three points. And more importantly, Juve moved within four points of officially claiming Scudetto No. 31, which is pretty nice considering the May 5th target date stays circled.

Isn't getting three points in as many games as possible what this thing is all about? I think so. So does Arturo Vidal.

It was a difficult game for us today. Milan are a good team and it's never easy for us to play against them. It wasn't a great match, but we won and that's what counts. (via juventus.com)

Spot on. And thanks for keeping us awake with the goal, Arturo.

That's the funny — or facepalm-worthy — thing about this game: Take out Vidal's goal and it totally sucked. For as good as the Claudio Marchisio-Mirko Vucinic combo was against Lazio, it was the complete opposite against Milan. But Juventus being the very good team that they are, they just found a way to get three points. I can't really explain it sometimes.

Well, I guess I can in this case: Juve got a penalty and pretty much every Milan shot on goal went straight at Gigi Buffon. You can't ask for an easier day than that as a goalkeeper, guys. But it's not like Juve dominated possession like they did at the San Siro or blew countless numbers of goal-scoring opportunities. It was just an unexciting game, to say the very least, that Juventus won against a team you would've thought might play with a little more fire and motivation considering their current fight for third place.

And just for a reminder, how many points are Juve away from winning the Scudetto, Mr. Lichtsteiner? 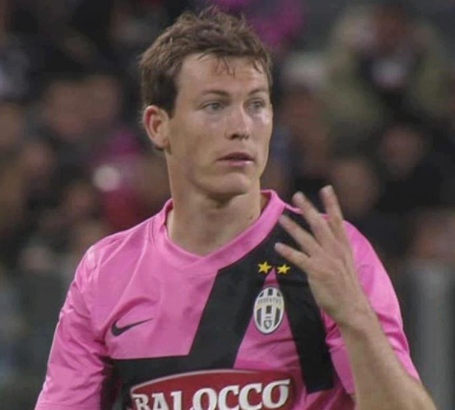 You're too kind, Steiner.

I'll end it on a serious question

Who had more touches today, the ref or Mirko Vucinic?

Thank you and goodnight.