Who stays and who goes? Looking at Juventus' current contract situations

A look at the contracts of Juve's squad

Share All sharing options for: Who stays and who goes? Looking at Juventus' current contract situations

Beppe Marotta has one clear task this summer: Improve the attack and add quality backups to an already talented team. Although he still needs to demonstrate he can deliver in the former, the increase in capital and prestige over the last year should prove his task easier. Also, last year he showed he can increase the quality of "reserves" (see Asamoah, Pogba, Peluso, and to a lesser extent Isla). I would argue there is a third task for good ol' Beppe: revise the existing contracts of current Juve players. With the economical demands placed on Italian teams and having players who have demonstrated to be worthy of the Juve shirt, this task may be just as important as the other two.

Players with contracts expiring on or before July 2014 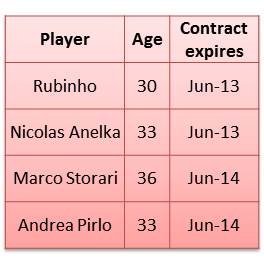 With all due respect, Rubinho and Anelka won't be missed by many once July 2013 hits. The Frenchman will for sure leave by the summer while Rubinho's contract must be examined in the context of Storari's future.

Until I started this article I had no idea that Storari's contract was expiring so soon. He is our Coppa Italia keeper and, barring a long-term Buffon injury, will remain in that position for one more year. At his age I really doubt there will be many clubs that could lure him away from the Bianconeri should Juventus choose to renew his contract until 2015.

I imagine Storari's situation will dependent on how our other keepers perform. If Leali or Branescu get Serie A exposure, I can understand the club not renewing Storari's contract and bringing one of the youngsters as Buffon's backup. This is such a tricky position because in this case Leali/Branescu will get at most 5 Coppa Italia matches in one year (plus any of Buffon's injuries or suspensions). Those numbers will likely hinder our young keepers' growth. I for one am ok with having Storari until 2015 and giving our youngsters plenty of time to grow in a Serie A club.

Rubinho's contract will depend on what happens to Storari. I highly doubt that Marco Storari will accept being Juve's third choice keeper behind Leali or Branescu (and with all reason). Rubinho on the other hand may be more likely to accept a 3rd choice role with the team should a youngster be brought as our number 12.

The one big name in the list is Andrea Pirlo. He is only 33 and a reference point for the team. Pogba has impressed many but he is does not have the passing range that Pirlo has and I think all will agree that the former Milan player has plenty to give when rested. I imagine that next year we will see more Pogba and less Pirlo as the season develops however, I think that Pirlo can still produce great displays if he is playing less regularly. The club and the player know that the time to say goodbye will come, but Pirlo will be a necessary weapon to solve some games. I don't imagine there will be many teams in Serie A who can boast having a player like Pirlo on the bench while their 20 year old wonderkid is tearing up the opposition. With this in mind I imagine that his contract will be extended by one or even two years. This will give Juve the time to transition to a Pirlo-less Juve. Pirlo just needs to be ok with a diminished role over time.

Part II of this article will be on the players with contracts expiring in June 2015.

Make sure to leave your comments on these players in the comments section.