Juventus midfielder Andrea Pirlo to be back in time to face Roma next Sunday night?

Share All sharing options for: Juventus midfielder Andrea Pirlo to be back in time to face Roma next Sunday night?

Tuttosport weren't messing around when they rolled out their front page on Friday morning. If you don't believe that last sentence, have a look for yourself. The little picture below this paragraph is the exact front page that Tuttosport put together in their design hug a little over 24 hours ago. 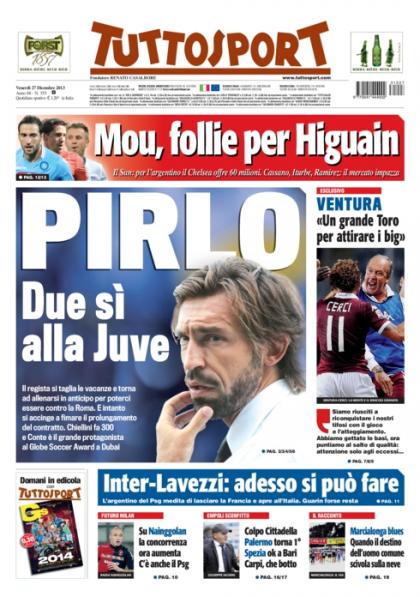 Now that I've got that out of my system, more important matters.

The gist of what Tuttosport's centerpiece is telling is twofold: 1) Andrea Pirlo has shown up to Juve's training grounds in Vinovo a few days earlier than almost all of his teammates are due back from holiday to try and get fit in time for next Sunday night's game against Roma and 2) Pirlo is preparing to possibly sign a contract extension with the Old Lady.

And while I'd love to write a post that has a title of "OFFICIALLY OFFICIAL: Andrea Pirlo signs Juventus contract extension" in the very near future, Point No. 1 is a little bit more of a pressing matter at this point in time.

Pirlo has been out for the entire month of December outside of a couple minutes against Udinese on Dec. 1. The diagnosis was that the bearded maestro would be out at least four weeks, thus putting his status for Juventus' showdown against Roma in Turin in complete uncertainty. The recovery time for Pirlo's injury was a month at the very least — which, according to sketchy match, would mean he'd

The question is this: Will Pirlo be ready come next Sunday night?

That's what we're all waiting to see.

The first couple of days of full-squad training will certainly give Antonio Conte a good idea of just where Pirlo stands in terms of his fitness. Considering there wasn't much at all being released when it comes to Pirlo's recovery before everybody went on Christmas holiday, only Conte truly knows where the 34-year-old midfielder stands health-wise.

But seeing as Pirlo is back working out before anybody else, it's a good sign...right? Maybe this was the plan all along so that he doesn't fall behind on his rehabilitation routine. Maybe it is something else entirely.

What we do know is this: Pirlo seems to be busting his tail to get fit for Juve's showdown with Roma. And that, minaly because Juventus with Pirlo is obviously better than a Juve without him, is a good thing.