Run for the Hills: Juventus just lost the Scudetto!!!!! Or maybe not

The eight-point advantage that Juventus had before the winter break has now been reduced to 3, and this has caused many to question what this means for Juve in search for the double. Here is my call to peace and calm in spite of this non-ideal scenario.

Share All sharing options for: Run for the Hills: Juventus just lost the Scudetto!!!!! Or maybe not

During the winter break all Juventini were proudly getting their sowing kits ready for the next scudetto on our shirt. After all, there was no way that any of the other teams behind us could recover from our lead. A week after Serie A started Juventus are only three points clear of the top of the table and a sense of panic among some tifosi is beginning to develop. This sense of panic mainly comes from the media, and why not? they can only benefit from an exciting Serie A championship. So if you want to go freak out, go ahead, be my guest, contrary to what this title says I believe Juventus are still on their way to the scudetto. Before we go there, let's look at why we have done so poorly so far.

In addition to loosing Kwadwo Asamoah to the African Cup of Nations, Juventus are undergoing the worst injury crisis since Conte took over. During the last few matches Chiellini, Marchisio, and to some extent Mirko Vucinic have been sidelined due to injuries. That is our starting defender, midfielder, and forward. I can't think of many teams in Europe, let alone in the peninsula, who could cope with loosing players of such caliber without skipping a beat. How do you imagine Napoli will do if they lost Hamsik and Cavani? Or Lazio without Klose and Hernanes? Or Inter, if they lost the FIGC? (couldn't resist).

Any team that undergoes such sudden and dramatic changes is going to suffer. Of course you may be dissappointed with the way that the bench has performed but it is worth noting that some of those players have had very few matches. Take De Ceglie for example: He has played a total of 496 minutes all season, this is a little over 8 hours (or 5.5 matches). Asamoah had that many minutes by the time Juventus played Fiorentina in September.

Loosing Chiellini and Asamoah has created a big question mark on the left hand side of Juventus team-sheet. Both Caceres and Peluso need more minutes playing with the team to improve their understanding. This is exactly why some have suggested Juventus switch to a 4-3-3 for the next few weeks to allow things to stabilize.

Juventus have a points/game ratio of 2.3 for the months that Conte was banned and of 2.2 since his return. Hardly different. Moreover the worst points/game ratio came in November where Juve only obtained 4 points from 4 games.

Now, take a look at how last season (red) compares to this season (green): 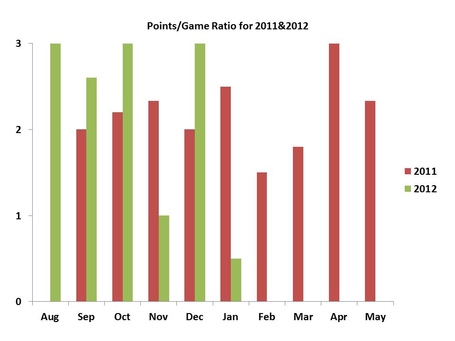 Only in November have Juventus got less points/game compared to last season. January of course hasn't started nearly as well as last year but there are still more matches to be played but there are two reasons for that: Champions League and our latest Coppa Italia match.

We knew the Champions League was going to take some points away. That much is clear from our dip in form in Serie A in November. But Champions League has also a large effect in January. Most teams prepare their winter training to hit top form when they need it most. Last year Juventus needed to hit top form during March and April and this year is no different (just look at the graph above).

Since Juventus will be competing in Champions League until at least next March (and hopefully beyond that), the team must be able to take on three competitions for an extended period of time. That means that during the winter break and in January Conte will emphasize fitness training. This of course means that the team will be most tired during the next couple of months.

On the same note, the team is not only more tired from the extra fitness training but from the extra Champions League matches we have played so far. Juventus have had 6 more matches so far than at this point last season. Keep in mind that those midweek matches involved traveling and playing the European reigning champions and Shaktar Donestk.

And it is not only physical tiredness but also mental tiredness. When you have to be at your best week-in and week-out your mind can get more tired than your body. A large number of our players have been doing this since September 2011. Also, remember that many of those players took part in the Eurocup making it to the final.

It would be unfair to forget that the last two Serie A games happened at both ends of a Coppa Italia match against AC Milan. Now, AC Milan are not the team of Arrigo Sacchi or Capello, heck, they are not the Milan of last year, but making it to the next round of the Coppa Italia was very important for the team and should be important for us. Before the last two Serie A matches, Conte had to make decisions with the Coppa Italia in mind. For example, can Vidal handle playing against Sampdoria and then against Milan? Maybe it would be better to rest him against Sampdoria and have him ready to go against Milan. Afterall, Milan are the tough opposition while Sampdoria could be beaten with a depleted team, right?... WRONG!

The Parma clash was also going to be affected by the Coppa Italia match. A number of players were tired and it showed. Giovinco clearly stands out as the player that suffered the Coppa Italia match the most. Moreover, Conte was unsure about fielding players that had played 120 minutes of football.

With all that in mind how can we still be in the run for the scudetto?

AFCON and injuries are temporary

Asamoah will be back sooner or later, Marchisio should be available by next week at the latest, Vucinic is recovering... Bendtner??? Never mind.

Antonio Conte is leading this team, you know, the same guy that made Bonucci consistent, the same guy that changed formations to get the most of the players. I am sure that Caceres can improve from the Milan and Parma matches (I didn't think he did so poorly). Also, you can trust that Conte will move to a 4-3-3 if it means fielding the best team.

I will be the first to admit that Juventus played one of their worst matches under Conte against Parma. With that being said, the latest results have come from fortuitous episodes. An unlucky bounce of a Sampdoria player led to the equalizer. A comedy of errors between Vucinic, Conte, and Caceres led to the tying goal against Parma. If one of those incidents hadn't happened we may be higher up in the table.

Player by player (including the bench) Juventus has the best team in Italy by a large margin. Juventus also has one of the greatest (if not the greatest) coach in Italy at the moment. Over time, the individual errors will balance out, but the raw quality of the team, coaching staff and management will show.

So what this is all of this about? This was not meant to be a list of alibis of Juventus' poor performances in their last two matches but a reassurance that this is normal, and we will be back to our winning ways soon enough. So, don't run for the hills, at least not yet, Juventus are still the most likely team to win the scudetto. And if I learned anything from last season, is that if Juventus had the mental strength to come back from -7 points in February, against a team that included Ibrahimovic, Thiago Silva, and company, they have the mental strength to administer their +3 points advantage.