Share All sharing options for: Juventus 2:0 Chievo - Quagliarella Shoots Down the Flying Donkeys

Juventus hosted their second game of the season against Chievo. The Flying Donkeys have been a tough opponent as of late. Last time Juventus hosted Chievo, the bianconeri had a very hard time penetrating their defense. And once they finally did, Chievo found a way to tie the game. That was the second tie of four consecutive ones that put Juventus five points behind league leaders AC Milan.

How things have changed since then!

Juventus faced Chievo with a rotated squad always looking to take the initiative. They dominated possession and controlled the match. However, for the first 60 minutes, it looked like Chievo may once again walk out with a point from Turin. But Fabio Quagliarella had a different idea. In five minutes, Eta Beta scored two goals, allowing Juventus to record their 14th consecutive victory in the last 15 Serie A matches. Review after the break.

Against Chievo, Conte showed that he is not afraid to rotate his regular starters and that he believes in almost every single member of the squad at his disposal. Lucio, Pogba, Isla, and Quagliarella were given their first starts in official matches. Although there was an evident, albeit expected, lack of understanding from some players, Juventus dominated the match from beginning to end. The bianconeri recorded 27 shots (9 on target) compared to Chievo's 6 (2 on target). Moreover, by the end of the match, Juventus had 62% posession and twice as many corner kicks. However, although the score and statistics suggest this was an easy game for Juventus, the reality is far from that. 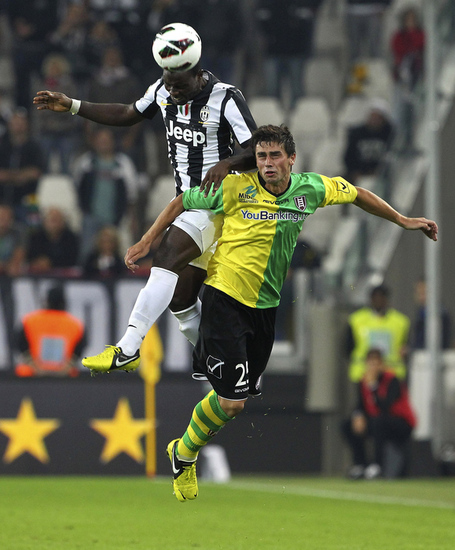 One of the main criticisms of the last Juventus-Chievo match was the bianconeri obsessive passing. It looked like no one wanted to kick the ball from outside the 18-yard box. This time it was a different story, Juventus recorded 7 shots from far away forcing Sorrentino to display his A-game. That is not to say that Juventus didn't try to pass the ball to more promising positions. Giaccherini and Vucinic enjoyed the two best chances of the first 45 minutes. At the other end, Chievo took 3 shots that were off-target or easily saved by Buffon.

Juventus came into the second half with the same determination, however, Chievo also came out equally organized. The game was one of those that needed a moment of magic to turn things around. Enter Fabio Quagliarella, the hero of two years ago. From a corner kick, Eta Beta gifted us one of his classic Playstation goals. From there things became a lot easier for Juventus. Chievo had to move further up the pitch, leaving holes that our midfielders and attackers could exploit. Five minutes after his first goal, Quagliarella doubled his tally with a goal similar to the one he scored against Petr Cech last Wednesday. From then on, Juventus dominated the match, and Chievo decided to save their energy for their midweek encounter.


Buffon 6.5 His score is low not because he played poorly but because he had so little to do. His positioning was impeccable and had no troubles organizing his defense.

Lucio 6.5 Played a decent game using his physicality to protect the ball from the Chievo players. Although he is slow, he showed he is more than capable to play against teams that want to sit back and defend. 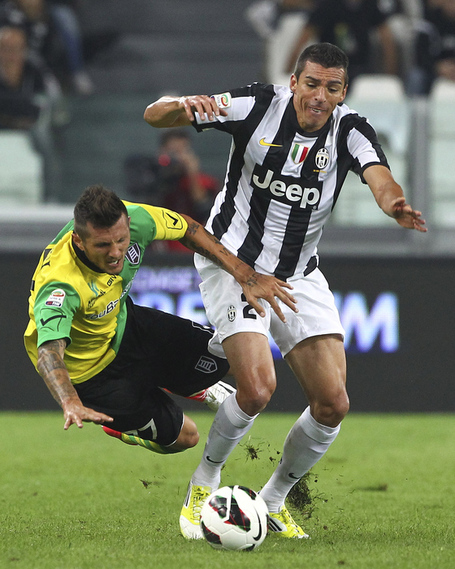 Bonucci 7.0 In the absence of PIrlo, Bonucci was tasked with playing the ball from the back. He was adventurous with his passing finding his target most times.

Chiellini 7.0 King Giorgio did not try hard passes but was instrumental in building up play from the back. He had 101 touches on the ball by the end of the match and a few strong tackles that showed the Chievo players who is boss on the left side of defense.

Isla 5.5 Mauricio clearly needs more playing time. He lost the ball many times and seemed lost in Conte's setup. Most of his lack of understanding comes from him being injured during the summer. With this being said, he had a couple moments that showed how promising he can be for Juventus in the future.

Marchisio 7.5 He ran, he created, he passed, he broke-up play. In a midfield full of substitutes, he showed why he is a regular starter

Pogba 6.0 He tried to get involved, but it seemed his teammates do not trust him with playing PIrlo's role yet. Slowly grew into the game. He is a promising player, but has a world of growing to do yet.

Giaccherini 6.5 The little goblin showed his technical ability all throughout the game. He could have scored once but Sorrentino was having one of those games he always has against Juventus. His versatility was evident when he switched from midfielder to winger back to midfielder in a matter of minutes.

Asamoah 6.5 A little more subdued than in other performances. He did everything he had to, but was not a game changer this time (not for lack of trying).

Vucinic 7.0 Created plenty of chances and could have scored a goal or two. 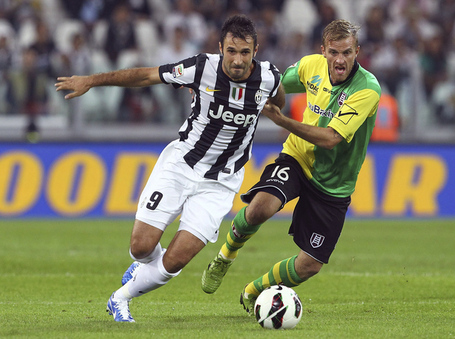 Quagliarella 8.0 Without the brace, his ranking probably would have been 6.5. But after his two goals, it is hard to argue that he was the MOTM.

Vidal 7.0 Appears to be fully recovered from his Chelsea injury. Came in and showed how big of a presence he can be in the center of the park.

Conte/Carrera 7.5 Saw the potential of Quagliarella when a few of us had given up on him. Also, managed to rest some key players ahead of the Fiorentina and Roma matches.

- Can you imagine being Chievo's right back? If you are lucky enough to get past Asamoah, you look up and see Giorgio Chiellini? It would be so demoralizing.

- Was it just me or did Juventus players avoid passing the ball to Pogba?

- Quagliarella's three goals in the last two matches are going to give Conte a selection headache. I love it when our coach has a hard time picking up his starting eleven because his options are all good.

- The next two Serie A matches are going to be important in the scudetto race. Fiorentina already dropped points today, Inter and Roma have dropped points already. Napoli also tied. An it is hard to believe that any of the other contenders are going to win the first 6 games. Creating a cushion at the top, without Conte on the sideline would be quite an accomplishment for this team.

Juventus won their fourth game in a row this season. Quagliarella is back. Pirlo finally got some rest. We went to bed as only leaders in Serie A this season. Need I say more?