Before we begin to discuss the match that is right in front of us, I want to take you back to the last time Juventus were facing Chelsea in the Champions League. It was a different time, without a doubt. Different coaches were in charge of deciding the tactics, different management was wasting money on stupid signings. Different players wearing the famous stripes.

Understandably, the lineups were different that night, March 11, 2009, at the Stadio Olimpico in Torino. Of the Starting XI for Juventus, only three — Gianluigi Buffon, Giorgio Chiellini, and Claudio Marchisio — remain in the fold. Most of those have either been sold for peanuts or moved on to another team and phase of their career, be it retirement or a different league.

What am I trying to say with all of this?

Guess who's back, Chelsea. 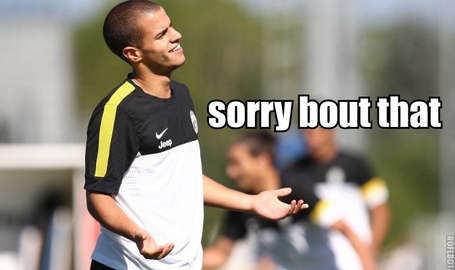 To me, it only makes sense that in Juventus' return to the Champions League, our beloved Old Lady plays the team that won it all last season. This is the chance for Juve have to show everybody who doesn't follow them on a regular basis that they are a force to be reckoned with. This is Antonio Conte's Juve, not the one pieced together with clearance-rack tape by Alessio Secco that went crashing out against Bayern Munich the last time they were in the Champions League.

This is the game that everybody will be paying attention to. This is Wednesday night's Main Event. People will be talking about Chelsea and how they are defending their European crown. I wouldn't mind after 90 minutes that Juventus was the team dominating the discussion.

It's the Champions League and Juventus are back in it. What more do you want? This is awesome. Let us celebrate.

To be frank, there's not much of any bad news outside of Conte hanging out in a luxury box instead of screaming his lungs out on the sidelines. The squad is basically as healthy as it can be, so there's nothing to worry about there.

Yeah, all good to go. By the time you read this preview, the players and coaches have already arrived and settled in London. Let's just let this song ring in our collective heads for the next day or so.

Wait. That was three years ago. Okay, for real now...

That was pretty damn easy to figure out, I must say. What a genius.