Yes, Juventus' chase for a new striker has gone from targeting one of the great youngster to one of the best La Liga has to offer, to uhhhh...Nicklas Bendtner? Yeah, color me not impressed. At all.

Nicklas Bendtner has completed a move to Juventus after the club agreed terms with Arsenal for the player’s services.

The 24-year-old Danish international joins on a season-long loan with the option to make the move permanent in the summer.

Bendtner is obviously not the player any of us imagined arriving us Juventus' summer striker signing when the transfer window opened a few months back. But this is what we've come to. Not because Juventus is a bad club, but because signing a truly world-class striker isn't an easy thing to do.

So, on to Bendtner.

He's a huge target, standing 6-foot-5. Sure, he's only 24 years old, but he hasn't taken that next step to being a consistent striker. Hell, some may say even a very good one. And that's the problem with a move like this. It's not a step forward. It doesn't make the team better. We saw Beppe Marotta add quality all throughout the squad this summer — except at the position where it was incredibly necessary. 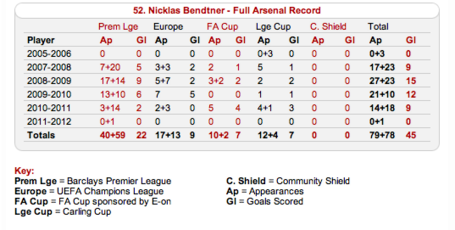 Do those stats impress you? Yeah, me neither.

In conclusion, meh. This is just so freaking meh. We all had high hopes for this transfer window and then this anti-climactic conclusion to the hunt for a striker. If this is just some sort of place-holder for a larger move in January, then I'm a little bit more accepting of it. I just don't know. I commend Beppe Marotta for the job he did building a squad with incredible depth. But this team still lacks that genuine goal scorer up front. If Alessandro Matri wants to return to that 20-goal pace he had last season, I'd welcome that with open arms. Until then, though....