What better way to welcome calcio back than by bringing a shiny new cup to our shiny new stadium. Including this year, Juventus have played the Supercoppa Italiana eight times, winning five of them, same number of victories as Inter Milan and one shy of AC Milan's six Supercoppe record. Hopefully we will be tying or taking over MIlan's record sometime soon.

As most cup finals, this game had plenty of background stories: First, the humiliating defeat that Juventus suffered to Napoli in 1990 -that 5-1 defeat is the largest margin in the history of the Supercoppa; second, our pre-Conte history with Napoli, a club which we couldn't beat even after being up by two goals after 55 minutes at home (watch it at your own risk); third, our most recent history with Napoli, in my opinion the toughest opponent we faced last season alongside Udinese; and fourth, the current scomessopoli scandal which prevented our coach from being present. Take all these four ingredients, mix well, add a few nasty challenges, the summer Cavani rumors, and a referee that wanted to be noticed, and you have one of the most entertaining matches I have seen in a long time. So what happened?

Review after the break.

If you asked me which club has caused Juventus most problems in recent times, I wouldn't hesitate to say Napoli. Take this for example: Napoli were the only club to score more than two goals against Juventus last year. And of course who could forget, they were the only side to defeat Juve since Conte took over (friendlies excluded of course). And that is only in the last year. Right after the Coppa defeat, Juentus knew they would have a chance for revenge in around three months. And revenge we had.

Juventus started the game dominating possession and had Napoli cornered for a good part of the first 20 minutes of the match. However, just like last year, once we got close to Napoli's 18-yard box, we looked toothless. I am looking at you, Ale Matri. He is a good striker but he simply does NOT fit Conte's system. It is no surprise to me that under the 4-3-3 system (first half of the season) he had no trouble scoring, however, once we moved to a 3-5-2 (second half of the season) he just couldn't score.

Even though Juventus couldn't score, they were so dominant that I was convinced that eventually we will put one in, and cruise through victory. Of course Napoli wasn't going to let that happen. After 26 minutes, Pandev put Cavani through on goal while the Juventus defense went to sleep. Buffon miraculously got a hand on the ball when Cavani was trying to go around him, but it wasn't enough. The striker turned around — Napoli 1, Juventus 0. 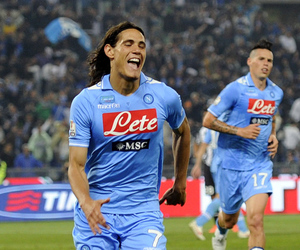 After the goal, the Bianconeri had their worst minutes of the match and were lucky not to concede a second. With Conte not on the bench, it seemed like the team struggled to realize that his calming presence would be gone for a while. Here however, is where Carrera stepped-up. He directed the team and slowly brought calm to the bianconeri players. Almost 10 minutes after Napoli's goal, Juventus would tie the match. Vidal crossed to his left to find Asamoah. The Ghanian player showed why he is so highly rated in Italy and scored a beautiful goal on the volley. Juventus 1, Napoli 1.

After the second goal, however, Napoli were not sitting back anymore. A ball came to the right side of the field that Bonucci should have cleared or controlled. The defender did neither, instead, he let Pandev get ahead of him and while trying to clear provided an assist to send the Macedonian through on goal. Pandev chipped Gigi. Napoli 2, Juventus 1.

Carrera: Ok guys, we still have 45 minutes to go. Let's win this for Conte. Vucinic, go shave that thing off your face, it looks ridiculous, and then go warm up, you are going in.

Mazarri: Ok guys, we are winning, time to break some legs.

The introduction of Vucinic for Matri caused a lot of trouble for Napoli. During the first half Matri was marked by one of the back three while the other two double marked Giovinco. During the second half, both Vucinic and Giovinco alternated dropping back giving Juventus a numerical advantage in midfield. Moreover, the VuVinco partnership stretched the Napoli defense opening up spaces that didn't exist when Matri was around.

After half time, Vucinic hit the post once, had goal saved in the last few meters, and sent Giovinco through on goal. In short, he changed the game. The cherry on top, was when he won a penatly after 70 minutes of play that Vidal converted sending De Sanctis the wrong way. Juventus 2, Napoli 2. 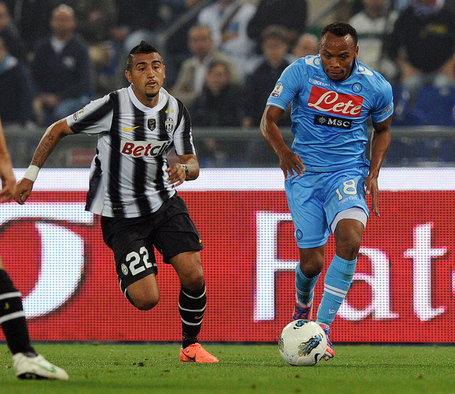 Not much happened until the last few minutes of regular time, at which point Napoli decided to hit the self-destruct button. Pandev got red carded for something he said to the linesman, Zuniga got his second yellow for fouling Giovinco, and Mazarri was sent off.

At this point Juventus needed to score at least once more and Napoli needed to force the game into penalties. Juventus got their wish only 7 minutes intro extra time. Pirlo crossed the ball from a free-kick on the right, De Sanctis came out to punch the ball missing it completely. The ball fell to Maggio who put it in the back of the net.

A few minutes later, Marchisio would give us another technical gem. Il principino brought down a long ball with one touch to put Vucinic one-on-one in front of De Sanctis. Vucinic did what Napoli failed to do when they were ahead, and put the game to rest.

When the game finished, Napoli decided to boycott the awards ceremony by staying in the dressing room. Buffon lifted the cup for the first time since he took over as first captain of Juventus. Hopefully this becomes a common sight over the next few years.


Buffon 7.0 He had little to do in the Napoli goals. If anything, he almost saved Cavani's first goal. He still needs to work on his understanding with the defense.

Barzagli 6.5 The best of the back three. Lucio should take some notes from him.

Bonucci 5.0 He should've stayed with Cavani during the first goal and he should have cleared or controlled the ball before Pandev went through on goal. He also lost Cavani in what could have become a 2 goal margin for Napoli.

Lucio 5.0 He was equally lost during the first goal and pushed forward too much for my liking. He still needs to learn the mechanisms but the fans' patience is starting to run short. 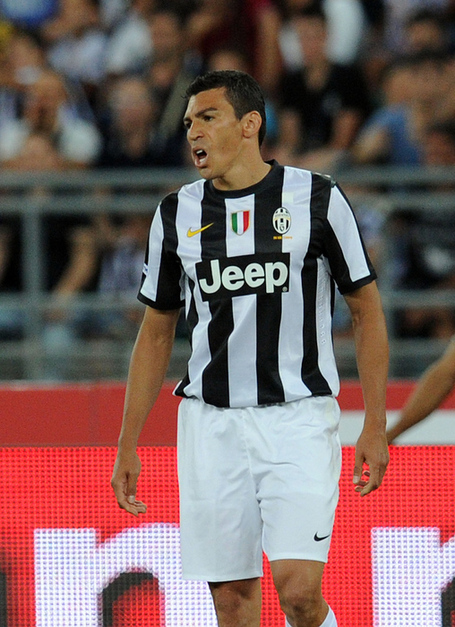 Lichtsteiner 6.5 A constant threat during the first 20 minutes of the match. Defensively, he was caught too far up during Pandev's goal but he can hardly blamed for that given that Bonucci clearly messed up on that one.

Marchisio 7.0 Had a solid game, if you didn't noticed him, it was because he was doing a lot of the dirty work. The assist for Vucinic showed that he hasn't lost his touch since last year.

PIrlo 6.5 He had a poor game by his standards. He didn't get the ball as much and was not involved in creating too much. This of course has a lot to do with the tight marking Mazarri put on him. It is good to know that Juventus can take on a club of the stature of Napoli even when PIrlo has an off game or is properly marked.

Vidal 7.0 Captain Hook had a solid game as usual. He wasn't the ever present player we have come to love, but, given that it is August it is totally understandable.

Asamoah 7.5 He was the MOTM for me. Never mind the goal, the guy runs tirelessly. Asa will certainly challenge Lichtsteiner and Vidal on the "who has the most lungs" competition. Last year, Vidal and Marchisio tired and it cost Juventus points. I think this year Asamoah will help turn some of those ties into three points.

Giovinco 7.0 He wanted a goal so badly, unfortunately, it never came. He has the right attitude and skills to match. He will certainly be one of those players that singlehandedly wins us matches next year.

Matri 5.5 We know he is good, and it would suck to see him leave, but Conte has chosen a 3-5-2 where he simply does not fit.

Vucinic 7.0 He came in and changed the game. After the Supercoppa, it is going to be tough to bench him.

- The referee has been scrutinized because of his decisions on the penalty, and the two red cards.

The penalty was one of those that you get 50% of the time and you don't get the other 50% of the time. This time, the referee chose to blow the whistle, end of story.

The Pandev red card is because of something the Macedonian said to the referee. Although Pandev is no angel, at the end of the day, it is the referee's word vs. Pandev's. In an age of guilty until proven innocent, I don't feel too bad.

Lastly, the Zuniga red card. Some news sources say that there was a foul on Zuniga before he fouled Giovinco. And it is true, Vidal fouls Zuniga seconds before the Giovinco incident. If we go by that, then we should just stop watching the game. Players know that if a referee does not blow the whistle you play on, nothing new there.

Napoli chose to play a physical match, and the referee started to call fouls for both teams at the same time. If Napoli played more football and less wrestling they would have won the cup.

- If Asamoah keeps his current form, De Ceglie is going to find it hard to get his place back.

- Chiellini and Caceres can't recover soon enough. With Caceres' pace or Chiellini's marking skills I am sure that Napoli would have scored at most one goal.

- Carrera did well for his first match. He was almost louder than Conte, which I think confused the players.

- Since Conte took over, we have competed for three cups and won two of them. Kudos to the coach, the players, the training staff and the management.

Two of the best teams in Serie A faced off in a game that was extremely enjoyable to watch. Napoli played a physical game, while Juventus did not change their possession based approach from last year. Napoli's approach forced the referee to become a protagonist of a game, that saw Juventus have the lion's share of the ball. Although everyone is focusing on the referee's decisions, no one should take away the fact that Juventus played -and won- a well thought-out, organized match, in an inferior physical condition. In a game where three of the goals came from childish defensive errors (Maggio included), the team had the grinta to come back and win he first competitive game without Conte on the bench. It won't be an easy road, but if the players keep the same never give-up attitude, we may be able to weather the storm until Captain Conte is back. Giovinco and Asamoah looked great, while Lucio still needs more work. Regardless of what happens with Conte, the players need to continue to give the coach and the fans a reason to smile, just like they did last Saturday.