There was massive a amount of disappointment. There were plenty of sad faces from those donning blue jerseys. There were even some tears. The announcers didn't need to say anything special and try to capture the moment with a few choice words they thought were absolutely perfect.

Yet as the final whistle blew and the Spanish players celebrated their second consecutive European Championship title, there was only one question left to be answered: Italy, what the hell just happened?

You could suggest the major cogs in the Italy squad were worn out from their victory in the semis, and you'd certainly be right. This Italy squad worked as hard as any other team in the Euros even before the final against Spain. And if you don't feel that way, maybe you should take a look at what Claudio Marchisio was dealing with just a few days ago.

Or you could point to the piss-poor luck Italy had throughout the game — mainly the loss of Giorgio Chiellini after just 20 minutes or Thiago Motta's hamstring blowing up on him as he looked to push forward in attack five minutes after replacing Riccardo Montolivo in the second half. The latter, of course, left Italy with 10 men on the field for the final 30 minutes because Prandelli was unable to field a replacement because there were no substitutions remaining.

But above all else, Spain played an absolutely brilliant 90 minutes of football. They pressed, and pressed, and then pressed Italy some more. It was really was just an absolute clinic, seemingly a sea of red around the Italian players for almost the entire game. This was Tiki-Taka executed to perfection and Italy could really do nothing about it — and that's even before they went down a man in the second half.

Nobody else in this tournament could've beaten Spain the way they played Sunday. Not Italy, not Germany, not Portugal. Nobody. This was the unstoppable force a lot of people thought they would see throughout the past month and why they were the favorites to repeat. This final really did showed that Spain are on a different level when they are firing on all cylinders. 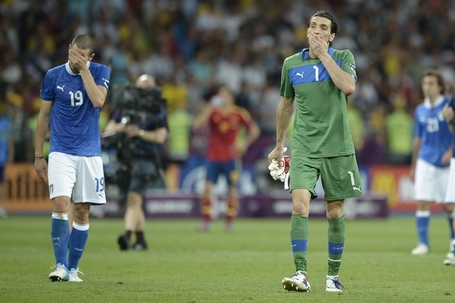 Buffon: 6 - People can do the knee-jerk reaction and jump on a goalkeeper after his team allows four goals, but not this guy. Ask yourself this: How many of the goals were Buffon's fault? The answer is a resounding zero. San Gigi really had no chance to do anything on all four of the goals and to blame him would be foolish.

Barzagli: 5 - Can you remember the last time Andrea had a terrible game? I can't either — and that's why his performance today was so unexpected. Barzagli just happened to have his one off day in the past 18 months be in the Euro 2012 final.

Bonucci: 5.5 - Much like the entire starting lineup, his effort in the final doesn't reflect how well he had played leading up to the loss. Got torched by the speedy and incredibly impressive Jordi Alba on Spain's second goal, which makes sense seeing as Leo has never been one to match speedsters step-for-step in his young career.

Chiellini: 5 - The injury problems that had seemingly disappeared against Germany unfortunately returned at the worst possible time for Giorgio. However, it's not like Chiello had started the game out all that well, getting beat by Cesc Fabregas for Spain's opener. One last message: Just get healthy and we'll see you in a few weeks.

Pirlo: 5.5 - He had tons of room to work his magic against England and Germany, but didn't against the now-two-time defending champs. Like pretty much all of his midfield mates, things were just so congested in the middle of the park that things never got going the way they had in Italy's previous two games.

Marchisio: 4.5 - For five games Il Principino had worked his tail off, doing the under-appreciated work of the man who simply ran around. That was more formation than a knock on the player, as we know. But with Spain overloading the midfield, Marchisio disappeared. The ones who unfairly put him under the microscope will point to this game as to why he shouldn't be playing as much as he has, but as I saw somebody say on Twitter later in the day on Sunday, look what happens when Claudio does struggle to get involved. 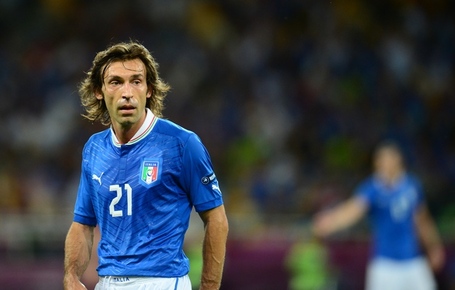 1. As I stood in a bar surrounded by a bunch of baseball fans who didn't really know anything about Italy or Spain, I couldn't help but think what this game might have been like if Italy went with a 3-5-2 formation. We all saw how well it worked against Spain and the 4-3-1-2 really allowed Spain to compact things and outnumber Italy in the midfield.

2. Speaking of the formation, if Cesare Prandelli wants to play with a trequartista in the future, can we get somebody who is actually a natural trequartista? That'd be nice, wouldn't it?

3. There will be those who say "I told you so" when it comes to Italy in this result. There will always be those naysayers who will never say that Italy made progress this tournament. But I'm going with this approach: I certainly didn't expect Italy to make it this far. And to be honest, I didn't really have any kind of concrete thought of how far Italy might go in this tourney. But if you think that Italy didn't deserve to be in the final or they lucked their way there, well, I don't know what to tell you.

4. Saw this stat as I was putting the final touches on the match report:

Iker Casillas hasn't conceded in his last 990 minutes worth of knock-out matches at major tournaments. -

That is absolutely nuts.

5. This past month was the beginning of one hell of a busy year for our Juventus boys who also happen to represent the Azzurri. They'll take a couple weeks off for vacation, but when they return, it's full speed ahead on three fronts — Serie A, Champions League, and Coppa Italia. There's also World Cup qualifying and the Confederations Cup this time next summer. Enjoy your rest, fellas. There won't be much time off in the next couple of years.

6. Last, but not least: ALL EYES NOW BACK ON JUVENTUS. Yes. Eleven days until training camp begins.