I hope you are enjoying season three of "The Great ‘Toppe Plejersse (Marotta circa 2011 cit.)’ Hunt of Our Lives" as much as yours truly. A little more than a week has passed since the first installment of this year’s Summer Transfer Targets series here at BWRAO and instead of the "toppe plejersse" muddy, messy, confusing situation becoming a bit clearer; the question marks have increased exponentially. How suspenseful! Does Conte still see in Cavani the ideal man to spearhead the attack he intends to take on Europe with? Is Robin Van Persie’s going to be Juventus’ new number 10? What in the world could a first team roster already boasting 347 midfielders possibly need the albeit talented Andrea Poli for, and will he be placed on top of a pile of cash and mailed to Tuscany as part of the Stevan Jovetic deal? Or is that Luca Marrone’s future? Will Marrotta’s supposed admiration for Edin Dzeko materialize into a last minute offer once he fails to secure the services of every other rumored top player? Stay tuned to find out!

This and more to be unveiled over the next 36 days, but until then, it’s time to shift our focus to the south of Italy, where Conte’s supposed preferred top player target plays his trade: Edinson Cavani.

Edinson Cavani is 25, a key player for both his club and national side, and the best striker in Serie A. The Uruguay national made the move to Italian football at just 20 years old by joining Palermo for 4.4 million Euros. He made his Serie A debut against Fiorentina in 2007 coming on as a sub with Palermo down by one goal, and immediately scored this:

His Sicilian adventure was very much a positive one. Despite a number of factors, both seemingly natural and awfully bizarre playing a role throughout his experience with the Rosanero (fairly young age; often coming on as a substitute; coaching changes; at times used in a wider attacking position than that of the typical prima punta; a certain Amauri having the one good season of his career [this is your one chance to curse Alessio Secco in this post, use it wisely] ), Cavani averaged just under a goal every three games in all competitions (37 goals in 117 total appearances, 34 goals in 109 Serie A appearances).

De Laurentiis’ Napoli was El Matador’s next stop, as he joined the Partenopei in July of 2010 on a season long, 5 million Euro loan deal which included an obligatory, pre-agreed purchase option of 12 million Euros to be paid by Napoli over a period of four years. Upon being made the focal point of the team’s play during the last two years with Napoli, Cavani has had in the eyes of numerous fans and experts alike the most consistent and impressive production by a Serie A forward: 47 total appearances/33 goals in 2010-2011, 48 total appearances/33 goals in 2011-2012.

Although statistics are great to observe, they almost always don’t show the full picture when it comes to a player’s ability and contribution to his team. Cavani is one of the most complete forwards around in today’s game. Despite characterizing himself as a natural prima punta, Cavani’s career has seen him being employed as a seconda punta, as a wide forward, and he has even assumed the duties of a right winger throughout game portions. The physical side of Cavani as a striker is not only excellent, but a devastating aspect to his game, as he combines a tall, lean frame (184cm of height) with a dynamic style of play, a seemingly relentless hard-working motor, good acceleration both on and off the ball to equally impressive pace and agility which have often seen him spearheading Napoli’s counter-attacks, both in Italy and Europe.

His strength and balance, on the other hand, are also very good, as they have allowed him to become a reliable presence not only in attack, but also in transition of play and the defensive phase of the game, often helping by holding off opponents, holding up the ball if necessary, while at times even playing as a play-by-play target man by knocking down headers and playing one-twos. Cavani possesses a decent left for being naturally right-footed, great finishing, good technique, positioning, off the ball movement and anticipation, which have made him one of the smarter forwards in Italy when it comes to putting himself in the position to score, especially short distance goals. He’s good in the air and an excellent set-piece taker, converting an impressive 12 penalties and one free kick in his two seasons at Napoli. Last but not least, Cavani is a workhorse, a fantastic team player, and the quiet, hard-working, solid professional type any team would love to have. 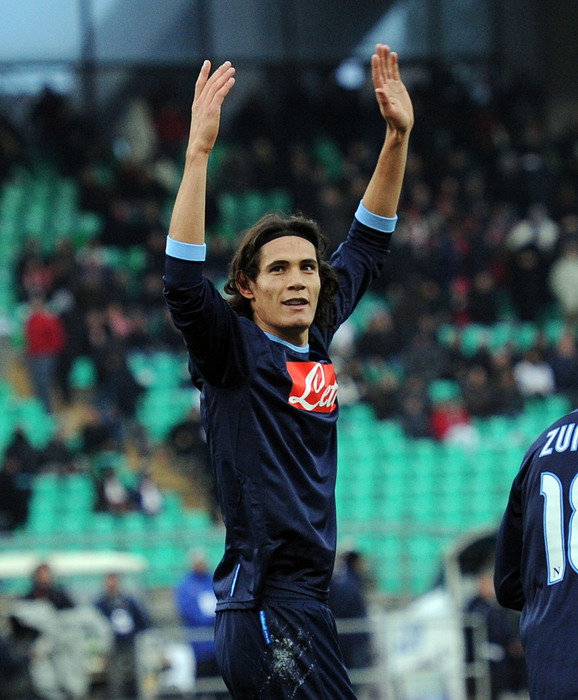 There had been faint, irregular rumors linking Cavani to Juventus as early as his Palermo days. I even remember reading an article sometime in early 2010, I believe, which claimed Cavani was actually a Juventus fan when he was younger. How much truth there was in it is still unclear, but the Juventus-Cavani voices became more insistent throughout the last six months; El Matador is as elite of a young striker playing in Europe not currently earning a fortune as one can be, and Juventus is on the lookout for an offensive upgrade. If the media is to be believed, Edinson Cavani is at the very top of Antonio Conte’s (Christmas?) mercato wish-list which he is hoping (One-Eyed Santa Claus? [sounds like the title of a low-budget horror film starring, among others, an Alexis Texas or two]) Marotta will be able to fulfill.

The Possibility of a Move:

Everything about Cavani’s case is ideal. At 25 years old, Cavani is very young and most likely has a few years to go before he reaches his footballing peak. His grandfather’s Maranello origins, his Italian passport, and the four and a half years he has spent playing in Serie A make him a much safer bet than most of the other strikers Juventus has been linked with by the media – there is always a greater degree of comfort when looking to buy from within the league. Cavani’s goalscoring record in Italy speaks for itself, although only 25, the Uruguayan already has 83 Serie A goals to his name, and his 12 goals in 20 European continental competition games record (5 goals in 8 games in last season’s Champions League edition alone) highlight the level of Cavani’s goalscoring abilities: he can comfortably score anytime, anywhere. Although different players, much like Robin Van Persie, Cavani’s well-rounded offensive game would make him an ideal toy for Antonio Conte’s ever developing tactics. His current net salary of 2.2 million Euros/year on his Napoli contract expiring in 2016 also makes his case favorable, if Cavani were to become a new Juventus player, even if his salary is doubled by Marotta, the gross expenditure El Matador’s wages would comprise on Juventus’ payroll would still be in the single digits, something which can’t be said for most of the other “toppe plejersse” candidates.

But he’s not going to be a Juventus player, and as strange as I feel saying this, there’s now greater chances of Robin Van Persie signing for Juventus than there are of us seeing Cavani start alongside Vucinic and or Giovinco anytime soon. Make no mistake about it, by next summer, Edinson Cavani will no longer be a Napoli player. This is not an arrogant Juventino talking, as I’m not sure Cavani will end up a Bianconero but I firmly believe he will be the next departing member of what were deemed by Napoli fans as “The Three Tenors” (Lavezzi-Cavani-Hamsik trio). 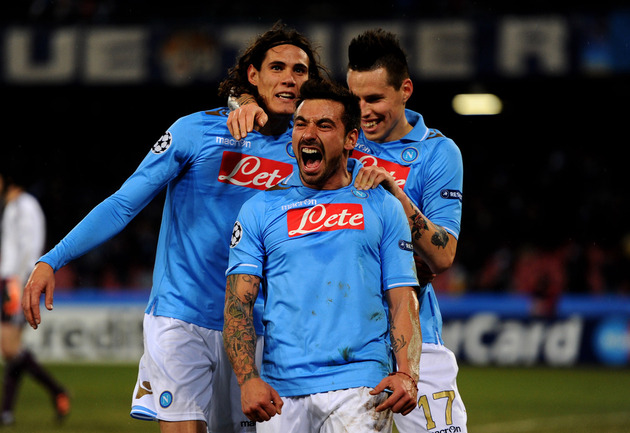 The primary reason why Cavani will not be Juventus’ top striker goes by the first name of Aurelio, last name De Laurentiis. De Laurentiis has no desire to sell Cavani, and according to his latest, public, circus act of an interview published two days ago: “would sell him only if someone crazy enough presented themselves with 100 million for him”. This is DeLa being DeLa, as there is no doubt in my mind if someone wealthy enough presented themselves with 40 million cash for him (no part player exchanges, co-ownerships or loans and as long as it’s not in the last few weeks of the summer transfer season), Napoli’s president would pay for El Matador’s plane ticket, too. 40 million cash, in Italy, for one reason or another, nobody is currently capable of offering. This unfortunately goes for Juventus, as well, and nearly all of the rumored Juventus offers to Napoli that have been described (read: made up) by journalists include a sum of anywhere from 15 to 30 million Euros + pick up to two of Matri/Giovinco/Melo/Krasic/Pazienza. De Laurentiis is not stupid, and is well aware that if he were to lose both Lavezzi and Cavani in a matter of weeks, his team would lose tremendously and would be in trouble for European qualification next season. Napoli’s fanbase would also not take a possible 1-2 punch of that sort well, at all, especially if their best and beloved player wears the fiercely disliked Juventus jersey next year. 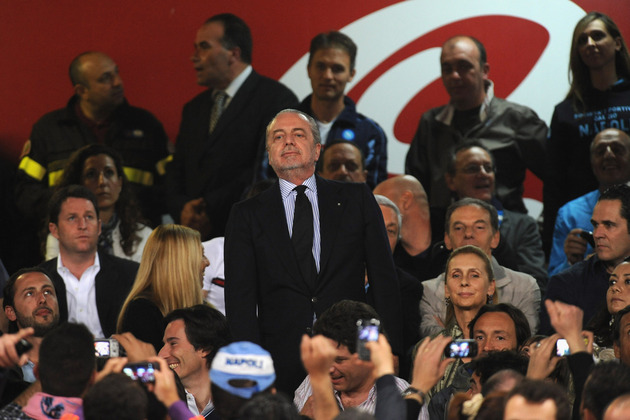 The period of mercato we have entered in, also makes a possible Cavani move highly unlikely. With just over a month left to complete deals, prices are generally higher and clubs are less inclined to sell with time to identify possible substitutes to re-invest transfer money upon running out. Although I’m not a huge Lavezzi fan, I’ll acknowledge his contribution to Napoli’s play and success the last few years, and I’m curious to see how Napoli and Cavani himself cope without him in the upcoming season. Insigne is very talented, but whether he’ll be able to make fans forget Lavezzi is yet to be seen. Strikers like Cavani are not easy to substitute when they leave your team, even if your name is Roberto BelliCapelli Mancini and you play Football Manager for a living.

Other than that, Cavani’s case is as ideal as can be! 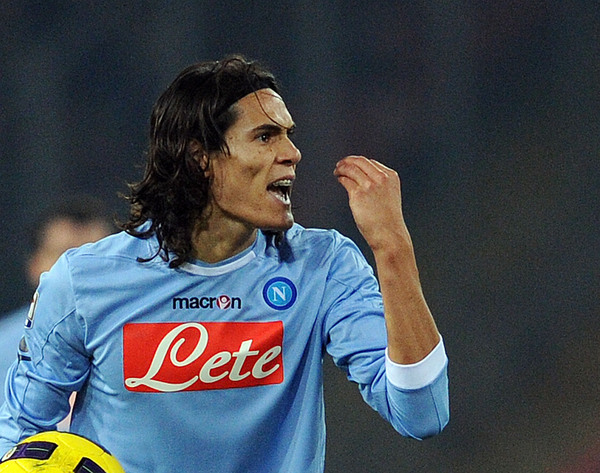 Skeletor shall remain eeevil, you witless fools! In all seriousness, not only are Cavani’s chances of a Juventus switch awfully slim, the chances of a switch, at all, appear awfully slim, at least until next summer. The absolute only way I could see Cavani departing this summer is if Napoli are faced with a 50+ million Euro, late August Chelsea offer. It’s a shame, as not only is he a wonderful player, but as I have already mentioned, his case would suit Juventus’ needs and preferences well, however, I’m afraid we’ll have to continue to face El Matador as an opponent even in 2012-2013.