After the match against Aygreville, Juventus played their 2nd/3rd friendly matches in the traditional TIM Cup. After 90 minutes of football, Inter walked away with the trophy, however the bianconeri looked the better team of the three present. After the break, a review focusing on the "new" players.

With a team largely made up of new and primavera players, and after days of arduous training at Chatillon, Juventus took on one of Italy's most prestigious clubs — and Inter. Two 45 minute matches (after only a few days of training) are never going to tell the whole story of how good or bad a club is; however, these matches showed that Juventus are still hungry, that the acquisitions made will help the team cement their place in Italy and Europe, and that our attack needs more work.

Let's tackle these points Chiellini style (After I am done, you won't know what happened to you):

- We are still hungry. After winning the Scudetto and making it to the final of the Copa Italia, some players become complacent. Not at Juventus. The bianconeri were the most proactive team of the three. Add to that the fact that Inter are further ahead in their training and this says lots. Juve players brought the fight to Inter and Milan, yes, they tired as the game progressed, but they never seemed unlikely to score a goal, or create an opportunity. If you think that the more likely players to be content are not there (i.e. the players that took part in the Eurocup), think again. If Marchisio, Buffon, and Pirlo are not at the top of their game, other players will take their spot. This of course shouldn't be unexpected, after all, we all know who coaches this team... 'nuff said.

- Good transfer market acquisitions: With the exception of Lucio who was unlucky on that bounce (he has to smarten up, it is not like he is Del Piero's firstborn, the tifosi won't have much patience with him) the new additions looked good. I was particularly impressed by Masi and Kwadwo. Also, the decision of Conte to keep Marrone under his wing is looking better and better every day. We haven't seen Isla or Giovinco yet, but I have no doubt that with them, the team will be stronger and will be a force to be reckoned with in Italy and Europe.

- We need a better attack: The bad part of last weekend's game was the attack. Just like last year, Juve created, and created, and created, but NO ONE COULD FINISH. Matri seems to be stuck in a rut. It can't be easy when every newspaper in Italy says you are going to be sold because the coach doesn't approve of you. A little bit of confidence from Conte can go a long way in helping Matri regain his form. Why should we care about his form? Because until one of RvP, Cavani, Messi, Destro, or Maradona are signed, he is the best we have, end of story. What about Quags? His positioning was poor. Vucinic on the other hand, looked like the only one who knew what was going on.

Leali 6.0 Just like Storari, he didn't have much work, however he had a beautiful save from a Robinho shot. He may be one for the future, but at the moment he needs to play regularly. A few Serie B clubs have expressed interest. 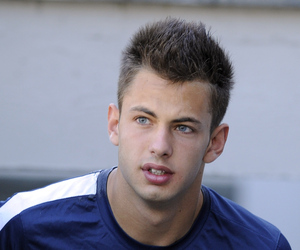 Lucio 5.5 Yeah the pitch sucked, but this is his second mistake of the season. In addition, he will be the most scrutinized player this year. If he wants the fans' approval, he needs to start doing better. It doesn't matter if Juventus plays in the beautiful Juve stadium or on the dirt field nearby my place.

Masi 6.5 Given his age and experience, I really liked what I saw from him. He resembles Bonucci with the ball at his feet, something Conte clearly appreciates. With that being said, what impressed me the most was his ability to anticipate the opposition. During the Inter match, there was a play where Milito looked to have acres of space as he was getting ready to receive a pass from one of his teammates. I was wondering who was going to cover the Argentinian, as Masi didn't seem too interested, and Lucio was moving to cover the guy with the ball. A second before the pass was made, Masi casually found his way to Milito, and manhandled him the way Juventus defenders have been doing since the invention of calcio elegantly took the ball away from him.

Ziegler 6.0 Not bad, but also not spectacular (not that anyone was today). I wouldn't mind if he stayed to fight with De Ceglie for a starting spot.

Asamoah 6.5 If he wanted to impress Conte, I am sure he did. Recovers, passes, blocks, and makes a nuisance of himself, what is not to love? When Vidal and/or Claudio are not in form, their place will be in jeopardy, they better watch out. 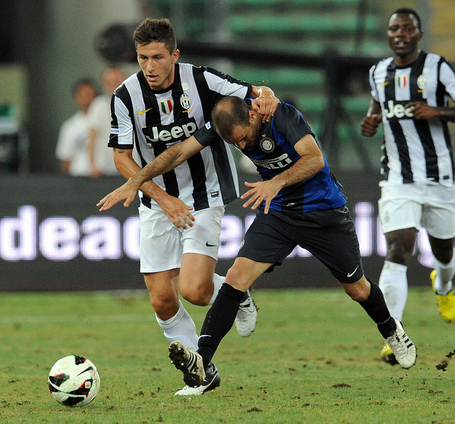 Marrone 7.0 He was the player that impressed me the most. He controlled the tempo of the game, and was always there when his teammates needed him. If the Tim cup is an indication of things to come, then Conte plans to use Marrone as a vice Pirlo. They are clearly not similar players, but Marrone is as close as it gets to Pirlo at the moment. Also, since Marrone does not require as much protection as Andrea, Vidal and Marchisio can venture forward with more frequency. Luca Marrone will not singlehandedly win us next year's Serie A and Champions League, but he can be extremely valuable against smaller teams while also allowing Pirlo to sit it out once in a while.

Boakye 6.0 Looked better in the Aygreville game than yesterday. He has a lot to learn to play in a team like Juventus. I would like to see him move to a Serie A or Serie B team and get more experience.

- The pitch sucked. Jorid said it perfectly: Why do we bother with these tournaments if they are going to injure players? If Caceres doesn't return by next January we would have payed 8m to have him play 11 official matches in one year. Did no one bother to check the pitch? The club should appoint someone to check the pitch a few days before any friendly. The club should cancel any friendly that happens on a farmer's field (no offense to farmers intended). It is just not worth it.

- If Caceres' injury is indeed long term (we will know more tomorrow), Juventus need to buy another CB or promote a primavera player... or bring Masi full time. What do you think? (poll at the end of the post). If Masi continues to show similar performances, I think he is worth keeping.

- Jovetic is a great player, and also think about all the Juvetic headlines Tuttosport (and I) will print (post) throughout the season, but is he the player we need? I am going with no. We need a player that can convert the chances we create. I think Dzeko would be a great option if he is willing to reduce his salary. If not, let's go for Destro if it is not too late, he can't be any worse than any of our players at the moment.

- With Caceres and Pepe injured, I now understand the Isla transfer. Conclusion: Beppe's eye can see the future.

- Can you imagine what this team will look like when Buffon, Barzagli, Chiellini, Pirlo, Giaccherini, Marchisio, and Giovinco return? No wonder why Ibra and Silva moved to PSG. 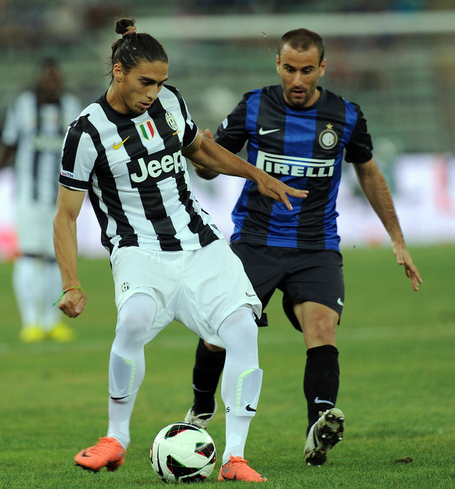 Juventus showed the haven't lost and ounce of motivation. With the new acquisitions wanting to get playing time, everyone is going to try hard to impress the coach during training, and during the minutes they get on the pitch. If the TIM cup is our starting spot for the season, the future looks bright.