Share All sharing options for: ItalJuve 2-1 Bayermany: The Dream Continues

The similarities between Juventus and Italy in the Serie A and Eurocup continue, after getting a few draws and still collecting the points necessary to stay in the competition, the forward, midfield, and defense department are coming together to become a force to be reckoned with. Arguably not the most individually technical side has made it to the final on account of their ability to play as a team, grind out results, and tactical discipline that is second to none. At this point, let's just hope that it finishes for Italy as well as it ended for Juventus. Comments and review after the break.

Germany were the clear favorites to win this game, why shouldn't they? They cruised through the qualifiers, their team was based on Bayern Munich (finalists of the Champions League) plus Ozil and Khedira, they have destroyed every team they have faced. However, Italy's tactical organization, combined with some great technical ability from defenders, midfielders and forwards put the Germans on a plane to... well ... Germany.

The Juve block were essential in this triumph. Barzagli, Bonucci, and Chiellini did not give Ozil, Gomez and Podolski any room to do anything. As a matter of fact, does anyone remember Podolski being there? This however is not to say that the Germans were not dangerous. Although the first five minutes were pretty evenly matched, from then until Balotelli's goal it was almost all Germany.

Then PIrlo turned on the magic, he moved away from Kroos, and found Chiellini wide on the left with acres of space. Chiellini and Cassano dragged Boateng and Hummels (who had a great tournament until this match) into a very small space, and with a genius move, Cassano turned them both at once, crossing towards Balotelli to make it 1 - 0. In short, clinical. From then on, Germany saw lots of the ball but couldn't figure out how to break Italy's newfound organization. A few minutes later Montolivo found Balotelli for goal number two.

Italy dominated the rest of the match without taking many risks until that penalty in the dying minutes that caused a lot of suffering. Had Italy won without drama, it wouldn't have been Italy. Italy are not favourites for the final, but the underdog tag seems to suit them fine. I doubt Prandelli will be doing anything but piling on the pressure on the Spaniards until Sunday. Bring on Spain. 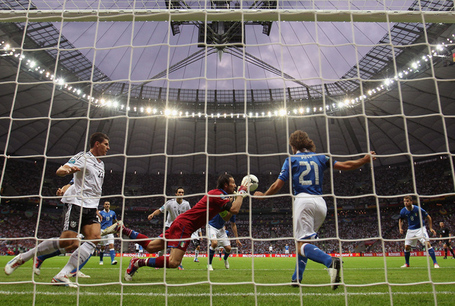 Buffon: 7.5 - Besides the penalty (which can't be attributed to him), Buffon stopped everything there was to stop, he organized his defense and was calm and collected when the team needed reassurance. In addition, making the younger players realize how risky it was to give that penalty in the dying minutes shows his leadership (more on this later).

Barzagli: 7.0 - There is not much to write that hasn't been said yet. Calm, precise, solid.

Bonucci 7.0 To be doing what he does, at his age, and after being trashed in every Italian newspaper for a whole year is nothing short of impressive. All stars have a beginning, they have a point to which they can look and say, it was then that I came of age. I think if Bonucci continues at this rate he will become a great defender, and he will look back at the 2011-2012 season as the time he came of age.

Chiellini: 6.5 - Yes, he was involved in the first goal, but he also got burned a few times by Ozil. Being a fullback is not his strength and it showed. However, nothing bad came from this mistakes. 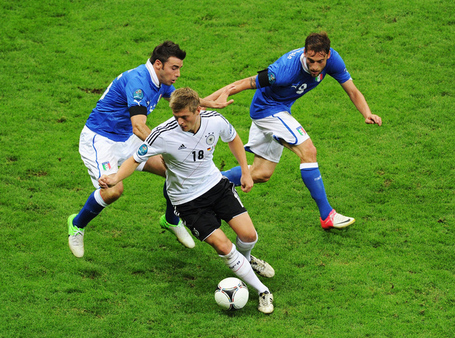 Marchisio: 7.0 - After the game, il Principino said he couldn't see well because he was so tired by the end of the match. Any player that gives that much effort has my respect. Claudio did the dirty work quietly but effectively. After this tournament some may forget about Marchisio, however, it would be hard to argue that Italy would have made it to the final without the little prince turned king.

1) Juventus players brought technical quality, tactical awareness, grinta, among other things. One of those other things has been enviable leadership. Bonucci walking towards Balotelli and covering his mouth in the Ireland match. Marchisio walking to Balotelli after his second goal against Germany to ensure things remain under control. And lastly, Buffon walking off and letting the world know that although winning is good, risking a match in the way Italy did is unacceptable. Ladies and gentlemen, that is Juventus. 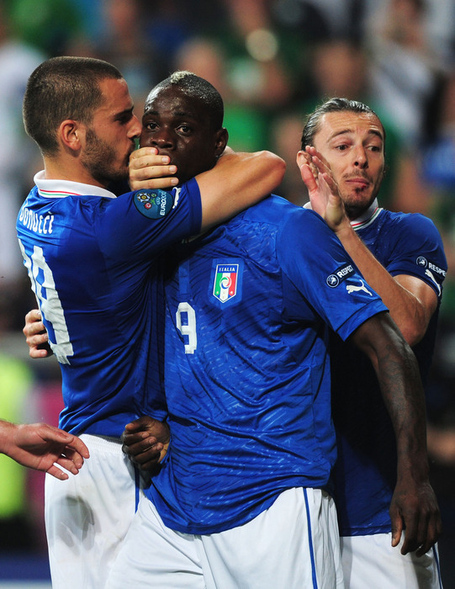 2) There was an argument earlier about how much Conte (and Juventus by extension) has contributed to this Italian milestone. Although Prandelli has been a great tactician, and should receive credit for what he has accomplished, he needed players to win matches. The Juventus players that makeup a large portion of the team have learned a great deal from Conte, both on having a winning mentality, but also tactically. The hunger, and grinta that Juve players bring to the table is just a continuation of what we have seen since last August. Anyone that thinks that Conte deserves no credit for the qualification to the final is welcome to explain to me why is Ranocchia watching the games on TV, while Bonucci is playing them?

Who would've thought Italy would be playing the final? I for one did not. If we keep playing the way we have so far, the sky is the limit. This is not to say that Spain will be easy, but it is not an impossible task either. If the team plays like it did against Germany this can be a magical year for all Juventus players and their azzurri fans.