ItalJuve Plays Out Another Draw, This Time Against Croatia

Share All sharing options for: ItalJuve Plays Out Another Draw, This Time Against Croatia

I am excited, my first game recap. Yesterday, I sat down, pen and paper in hand to watch Juventus Italy take on Croatia. My lovely wife seated by my side watching the game, could life get any better? Maybe if Italy won, but by now you should all know that if Italy doesn't make it through, you won't see me crying, our black and white boys will get a little bit more rest before the next season starts, nothing wrong with that. On the other hand, if Italy make it from the group stages, I will be happy for Marchisio, Bonucci, Buffon, Chiellini, Giaccherini, Barzagli. Pirlo, and half as happy for Giovinco (until he pledges his love to Juve that is all he gets from me). Enough about where I stand on this, let's talk about the game.

Prandelli did not change anything from the Spain game, why should he?, after all, we tied against the champions of Europe and the champions of the world. I will tell you why Prandelli should have changed a few things!! BECAUSE WE COULD HAVE BEATEN THE CHAMPIONS OF EUROPE AND THE WORLD, THAT IS WHY. So, 3-5-2, De Rossi as a makeshift CB, Giaccherini and Maggio flanking the MPM midfield (it doesn't have the same ring as MVP) and Cassano and Balotelli leading the attack.

It took 2 minutes for Italy to get their first chance and it was almost all Juventus, Giaccherini to Marchisio, Marchisio to Chiellini, and then Chiellini to Balotelli. Balotelli, proceeded to turn around and shoot a few inches wide of the right post of Pletikosa. So far so good, ItalJuve was going to cruise through this... couldn't be more wrong. Italy continued to dominate but with the minutes going by, Croatia settled more and more. After 20 minutes, Croatia started to give Buffon some work, with a shot from Giaccherini's wing. Things started to really go Italy's way in the last 10 minutes of the first half. First, Marchisio had two attempts saved by Pletikosa in the 36th minute. Then, after 38 minutes of football, Italy had a goal. A genius free kick from Pirlo which would have made Del Piero proud. After the goal, nobody did anything of note for the remaining of the first half. 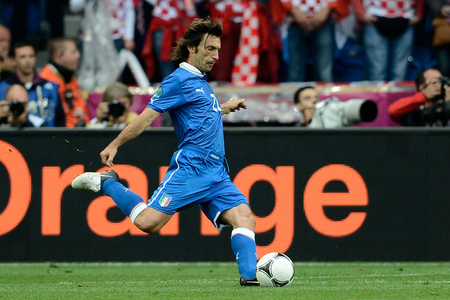 The first substitution for Italy came after 62 minutes: Thiago Motta came off for Riccardo Montolivo. I have nothing against Montolivo but this was a bad substitution. Italy were leading by only one goal, Croatia were slowly playing their way into the match, so what does Prandelli do? He brings in a player who is not a strong tackler and who has scored 4 goals last year. Why?, really, why? When you have Nocerino, a good tackler with a strong shot who happens to be in the form of his life you bring him in. As a matter of fact, you start him.

Then came the goal, Chiellini mistimed his jump and Mandzukic didn't miss in front of Buffon. I won't sit here and say that the goal was not Chiellini's fault but I think that there is more to it. During the first game, Chiellini and Bonucci covered De Rossi's mistakes time and again, and in my opinion, the Juve CBs made the Roma player look better than he actually was. I don't think Chiellini trusts De Rossi at the back, this causes him to make little mistakes as he is trying to figure out his positioning. This is not unlike last year, when Chiellini and Bonucci made mistakes because they were covering for our non-existent fullbacks. De Rossi was not dysmal, but there is a lack of trust, and that is enough to make our defense shaky. If Barzagli plays against Ireland, this would help the confidence issue while also strengthening the midfield. Motta, and Montolivo have done little to deserve a starting spot, and Prandelli clearly doesn't think Nocerino is up for it. If Prandelli has some sense, Barzagli will push De Rossi to midfield, pushing Motta to the bench... the result: a better midfield. 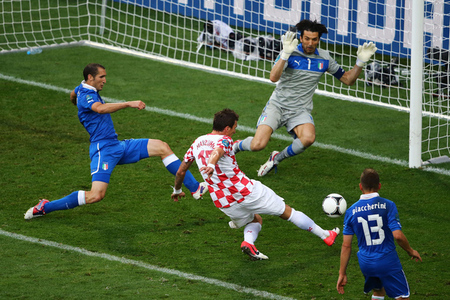 After the goal, there isn't anything else to say. Italy tried, but Croatia were solid and could have hit Juve on the counter attack. Now, Italy's qualification is not in their hands. I think all the talk about a conspiracy to take Italy out of the tournament is downright ridiculous. These suggestions only serve to give extra ink to the journalists that cover Calciopoli, Scommessopoli and any other scandal in Italy. I believe that an Italy win will secure a spot on the next round and may be what the team needs to get them deep into the tournament. On the other hand, failure to qualify will be their own doing and should be a learning experience for all concerned.

Buffon 7.0 Nothing to do in the goal. Besides that, he was solid and a leader at the back. He organized his defense well, came out when he had to, stayed back when he had to. I am sure he is missing Barzagli.

Bonucci 7.0 Solid display. He had a couple interceptions, and a few good tackles. Helped Maggio take on many threats that came from the right. 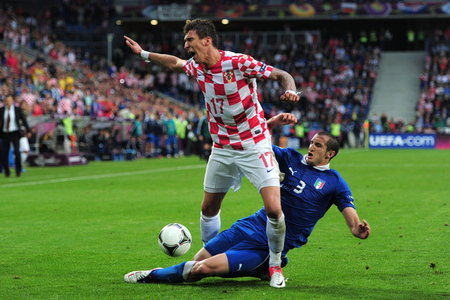 Chiellini 6.0 Harsh, maybe, but the goal was his fault. Maybe he moved to cover De Rossi, or maybe he simply made a mistake. Regardless, he cost the team 2 points. Besides that incident, he had a solid game (the best of all defenders).

Pirlo 8.0 Could he be any better? Apparently he can. Pirlo is having a great year, displaying his talent domestically and internationally. That free kick was amazing, but in general his distribution and passing were just out of this world. Faded a bit in the second half.

Marchisio 7.5 Marchisio played great against Spain but he was really one of the best performers against Croatia. It is unfortunate that Italy are not doing any better because otherwise Marchisio would be receiving much deserved praise. He ran the whole field, tackled who came to his zone, and even put himself in goal scoring positions. Had he scored a goal he would have had an 8 or 8.5, too bad it didn't happen. 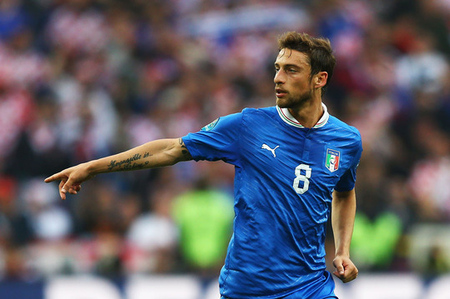 Giaccherini 6.0 He tried hard all game, but he is not playing where he can be most effective. Even though Srna and Rakitic didn't try to take on Giaccherini all game, the times they tried they succeeded. I really don't blame him for his poor performance as I believe it has more to do with tactics than with his ability. Tactics are Prandelli's department, and I think some of the blame should go to the coach.

Italy are no strangers to drama. True to their tradition, they will have to wait until the last game to see whether they make it through or not. Against Croatia they didn't play bad but they did not play as good as they could. Just like Juventus, Italy doesn't have the most technically gifted players in the world; and just like Juve, the way to win is to fight for every ball as if their life depends on it. Italy did not do that, and the result was disappointing yet deserved. Now, they have to get their act together against Ireland which won't be a simple task. If Prandelli learns from the games against Spain and Croatia, Italy will make it through, if he insists with his tactics and personnel, Juve players can start booking their summer holidays. I for one, can recommend a couple nice spots to visit. 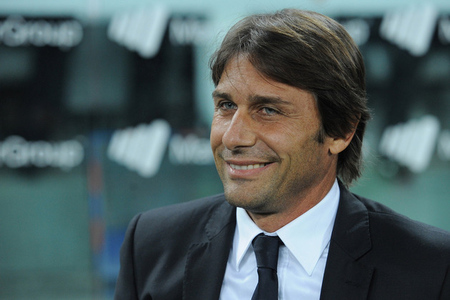 If all else fails, Juve players get to come back to this, what's not to like about that?