To Keep or Not to Keep Marcelo Estigarribia?

Share All sharing options for: To Keep or Not to Keep Marcelo Estigarribia?

Champions League spot, check... consistency, check... solid defense, check...,30th Scudetto, check, grinta... check, check. It is clear that Conte has done a terrific job of rebuilding Juventus, this job of course, was made possible by a well organized management working behind him. In the next few weeks,, Conte and the management will have to make some important mercato choices. During these series, I will look at some of the players that Juventus can keep or let go this summer, and see if it is in Juventus' best interest to keep or not to keep them.

Marcelo Estigarribia (24, born the same day as me, just a few years after) came from Newell's Old Boys (Argentina) on loan for a fee of around 500,000 Euros and an option to buy for 5m euros. During last year's Copa America he made a very good impression. During that tournament, in a game against Ecuador, he was certainly the star, providing assists, dribbles and defending. His performances during that tournament were enough to make the Juventus management sign him in August of 2011.

Since then, Estigarribia has had a total of 13 appearances (8 as a starter) scoring one goal and one assist (if you can call this an assist). He has been deployed as a left winger and more recently as a left wingback in Conte's well known 3-5-2. From Conte's interviews it is clear that the coach believes Estigarribia provides a more offensive option than Paolo De Ceglie on the flank. Esti is generally deployed against small sides where he can attack at will without having to support the defense constantly. 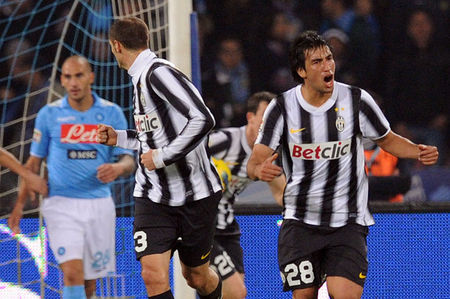 Has he done enough to merit staying with us? I would say yes. If we look at the players that have come to us from other leagues, Esti has done fine for his first year in Serie A. Arguably, from the players that came to Juve from other leagues, only Vidal has done a better job of acclimatizing to Juventus than the Paraguayan. Also, comparing some of his numbers to those of other players suggests he enjoys the faith of the coach. Estigarribia has started 6 games less than Paolino, and as many games as Quagliarella. He has also started more times than Giaccherini, Krasic, and of course Elijero Elia. More importantly, unlike Krasic or Elia who played only at the beginning of the season, Estigarribia continues to be called up and is commonly seen on the bench. Stating appearances are less common but not rare, the latest one being against Palermo only a few weeks ago. With that being said, recently he has been used less frequently as Paolo De Ceglie has become a more complete player both offensively and defensively.

In addition, next year Juventus will be playing another competition and depth in our bench is a must. Estigarribia is not the player to give us the Champions League next year, however he is also unlikely to become useless over the summer. Unlike last year, this summer Juventus will not change coaches and the value of a player that knows Conte's system can't be underestimated. Throughout this year, the Paraguayan has demonstrated qualities that Conte appreciates such as his consistency, obedience to the coach, and sacrifice. Moreover, he will not demand a starting spot (hear that Giovinco?). In a 3-5-2, Estigarribia can easily replace De Ceglie if the Italian was used midweek in the Champions League. And in time of an injury crisis he can play the left back role if Chiellini and Caceres are unavailable. Also, if Conte decides to try a 4-4-2 in Europe, Estigarribia will do well as a left winger (his natural position) overlapping with De Ceglie.

Estigarribia however is not the Paraguayan equivalent of Gareth Bale. He is not a difference maker and he is incredibly poor in front of goal. Although the same can be said about our strikers this season, Estigarribia's statistics are truly poor even in leagues that are not as defensive as the Serie A. The Paraguayan has only scored 7 goals since he began his professional career in 2005. I don't know about you, but when I see Esti get the ball in the 18 yard area something in me tells me he is more likely to send it flying wide than to make the keeper work for it. Can Conte make him more clinical in front of goal? Maybe with time and experience, however it is naive to expect him to do extraordinary things in the near future.

Is 5m euros a fair price for him? Well, if you consider we paid 12m for Martinez then buying Estigarribia should be a no-brainer. However, it is not that simple. 5m may seem like a small sum of money but it can be enough to tip the balance when trying to sign a world class player somewhere else on the pitch. Also, his poor scoring ability will be a point Marotta will likely raise when negotiating with Newell's Old Boys. However, if we don't sign him, we need to go back into the market and lure a player who can do better than the Paraguayan and cost around 5m. Suggestions? Don't say Gareth Bale or Tello, Marotta will have to give-up his first born to get those players to Turin. In addition, buying from another league has its own risks. In my opinion Marotta can negotiate the price down to 4m or even 3m and add 2m or 3m in bonuses based on appearances, goals, etc.. 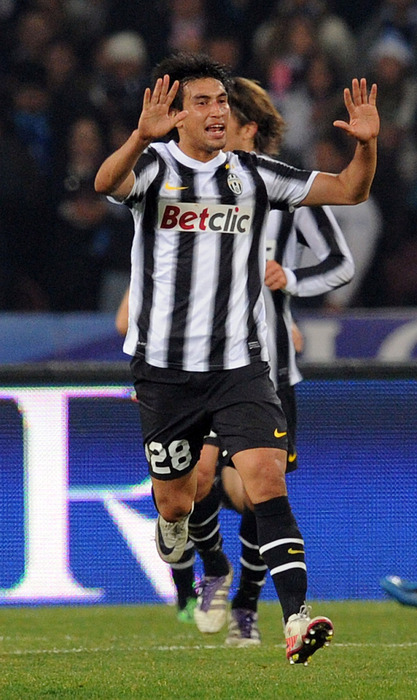 His first and only goal with Juventus came against Napoli when Juventus were loosing 3-1 in the second half. Never give-up?... I think so

However, if Newell's is unwilling to settle for less than 5m I still think Juventus should make the transfer permanent. Having a player that knows the coach and the system can be valuable, and a full year in Serie A and at Juventus is simply priceless. In addition, Estigarribia has shown promising signs in the Copa America and during training. It was not long ago that Buffon was reportedly saying that he was impressed by the things that Estigarribia does at Vinovo.

Marotta is very close to decision time regarding a number of players. Marcelo Estigarribia can provide a useful alternative for the Champions League bound Juventus. Purchasing the Paraguayan can be one headache less for our sporting director who will probably be getting ready for the most important transfer market he has ever had in his hands. If Conte says he is satisfied with the Paraguayan, there shouldn't be a shred of doubt in bringing a promising player to our beloved club.