Share All sharing options for: Juventus 1:1 Lecce - S*it happens, On To The Next One!

If there is one lesson I've learned in this short life of mine, it's this: SHIT HAPPENS. Sometimes, it happens to the best of them. Like our very own Gigi Buffon for example. The man who stuck with Juventus through thick and thin, a Bianconeri legend, a player who has been an inspiration and an example to all.

This is not an article on Buffon's greatness, however, as that is as indisputable as the fact that Alessandro Del Piero should not be leaving Juve this summer. This is a short recap of the events that took place at John Charles Arena earlier this week. Let's hit it.

With three games to go in the season and top of the league with a 3 point lead, Juventus took on a Lecce side that had the tiniest of chances to stay in Serie A next season. Yet the unimaginable happened - Lecce took 2 points away from our Bianconeri to narrow the gap to 1 point at the top of the table for Milan and make for a heart-attack-inducing last two games of the season.

The game should have been over in the first 25 minutes. As it's becoming a bit of a custom (finally!), Juventus opened the score early with Marchisio's 8th minute header from a beautiful Pirlo pass over Lecce's defense. About 20 mins later, Vidal had the perfect opportunity to seal the deal with a left footed shot that went just wide. Make that the first of two. 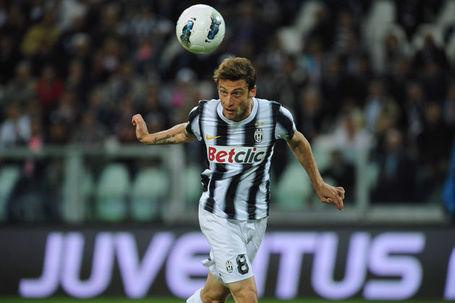 Juventus looked comfortable throughout most of the first half, but that turned out to be the actual problem - we may have been too comfortable. In the meantime, Lecce fought for every ball and in the second half started dominating more of the possession. Despite having Serie A's most spoiled player sent off 10 minutes into the second half, Lecce made life very difficult for our Bianconeri who looked further away from scoring a second goal.

Then, an utterly shocking sequence followed. Gigi Buffon, bored out of his mind for the last 10 games, scuffed a back pass by Barzagli with a bad first touch. Bertolacci rushed to beat Gigi's following challenge and scored from 2 meters out on an empty net. You could literally hear a pin drop in the stadium - everyone was in complete shock.

Juventus tried to score another goal in the last 7-8 minutes to no avail. What was even more painful to watch was Buffon apologizing to the whole stadium after the match as fear started sinking into fans' hearts that the title that many had already attributed to Juve may just be lost in the dying days of the season. 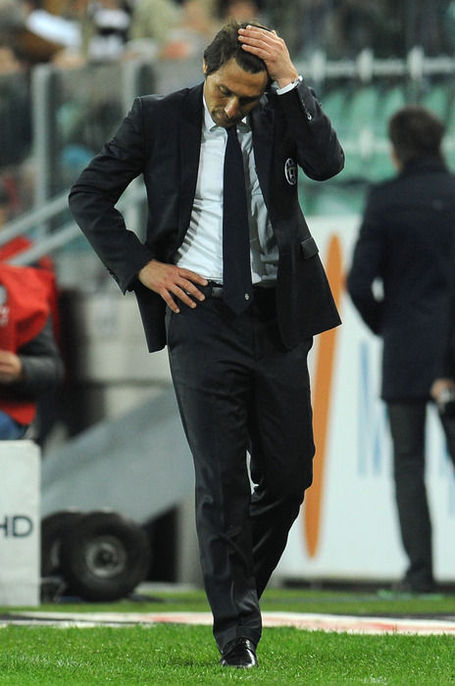 Buffon: 5 - Cost us the game in all honesty, but I don't have the heart to blame him for what happened. When I was a kid, my dad would always give me a hard time if I played keeper as even the smallest mistakes are fatal since you're the last man. Gigi is a champion, he's given his life to our club, and has absolutely nothing to apologize for. Hell, if Bonucci apologized after every goal-costing mistake his shoulder would be dislocated!

Bonucci: 6 - He's had a few decent game lately, but against Lecce he looked like he was back to his bad habits. Can't get cocky now!

Chiellini: 6.5 - Wasn't as physically dominant as he wanted to, but still a good overall game.

Lichtsteiner: 6 - Average game from 'Steiner, though none were surprised. He is a true right defender and can do very little offensively. I bet he misses the 4 man defense from earlier in the season dearly.

Pirlo: 7.5 - Another great performance from il Professore, the only consistent player throughout the match. He was dead tired at the end, but his assist to Marchisio was a beaut.

Marchisio: 7 - Man of match in my opinion, had a great first half reminiscent of his earlier performances this season.

Vidal: 6 - The X Factor in this game that unfortunately went Lecce's way. He had 2 fantastic opportunities to score but his left foot was not up for the task on both occasions. Too bad, as he's been key for us lately and could've continued that trend. Get em next time champ!

De Ceglie: sv - Just when he was getting in form, another hamstring injury hampers his season.

Vucinic: 6 - He got us used to the brilliant Mirko version and then left that version at home for this game. Could've done a lot more, but his passes and shots weren't connecting well.

Quagliarella: 5.5 - He recently signed a one-year contract extension to be a backup next season, so I guess Conte felt bad for him and gave him a start. He wants a goal, but can't make one happen. Had a sweet curling shot go wide that could've been the winning goal. Just not in form right now.

Caceres: 6.5 - Brought so much energy on the left flank, it was instantly evident. I don't think De Ceglie or Lichsteiner can ever bring that kind of boost in a 3-5-2. Unfortunately, his half-decent left foot proved to be too inconsistent to create anything on the left. He has to start on the right though!

Conte: 6 - What is Conte thinking starting Buffon when he has Storari and Manninger on the bench?!! I kid, I kid. He couldn't have predicted the goal, though I wish he would play Caceres on the right. I just know he will get this team so fired up for Sunday night that Cagliari won't know what hit em. Right guyz? ON TO THE NEXT ONE!