Juventus 2011-12 Season In Review: The Goalkeepers

Share All sharing options for: Juventus 2011-12 Season In Review: The Goalkeepers

As many of you remember, the reason why I started rooting for this lovely club that wears Black and White is because of the man who mans their goal, Gianluigi Buffon. A goalkeeper drawn to Juventus because of its then-young, soon-to-be-legendary goalkeeper — not exactly rocket science and probably somewhat predictable.

That's why seeing San Gigi struggle like he did the past couple of seasons was so tough for me. We all knew what he was capable of, but the performances were anything close to what we've seen the past.

But that's also why seeing Buffon back to his old world-class self in this Scudetto-winning season was so rewarding. 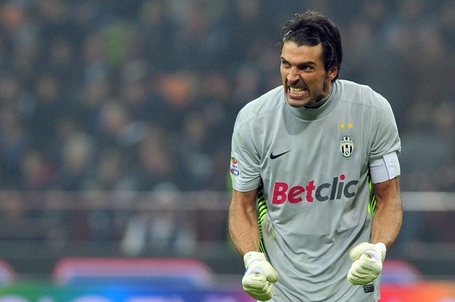 In a season that had many great performers, Juve's No. 1 was one of the best. And not just one of the best, but also one of the most consistent. His season may have ended with little to do because of what his teammates were doing on the field, but let's not be mistake — this was a vintage kind of season for San Gigi.

Finally healthy again, Buffon recaptured the form he had before the string of injuries following the 2010 World Cup held him down. There were acrobatic saves that saved games and maintained the undefeated run. There were Man of the Match performances — yes, some players had games better than Pirlo — that reminded everybody that he still has plenty left in the tank.

Then there are the actual statistics he put together — some beautiful, beautiful numbers. His 21 shutouts were the most in Serie A. His league-leading 0.46 (ZERO POINT FOUR SIX, PEOPLE.) goals against average was downright absurd. Taking it a step further: Buffon played 3,150 minutes and allowed 16 goals.

Want some more stats? Of course you do.

Buffon's 82 percent save percentage, as noted by Who Scored, was the highest of any goalkeeper playing in one of Europe's five major leagues. For a player who only faced 96 shots on goal all season, that's a pretty staggering number when you consider how little San Gigi had to do at times — especially in the last couple months of the Scudetto-winning campaign where it seemed like most of the time he was just standing around kicking dirt.

So, is your mind blown? It should be.

This was the Buffon we're all used to. And this is the Buffon that Juve needed to win a Scudetto.

That happened — and No. 30 is where it belongs. 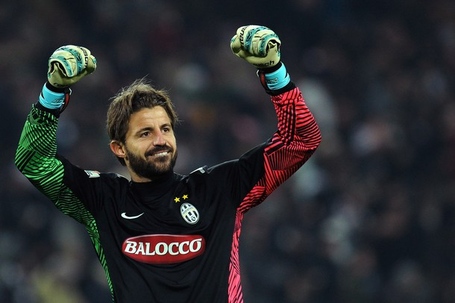 While Gigi Buffon is routinely called Superman, I like to think of a another superhero combination when it comes to Buffon and Storari: Batman and Robin.

Marco has truly become the perfect understudy for San Gigi. Obviously Buffon didn't miss the amount of time due to injury this year as he did last season, but whenever he did, Storari was available and didn't really miss a beat.

And that's the most challenging thing about being a backup keeper; you don't know when you might be called into action. Obviously, Storari was the man who started in the Coppa Italia games, but other than that, he was just on standby, waiting for his name to be called.

The 35-year-old Storari managed to get into only eight games this season — five in the Coppa, three in Serie A. His total goals against average, 1.28, isn't anything to write home about, but relying just on numbers to evaluate Storari's season isn't exactly fair to him. The sample size is so small when it comes to games played this season, that with a couple games of two goals conceded, things get a little whacky.

Marco Storari: a goalkeeper a lot of teams wish they had wearing their jersey.