Napoli 2-0 Juventus: The Wrong Night To Barely Show Up

Share All sharing options for: Napoli 2-0 Juventus: The Wrong Night To Barely Show Up

As we saw over the course of the nine months of this astonishing campaign, Juventus pretty much deserved every result they got. If they played like they deserved a draw, it usually happened. If they deserved to win, then three points were usually captured. Ultimately, a much-deserved Scudetto was hoisted above everybody's head last weekend at the Juventus Stadium.

Different week, different outcome. In the Coppa Italia final, Juventus deserved to lose — and they did.

There's no ifs, ands, or buts about it. Juve came out sluggish, continued to play sluggish, and never really found their feet against a Napoli side that was pretty impressive at times until after they were down 1-0.

Juve had chances to score, but couldn't break the goose egg. It didn't help that the match referee, Brighi, channeled his inner Bergonzi, was the fourth official. Still, that doesn't excuse Juve from really playing a pretty meh-tastic game overall. Napoli deserved to win the Coppa. They were the better team on the night.

But I'm not going to dwell on this loss all too much. Because — like our old buddy John pointed out on Twitter towards the end of the game — if you were to chose one, would you rather have the Schdetto or the Coppa? Not saying this loss wasn't a frustrating or disappointing one, but I think we all know the answer to that question.

Storari: 6 - People will point to the penalty call as to why Marco had a bad game. Sure, it proved to be a game-changing mistake, but when saying he played poorly, you need to remember when he made a huge save within the first two minutes of the game. The team was all out of sorts at that point and Storari came up huge.

Barzagli: 6.5 - Pretty much your typical kind of #WallOfBarzagli match. Andrea's lone mistake was letting Lavezzi blow right by him before going crashing into Storari.

Bonucci: 6 - Other than being caught in no mans land as Lavezzi went streaking by right before the penalty, not too much to fault Leo for. Made some of his typical runs forward from the back and was pretty sound in defense.

Caceres: 6 - El Pelado started shaky, but then got in the swing of things. Made a couple of huge tackles on the wings to stop a Napoli attack. Caceres really showed his versatility, having rarely played a central-ish role since he moved back to Juve.

Lichtsteiner: 5 - Easily one of his worst games of the season. His poor run of form the last couple of months was only that much more magnified tonight. Lichtsteiner struggled out on the wing, and never got things going.

Vidal: 5 - This was Arturo's first mediocre game in a long time. Conte revealed in the post-match interviews that King Arturo wasn't completely fit — and it showed. For a guy who relies so much on running all over the freaking place, Vidal looked absolutely sluggish. You could tell that after a long season his battery was close to empty, injury or no injury.

Pirlo: 5.5 - If Who Scored kept stats of Coppa Italia games, I'd be interested to see what Andrea's passing numbers were like. For a man who has dazzled us with genius pass after genius pass this season, it just seemed like he was a step off today. The balls that he usually launches over the top of defenses were going long a lot of the time and some of the turnovers he made were very uncharacteristic.

Marchisio: 5.5 - Much like his other two compatriots in the center of the midfield, this was a pretty poor showing from Claudio. Was totally robbed of a penalty when he was hacked down in the box by Aronica — as shown below — in the first half and had a shot clang off the right post, but that's about it. Il Principino started out pretty invincible and only marginally got better as the game went on. 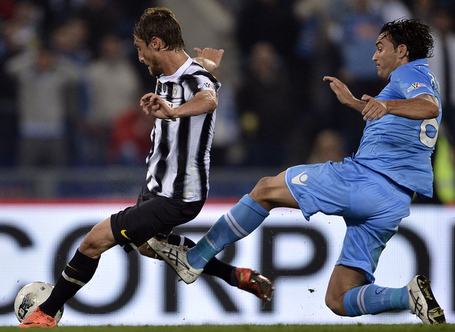 Estigarribia: 6 - Many wondered — including myself — why Conte went with Esti instead of somebody like Pepe, mostly because of Maggio's potential to attack up and down the right flank. Much to his credit, the young Paraguayan did a very good job of controlling the impact Maggio had on the match. He also got forward a few times, but most of his work was done keeping on the defensive side of things.

Borriello: 4.5 - If you wanted to point to a game to show the Juve management why they shouldn't make Marco's loan deal permanent, this very well may be the one. His impact was minimal at best. You can tell Conte wants to play with a strong and physical kind of prima punta, but Borriello really shouldn't be that guy.

But in all seriousness, this was such a frustrating game to have as Del Piero's last bow. From Borriello as his strike partner to the overall quality of the team's performance, you just wish this game had some of the magic last weekend's did. The next game Juventus will play won't have Alessandro Del Piero on the callup sheet, and it won't be because of an injury. That's a pretty weird sentence to write and an even harder thing to imagine.

Pepe: 6 - Typical kind of Pepe sub appearance. Made some runs towards goal, including one impressive one that almost got himself on the scoresheet.

Vucinic: 5 - Heard his name maybe twice at most after he came on. Sums up his season — when he's good he's good, when he's bad he's pretty much invisible.

Quagliarella: s/v - You never want to have a player shown a straight red, but his elbow to Aronica definitely brought a smile to a lot of Juventini's face considering what had gone down earlier in the game. 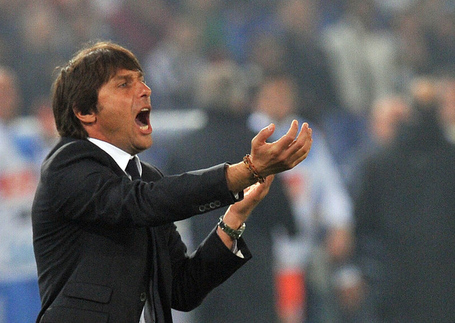 Conte: 5.5 - I won't beat starting Borriello to death, because I'm pretty sure I'd just repeat myself and I know we'd all agree on what I'd type anyways. But the issue I have is this: Why did it take so long to replace Borriello? Conte's subs have made some of us scratch our heads a few times this season, and this was one of them.

But kinda like I said earlier, one game — trophy at stake or not — isn't going to change my opinion of Conte in what has been a truly remarkable season. Grazie, Mister.