I realize there is one, very important game left in the season. That Coppa Italia final could be the ultimate game that caps a season for the record books in the history of sports. On the other hand, it could put a damp on a fantastic run by our Bianconeri heroes this year. Either way, I wanted to quickly address some transfer rumors going on in the press. Call me premature, I don't care. Many women before you have. (Self-bazinga!)

Actually, to be perfectly honest, I still haven't even watched the Atalanta game. I don't know, I just couldn't. I've seen clips of Del Piero's goal, videos of the celebration and post-party/parade. I even thought I had the heart to see that 15 minute long Del Piero tribute after which I sprinkled 17 fresh cut onions around my place to cover up the downpour.

Within the next few weeks, I'll sit down and pour my heart out on what Alessandro Del Piero means to me on here for your torture pleasure. In the meantime, let's take a look at who is supposed to replace him, or at least who is supposed to be our main striker next season, according to the current media. I believe that such a person does not currently wear bianconero and am super excited by the possibilities that lie ahead.

I looooove Van Persie. I just do. He's always been underrated, well up until this season at least. He is probably one of the most injury prone quality attackers out there (though Pato surely takes that prize), but this season he was healthy and bagged in goals like no other. He claimed this year's top scorer title in the Premier League with 30 goals, and almost passed Alan Shearer's record for most goals in a calendar year (scoring 35 to Shearer's 36). Not only that, but he singlehandedly carried Arsenal in many Premier League game, and was a pure leader on and off the field. He hits very accurately with both feet, has a great feel for making a run or diving for the ball, and his volleys are true fireballs. Plus, he's a God at Arsenal right now.

So why would he want out? My belief is that he doesn't. I claim he's using any kind of "outside interest" to re-negotiate higher wages on his new Arsenal contract. At the moment, Van Persie is Arsenal. What Berkamp then Vieira then Henry then Fabregas were to the recently-massively unfortunate London club, that is what Van Persie means to the Gunners at the moment. Arsene Wenger must know that replacing a striker like him will be a nightmare. If anything, he MUST finally learn his lesson to pay up instead of lose out. Can you imagine losing Van Persie to Man City, for example?

If Van Persie were to leave Arsenal, I don't see him playing for Juventus at all. He's 30 years old, his main goal is to win the PL or Champions League, and he'd be taking a big risk signing for Juventus at this stage of his career. Plus, knowing Marotta, he'd have to take a paycut. As much as the press likes linking him with Juve at the moment, my call is that it's just not happening.

Up until a few years ago, my opinion of Cavani was the same as the one of Amauri - he's a strong striker with little technique and a great feel for headers. Being South American with long, flowing hair didn't help either. Plus, they both were fighting for a place in Palermo before Secco splashed the cash on Amauri and Cavani got the starting spot alongside Miccoli down south. 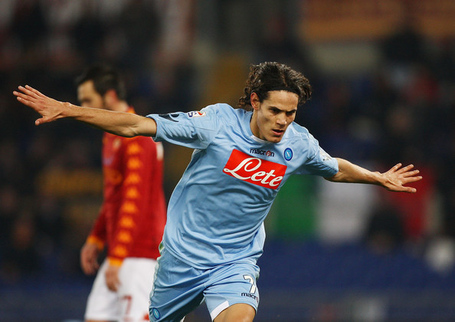 The trajectories of those two careers couldn't have gone any different though. Amauri is now a bust playing for a struggling Fiorentina side after infamously becoming one of the most hated figures at Juventus ever, while El Matador has been notching capocannoniere titles, leading an energetic Neapolitan squad to the late rounds of the Champions League. You know what they say - hindsight is 20/20.

Let me also tell you something you already know - Cavani is the perfect Juventus signing this summer. He has tons of Serie A experience, his skills transfer to the different Champions League climate where he can be just as effective, he's motivated, determined, and a non-nonsense striker, and most of all he seems to be a humble guy who is more concerned with scoring and winning than any off-field fame or scandal.

Most importantly, however, Conte and Marotta seem to share this sentiment. I am convinced that they will do everything in their power to bring Cavani to the Del Piero Arena over the summer, but it may not be enough. After all, Napoli won't part with the striker for nothing. It's almost certain they'll ask for a good amount of cash, even if we try to send Krasic, Elia, and Matri their way. (Btw, I'd do that swap immediately. Krasic and Elia will never play for Conte, yet they are both fast wingers who would work really well at Napoli. Matri could be that lurker who comes in off the bench and re-juvenates the Neapolitans. Maybe Napoli can throw in another bench-warmer just to make the deal look more even.)

If Van Persie was to be excited to play in Torino, I can really see him making a difference for us in the Champions League in a way that Cavani cannot. When Van Persie takes over games, he's pretty much unstoppable. Cavani isn't there yet (though I'm not sure if technically he ever will be). On the other hand, Cavani seems like the perfect fit for the atmosphere at Vinovo. He speaks Italian, knows the domestic game, and has some experience in the Champions League.

The thing is, Conte will get the best out of anyone that arrives at Juventus. It's terribly exciting to think of the potential Cavani has under Conte with Pirlo, Marchisio, and Vidal behind him. It doesn't sound as melodic, but wouldn't you want to hear the "Quando gioca segna sempre Cavani" cheer at Curva Sud again?