Juventus 3-1 Atalanta: The Perfect Ending To An Undefeated Season

Share All sharing options for: Juventus 3-1 Atalanta: The Perfect Ending To An Undefeated Season

With Juventus wrapping up the Scudetto last weekend in Trieste, you'd think the season finale would be a simple phone-it-in, play-all-the-scrubs kind of game, right? Ya know, basically one of those games you play just to see out the end of the season where not much at stake.

Juventus' final game of the 2011-12 campaign wasn't even close to that. Ah, the beauty of the Old Lady.

Sure, there was a different lineup than we have been accustomed to seeing throughout the season, but there were a couple of storylines that were a bit more than just "minor" heading into Sunday's finale at the Juventus Stadium. The unbeaten season, for one. Alessandro Del Piero's swansong at Juventus Stadium.

Whatever it was, this far more than your average final game of the season.

There were a lot of things that would've made Juve's season-ending win a special one — both because it secured only the third undefeated season in Serie A history and the farewell to our beloved Capitano. But, without a doubt, I can say with the utmost of confidence that Del Piero scoring what would eventually be the game-winning goal would be at the top of that list.

Records were broken. Goals were scored. Del Piero stuck out his tongue after a goal for possibly the last time in a Juve jersey (even though it was an ugly pink one). Juventus celebrated what has been an absolutely magical season for 90 minutes and beyond. Just another memorable day in a season filled with them. 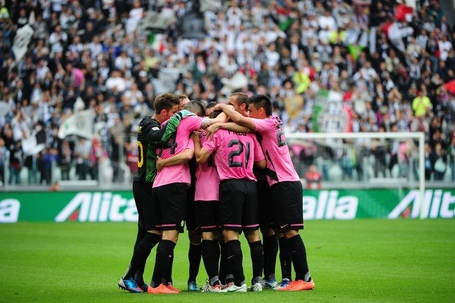 Storari: 6.5 - The world's best backup keeper was just as solid as he usually is. He made one huge save in each half, commanded his area very well. Storari couldn't do a damn thing on the own goal, which would've been Juve's 12th clean sheet in the second half of the season. Simply astonishing.

Lichtsteiner: 6 - With Atalanta doing most of its attacking down the opposite flank, the Swiss tank didn't exactly have his busiest day at the office. It's kinda fitting that he scores the first goal of the season and last (own) goal of the year as well, isn't it? (Although I'm sure he wouldn't have wanted to score the second!)

Bonucci: 6.5 - Pretty much the same kind of solid, near mistake-free performance we've seen from Leo. Assured at the back with only one real moment of uncertainty when Denis skinned and then skied a clear chance at goal.

Chiellini: 6.5 - Much like Bonucci, Chiello put in his usual efficient shift until he tweaked a thigh muscle in the second half, He won't play in the Coppa final, obviously, but hopefully this doesn't carry over to Euro 2012. The way he has been playing this season has proved how crucial he is for club and country.

Estigarribia: 5.5 - A rare start as a full-fledged left back didn't go as well as the man he replaced, Paolo De Ceglie, was playing, but it wasn't a complete disaster either. Had a bit of trouble with Schelotto's trickery, but had no other problems at the back.

Padoin: 6- It's the kind of game you'd expect from somebody like him. Didn't do anything spectacular, didn't screw anything up. Put in his shift and that's about it. Not a bad player to have in your squad with Juve about to play on three fronts next season.

Pirlo: 6 - Didn't replicate the kind of And here's something that'll surprise you: of the three Juventus midfielders, Pirlo had the most tackles with five. See what happens when Arturo Vidal doesn't play?!

Marrone: 7 - Not a bad goal from a kid who has barely played this season, huh? Netted his first Serie A goal with a wonder one-time strike. Also showed glimpses during the course of the game as to why many — including yours truly — think so highly of him. His post-goal celebration was also pretty darn awesome to see. 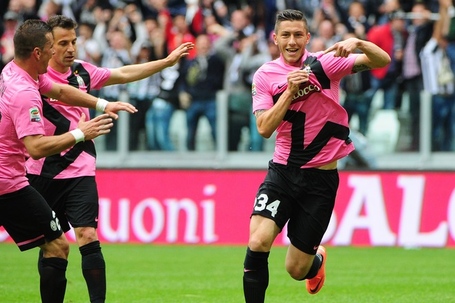 Giaccherini: 6 - Not a great offensive display from little Giacchomole, but did get the assist on Del Piero's goal. Did some running, made a few tackles, solid outing.

Borriello: 6.5 - To be honest with you, I had no idea Borriello had that kind of assist in him. It's not that I hate him or anything (even though I don't want him to stay at Juve), but you don't expect a big lug of a striker to fire off a cheeky back heel to a teammate like it's no big deal.

Del Piero: 7 - After 19 years with Juventus, the man still has that sixth sense to rise to the occasion when the spotlight's shining bright on him. Every time he touched the ball, the crowd roared. They knew what they were witnessing. And how does ADP repay them? With a goal — a beautiful goal at that. His substitution 13 minutes into the second half might have not made some people happy, but it gave the tifosi plenty of time to show their love to Il Capitano.

I mean, how many players can be allowed to take their lap of honor DURING the game? Not many. And I can guarantee not many eyes were focused on the game taking place. As the great Derek Rae said on my ESPN3 stream, "Juventus Stadium has turned into King Alessandro's courtyard." Truer words have never been spoken.

"To be able to score, win and receive that kind of response from all the Bianconeri fans was wonderful. It was a superb and historic day. I’ve had plenty of thrilling moments, but the emotions I felt yesterday have yet to fully sink in. It was magnificent and I’d like to thank everyone who was there."

Pepe: 5.5 - Didn't have much of an impact after he came on for Del Piero in the second half.

Quagliarella: 6 - Came on for the last 25 minutes, won a penalty, celebrated a Scudetto. Not a bad day.

Barzagli: s/v - Wouldn't have played if not for Chiellini having to be taken off early. The 20th and final Juventus player to score a goal this season, another new Serie A record. Not a bad strike, too, huh. 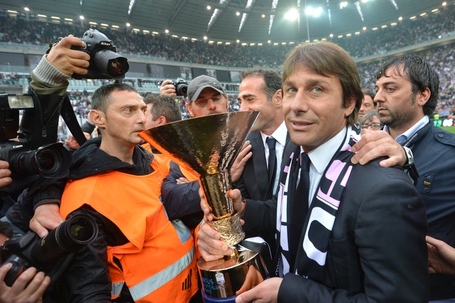 Conte: 6.5 - With everything that has happened in the past seven days, you would understand if Juve came out a little flat and sluggish. Nah, not with Conte in charge. He made changes to the lineup, but his players were prepared and got the job done, a credit to him and the kind of manager he really is. One thing I love is what Conte said in the post-game interviews: He wasn't pleased that Juve gave up the own goal, despite his team setting a Serie A record for least goals conceded in a season.

And when it was all said and done, this happened....