Juventus 3:0 Napoli - A Clinic on How to Thrash One Rival and Put Pressure on Another

Share All sharing options for: Juventus 3:0 Napoli - A Clinic on How to Thrash One Rival and Put Pressure on Another

During a couple weeks where every following game seemed like the biggest game of the season for our Bianconeri, they truly delivered on every account culminating with a convincing 3:0 victory over fourth-placed Napoli.

Playing on Sunday night in front of a fantastic crowd at Stade de Platini (yeah, I went there), both teams knew the results of the teams before them in the table and with a win could creep closer or overtake them at the end of the 30th round in Serie A. Milan had dropped points after a tie in Catania which gave Juventus a big chance to get back in the Scudetto race, while Napoli was a win away from the third spot after Lazio's loss to Parma earlier in the weekend.

Coming off an extra time draw to qualify for the Coppa Italia as well as a stylish 2:0 victory over rivals Inter the week before, Juventus clearly had the momentum. Mazzari's men on the other hand, were looking to bounce back from a disappointing draw against Catania in the previous round and a recent defensive lapse, conceding 7 goals in the last 3 games.

As it's become a custom now for derby games against opponents who play with 3 defenders, Conte lined up with his own rendition of a 3-5-2 with Barzagli, Bonucci, and Chiellini at the back. Lichtsteiner was back from his suspension on the right flank, and in a somewhat inexplicable move, Borriello joined Vucinic up front to form a former Roma partnership. More on that decision later.

Juventus started the game in control and created the first big chance on 4 minutes. A great outlet pass by Vidal put Pirlo in a position to put a dangerous cross in front of Napoli's goal. The ball swung in perfectly across the 5-meter box but Borriello missed a clean header from 2 yards out to give Juventus the lead. In a very Amauri-like fashion, he got up and immediately complained to the ref for his failure. Deja-fuckin-vu.

For the majority of the first half, Napoli was unable to test the Juventus defense. Their dangerous trio in attack (Hamsik, Lavezzi, Cavani) couldn't find a good balance against the Juventus backline. Hamsik was stuck in an attacking midfielder role trying to cover Pirlo, while Cavani and Lavezzi were very spread out trying to create gaps in Juventus 3-man defense in case of a counter attack. Here's a quick screenshot of that example: 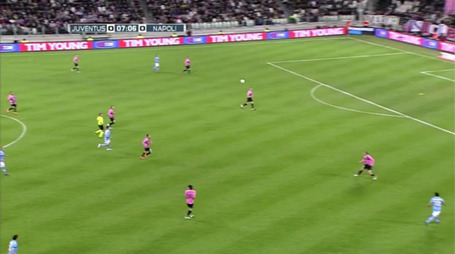 Meanwhile, Juventus' dynamic duo in midfield, Vidal and Marchisio, put a lot of pressure on Napoli's midfield both in offense and defense, preventing them from quickly going on a break where the Neapolitans are the most dangerous.

After a fruitless first half, Juventus needed a bit of luck to break the game open. A Pirlo set piece ricochet to Vucinic who put a shot on goal only to hit Bonucci/Cannavaro and end up in the back of the net. Bonucci celebrated as if the goal was his, but after review the goal has been assigned to Mirko Vucinic, making that his 6th in Serie A this season and 7th overall (and boy do we remember that 7th).

The opening goal made this a very different game. Juventus felt even more encouraged while Napoli opened up in an attempt to equalize the score. My fellow countryman Pandev was introduced (I don't get to say that too often) to further bolster Napoli's attack, who were now playing a quasi 3-3-4 formation.

Despite these efforts, Juventus were the team to score the next goal. All tribute goes to the spectacular King Arturo who took advantage of a one-on-one opportunity on the left flank, dizzied his defender with a series of moves, and hit an incredible shot in the back of the net to put the game away for good. Substitutes Del Piero and Quagliarella then combined for the third and final blow of the game. 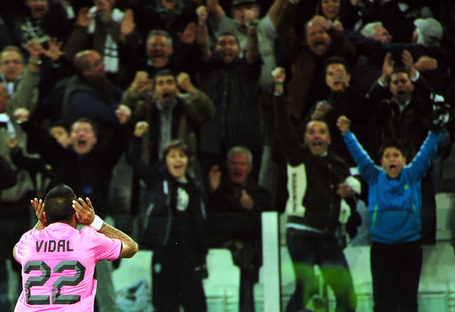 Buffon: 6 - Must have been surprisingly bored out of his mind as Napoli had no shots on goal the whole game. The only instance where he was needed was in the first half when he scared Hamsik from taking a shot inside the area.

Barzagli: 6.5 - The old chap showed some serious pace early on in a couple races with Cavani and held his own marking el Matador. Despite a positive performance, he was outshone by the other two center backs who had great games.

Bonucci: 7.5 - If it wasn't for Vidal's amazing performance, he would've been my man of match. Barely put a wrong foot all game, despite playing in a 3 man defense which has historically been troublesome for him. I was very impressed with Leo, even though he will likely be on the bench next weekend I do hope he continues this fine form when he's back on the field again.

Chiellini: 7 - Yet another great performance from Kaiser Giorgio. He didn't even act out his usual theatrics when Zuniga was sent off for an elbow in his face. Kept whomever came his way under lock and was completely solid all 90 minutes. 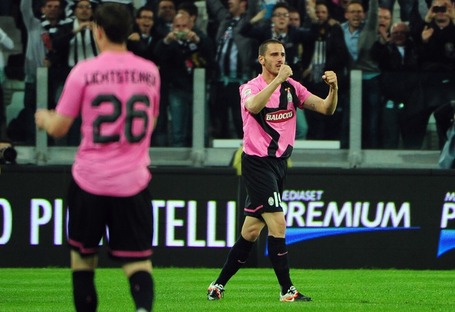 Lichtsteiner: 6 - Was somewhat conservative on the night, the only notable cross coming early on to Borriello who shockingly missed it wide. Other than that, ran a lot and was eventually subbed in for Caceres after getting a yellow card and almost getting sent off for simulating a foul.

Pirlo: 6.5 - Did very well to keep the ball moving and helped a lot of his teammates get in the game. Didn't have any spectacular moves either, but I did think he had a silently good performance. Kept Hamsik from attacking to much though struggled against Pandev's "pace" in the second half.

Marchisio: 6.5 - Worked a lot on Sunday. He wasn't quite as effective as Vidal, but without him Vidal and Pirlo would have a much tougher time being their best, which was evident during the "drawitis" we suffered from a few weeks ago.

Vidal: 8 - Buffon robbed him of a man of match title against Inter, but this time around there was no one to take that away as Vidal put in a true clinic of a performance. In defense, he was always helping out, diving into tackles and recovering the ball. In offense, he pushed often and hard, creating an extra man in the final third for Juventus and confusing the Napoli backline with his presence. He also scored a fantastic goal down the left which sealed the game for Juve. In these last few games he has really come into his own and is the player everything was hoping he would be. KING ARTURO!

De Ceglie: 6.5 - Paolino did fairly well playing as a wing-back, though there wasn't much that stood out. He mostly continued his solid form from recent games, and has even grown in confidence to take a few shots from the left! That was new! Either way, all the power to ya De Ceglie, keep it up!

Vucinic: 6 - Seems like the rule with Mirko is: many games of mediocrity, one game of brilliance. He did technically score but that was quite a shitshow of a goal. Also, other than that, he didn't do much else. I really hope he doesn't start for us next season.

Borriello: 5.5 - I tweeted this on our @JuveOffside (soon to be JuveNation) account recently and he definitely confirmed it with his performance against Napoli - Borriello is now our new Amauri. What took so long to get rid of has now instantly been replaced with another excuse for a striker. Good news is, we can say bye bye to him in the summer. Right, Marotta? RIGHT?

Del Piero: 7.5 - With two touches for Quaglia's goal he produced and contributed more than all of Borriello's touches this season combined. Then he himself created 3-4 chances for a goal that he all nearly converted. In my lifetime, I haven't enjoyed watching any other player more than our Capitano. It saddens me to come to terms that this is his last season in a Juve jersey, as it seems that Agnelli, Marotta, and Del Piero have all made that decision final. And to think that I will never be able to claim that I've watched the maestro play live. He needs to start all 9 remaining games for Juventus, Scudetto and Coppa Italia challenges aside. COME TE NESSUNO MAI!

Caceres: 6.5 - Granted the game was a lot more open when he came in, he did immediately look more threatening and energetic than Lichtsteiner. He is making Conte's job really hard with his performances, though it's a good headache to have. Hope to see him start against Palermo!

Quagliarella: - HE'S BACK! With the first touch of the game he controlled Del Piero's pass, with his second he blasted it in De Sanctis' net. In a classy move, he didn't even celebrate against his old club, despite the obvious look of relief and exultation on his face after the goal. Welcome back Quaglia!

Conte: 7 - He got the formation right, he kept everyone motivated and committed, and he got the subs right. The only thing he failed at was starting Borriello. I completely understand the decision to try something different than Matri given his recent lack of goals, but Borriello was the wrong choice. Del Piero would've been the best choice, and even Quagliarella would've been a lot better than Marco. We keep waiting on him to realize this, why hasn't he? 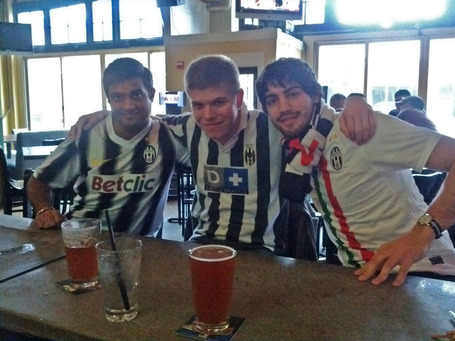 I know what you're thinking: Who the hell are these three sexy Juve-jersey-sporting beasts? Welp, that would be Saurabh, Luke, and your favorite Macedonian! Before the Napoli game, I reached out to a couple of our fans and commenters here on the blog that I knew lived in Seattle and we got together for the game at a bar downtown. Big thanks to Saurabh and Luke for coming out for a few beers, it was quite the pleasure watching and analysing the game with them on a Sunday morning. If there are some other Juve fans in the Seattle area that would like to join us next time, do let me know!

For all you Juventini elsewhere, I encourage you to get together with fellow Black, White and Read All Over fans in your area and catch a game every now and then. It's a lot more fun then just yelling at a screen by yourself at home while your cat is in the other room scared shitless thinking you've gone bipolar. I have to admit though, I did miss reading your generally hilarious comments on the game thread.