The dream continues! 33 games played in Serie A, 19 wins, 14 draws, 0 defeats, top of the table, and now with a fresh 3-point lead over nearby-rivals Milan. Not only that, but what was just a gritty, hard-working team at the beginning of the season has now become a ruthless attacking machine that sweeps everything in its way.

There's a term in American sports I've learned to love and appreciate - closing out periods. Whether it is quarters or halves in basketball or periods in hockey, not slipping up at the end of campaigns and not losing focus when you're most tired can prove to be a key component towards being successful. And what is Juventus doing right now, but on a grander scale? Closing out the season in style. After a sluggish post-Natale start, they are back to their best physically and mentally, and seem to be reaching new highs creatively. 6 wins in a row against the likes of Roma, Napoli, and Inter is exactly the way to gain momentum at the finish line and truly challenge for the Scudetto. Orgasmo.

The game against Roma was another huge opportunity for Juventus to take a step closer to the Scudetto. With Milan dropping 2 points in their draw at home vs Bologna (remember, Bologna took 2 points from Juve earlier in the season as well), Conte and his men had a chance to go up by 3 points in the table with a win. To the great satisfaction to all Juventini round the world, they took full advantage of the opportunity!

In fact, the game was as good as over after just 9 minutes. The new King of Torino, Arturo Vidal, made sure all could rest easy after scoring from his first two shots of the game. The first one fell to him a bit luckily, as Vucinic put De Ceglie through on the left who crossed the ball low across goal. The pass ricochet slightly off a Roma defender to set up Vidal beautifully in front of goal, who hit the inside of the side-netting with his left foot. 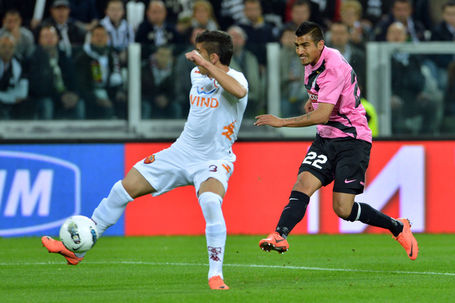 The second, again set up by the Montenegrin, was a very English-like goal. Buffon took a long kick towards Roma's half, Quagliarella denied De Rossi a clearance, Mirko controlled the ball and squared it over to Vidal. This time with his right foot, from another one-timer, King Arturo basically hit the exact same spot of Stekelenburg's net for the early 2-goal lead.

The most controversial moment of the match came in the 26th minute when Stekelenburg fouled Marchisio for Juventus' second (sigh) penalty of the season and a red card for Roma's keeper. While not many have argued the penalty call, it seems that the red card was deemed unnecessary by most. Remember, however, that referees are encouraged to give red cards when the "last man" in attack is fouled and a clear goal-scoring opportunity is denied. My thoughts on the matter? I would have preferred for Marchisio to stay on his feet despite the slight contact with Maarten's outstretched legs. Claudio wasn't going to reach the ball anyways. Not saying it was a flop, but Marchisio could've played on if you ask me. Once Bergonzi blew the whistle though, the red card was inevitable 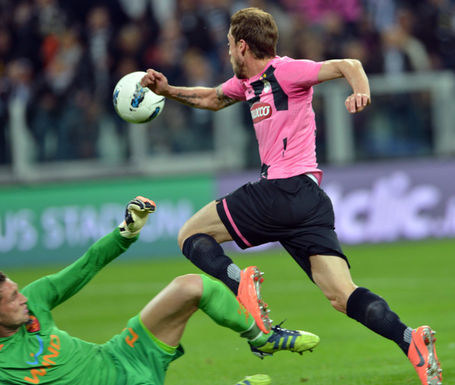 Buffon: 7 - Had only one save to make, and was pretty bored for most of the game. For lack of things to praise him about, he did pretty well starting our attack with passes to the defense vs. clearing the ball far into Roma's half when necessary. One of those kicks brought on Vidal's second goal, too.

Bonucci: 6.5 - Had a couple nice passes over Roma's midfield but made a couple mistakes defensively as well.

Barzagli: 7 - Solid as always. Even got a bit cocky after the game, though with his experience and recent form, I can't blame him.

Chiellini: 7 - I really enjoyed Chiellini's quiet but excellent performance. Too bad he didn't convert on that header after Pirlo's brilliant free-kick into the box.

Lichtsteiner: 6.5 - He's clearly not a threatening player offensively, but I understand Conte's choice of a more conservative right wing back choice given Vidal's recent attacking forays. I thought Forrest had a very decent game, despite being mistreated and spat on! Loved his response to Lamela's pathetic gesture. 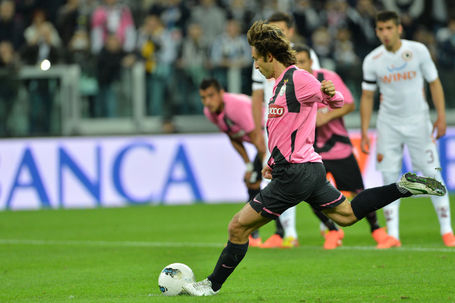 Pirlo: 7.5 - Il Professore was at his usual best on Sunday, leading our midfield and dictating play. Many of you here and on Twitter were asking for him to give up the penalty to Vidal for a hattrick, but I respectfully disagree. Pirlo is main penalty taker right now and it's his responsibility to step up and make them, no matter the situation. Despite missing the actual penalty, he did well to score on the rebound.

Marchisio: 7.5 - Now that Vidal is the scoring star of this second-half of the season, Marchisio has done amazingly well adapting to the midfield situation. He covered the field superbly in midfield and picked his spots when to make a run and when to stay back. Won the penalty and scored a beauty for the 4th goal.

Vidal: 8 - What a gem of a player we have on our hands in Arturo Vidal! Currently in what must be the form of his career, Vidal is playing out of his mind and doing it with style. Did you see that confidence in his demeanor for the first two goals? He looked like he was in a training match. Absolutely brilliant game from the Chilean, definite man of match. Less than a year at the club and he's already a fan favorite and a true Juventus warrior. Pink jersey with his name on the back....ordered.

De Ceglie: 7 - Like Lichtsteiner, found acres of space on the flanks but used it a lot better than the Swiss. Assisted on the first goal and was always in attack providing another option down the left side. Would love to see him close out the season with 5 starts, it should really boost his confidence going into the Euros. 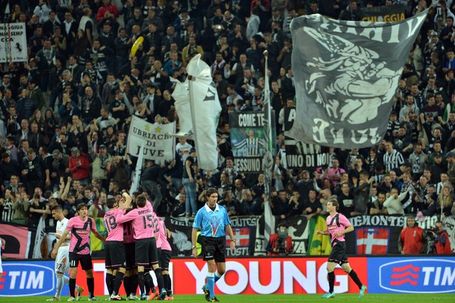 Vucinic: 8 - Big game Mirko stepped up big against his former club and pretty much set up all 4 goals. Got a hockey assist on the first, directly set up the second and fourth, and created Marchisio's chance that led to the penalty. Grande!

Quagliarella: 6.5 - Not his best game, but he did move a lot up front and made Roma's defenders shift their positions. Good team effort overall.

Conte: 8 - Handled this game like a true champion. If we had any doubts of his selection or substitution choices earlier in the season, by now we're mostly nodding our heads to every step he takes. Just try to remember, when was the point in this season when you started thinking - "Damn, Conte's still undefeated, how's this happening? How long is it going to last?" Well, it's still going on, folks. This handsome God of a man is leading our Juventus towards new heights, records, and levels that we haven't been at in a looong time. Can he pull it off? Can he really win the Scudetto in his first season as our coach while undefeated? #InConteWeTrust