You can't make this stuff up. You just can't. Our captain, the biggest symbol of Juventus in recent years, a walking legend, a true gentlemen, and surely one of the best players of all time, caps his 700th appearance in a jersey that by now must be glued to his body like a tattoo, with a trademark free-kick to bring Juventus back to the top of the table and to keep it on course for the Scudetto in what is possibly his last season in bianconero.

The free kick? It was astonishing! It was not just a dream, but a wet dream of orgasmic proportions! A true wonder strike...wait, nevermind. It was quite the beauty of a goal, despite the frantic situation around the wall that some of the Juve players created. Alex struck it beautifully. He knew what he wanted to do and if there was anyone that could pull it off, it was him. Come te nessuno mai! 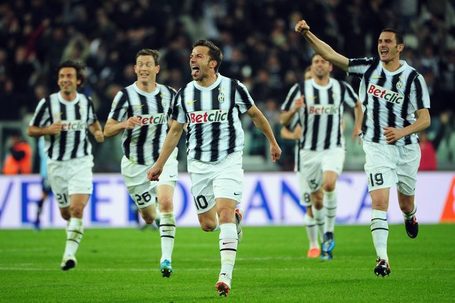 But how did we bring ourselves in the situation to chase a winning goal in the 82nd minute?

None of it had to do with the way we attacked Lazio. In fact, the first 45 minutes of the game were the most convincing attacking play I've seen Juve play all year! The only thing lacking was a second goal in Marchetti's net in the first half, after Pepe opened the score with a beautiful volley.

The Lazio dagger came unexpectedly at the end of the first half when a marking lapse in defense gave Mauri the chance to score a well-placed header beating the outstretched Buffon.

In the second half, Juve pushed for the winner but the true change in dominance came only after Vucinic came off for Alex Del Piero. The rest, as they say, was history.

Buffon: 6.5 - Couldn't do anything for Mauri's goal, and other than that, dealt with a couple other shots quite comfortably. Lazio had only one weak shot on goal in the second half, so he was pretty bored during the last 45 minutes. His run to the Curva Sud to celebrate Del Piero's goal was pretty epic though. Makes me grin, jump, and celebrate just seeing it now.

Lichtsteiner: 6.5 - Conte hadn't picked him to start until a few minutes before the match when he swapped him in for De Ceglie. Steiner did well to cover the right side defensively and only really struggled when he got his yellow against Rocchi on a fast break. Caceres should still be the first choice on that flank though.

Bonucci: 7 - Like the Swiss, he wasn't supposed to play from the start but Conte's last minute change of plans inserted him in the starting line-up. Once again, he looked very confident and comfortable, even pushing up more and taking some shots. Suffered a broken nose at the end of the game which he had surgery on today, and he'll miss the game against Cesena. Expect him to come back next week against Roma with a Batman mask on!

Barzagli: 6 - From what I could see in the replay, he was the one to leave Mauri free for the equalizing goal. Other than that, he didn't really have much to do for most of the game other than regular defense clean up.

Chiellini: 6.5 - Many were quick to point out how much "we missed De Ceglie and his attacking play" at the beginning of the game but I was pretty shocked to see those comments. Chiellini actually had a very good first half in attack, delivering a couple good crosses and overall giving Vucinic an extra man behind him. In the second he was more of the leg-chopper we've come to expect from Giorgio but had a decent game overall. 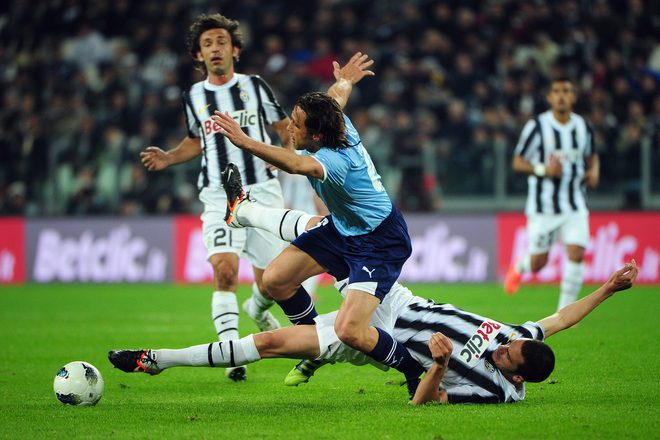 Pirlo: 7.5 - Was given plenty of space again and took full advantage. Had the Lazio defense on its heels with his crisp passing in the first half which culminated with his delicious chip pass to Pepe. Not sure how the whole convo went down between him and ADP for the free kick, but it was a classy move of him to let the legend take us home.

Marchisio: 6.5 - It feels like he is now consciously taking a secondary role to Vidal in attack, and I think that's actually better for the team. Nevertheless, Claudio ran a lot and was often in the right place to fuel on Juve's attack or shoot down a developing Lazio break. A lot of Vidal's success in front of the opposing team's box is only possible because of this man.

Vidal: 7 - Damn Marchetti for not allowing King Arturo to score the goal of the season from 65 meters out! A delightful chip surprised everyone and just when we thought it was going in Marchetti got his hands on it to put it over the crossbar. Despite not scoring, Vidal had some great outlet balls that created real goal-scoring opportunities. He really has come into his own as of late and it's wonderful to watch.

Pepe: 7 - Mamma mia what a goal! A beautiful pass from Pirlo which he chested, turned, and volleyed in like a true forward. It had to have been the goal of his career? Other than the goal, he did miss one big chance right before the volley and then had some typical Pepe crosses - high and long to no one but the opposite corner flag. Still, he put in a great 70 minutes and was very energetic. Pepinho!

1 day ago: TURIN, ITALY - APRIL 11: Simone Pepe of Juventus FC scores the opening goal during the Serie A match between Juventus FC and SS Lazio at Juventus Arena on April 11, 2012 in Turin, Italy. (Photo by Valerio Pennicino/Getty Images)

Vucinic: 6.5 - Began the game at a furious pace for his lazy style and came close to scoring in the first half. Let's just clear the air on that dubious obstruction call - if you ask me, that is NOT a penalty. I've seen refs give those for less in other games, but a little bit of physical play from a defender in his own box should be expected. It was clear that Mirko was going for the penalty too.

Quagliarella: 6.5 - I was thoroughly impressed with Eta Beta in the first 45 minutes. He played the best game a target-man has played all season. His technique is superior to Matri in those situations and he made that very clear on Wednesday. Love that he's been starting as of late, though many of you have been asking for an ADP + Quaglia partnership and I have to say, that sounds amazing right now. Maybe against Cesena? I mean, it's Cesena...

Conte: 7.5 - What this guy has done for Juventus so far this season is truly unbelievable. No one saw it coming, but even after 32 games in Serie A we are undefeated and hungry as ever. He's also prepared our team to such a point that if he so chooses to switch formations 2 minutes before the game, Juve still comes out looking like a superforce. He deserves to finish off this season undefeated with a Scudetto trophy in his arms #InConteWeTrust