Round 32: Keep the Train Rolling

Share All sharing options for: Round 32: Keep the Train Rolling

"Winning has always been fundamental for us and now it is even more important."

Those words from Alessandro Matri after Saturday's win against Palermo couldn't be any truer. You don't need a Master's in physics to figure out what is going on right now. Seven games remain and Juventus enters the 32nd round of games at the top of the table for the first time in quite a few weeks. Every game from here on out is the most important one of the season. This is where the marathon turns into the sprint.

Sounds like the right kind of situation for Mister Conte. Anybody up for spitting some more blood?

Juventus are on an uptick in form. This rise to first place is no fluke. Sure, the 14 draws are frustrating as hell, but taking 12 points out of a possible 12 in the last four games is the key to where they currently stand. Juventus has kept winning when they needed. They are getting it done on defense — arguably better than they have at any point this season — and the rest followed.

Le chiavi: While it's a two-team race at the top of the table, Lazio are in their own kind of battle when it comes to their place in the standings. They've got Udinese on their heels for the third and final Champions League spot with Napoli laying in fifth. And unlike Palermo, Lazio basically have their regular squad available.

Good news: As I said before, Juve's defense is getting better every single game. Gigi Buffon's goals against average is so tiny you might need a magnifying glass to see it. Just some perspective for you all: Marco Motta and Fabio Grosso were the fullbacks when Juventus faced Lazio in the second go-around last season. Seriously, I'm not joking. That's how far this defense has come in 11 months. Amazing.

Maybe even better news: The offense is waking up. Just look at what our recently-departed buddy said.

Everybody's healthy. That's incredible to think about while looking at other squads dealing with injuries every hour. 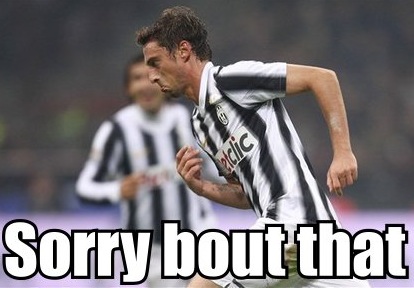 Bad news: Ummmmm...we can't expect Amauri to score a goal every week? I dunno. Juve's in first place, I can't really thinking of anything.

Oh, I got something! Mirko Vucinic will likely start. And Marco Borriello's attempt at a mustache probably still exists. There. Bad things.

I'd say 4-3-3, but everything we've heard is that Conte will roll with a 3-5-2. Seeing how it's worked well lately, it's not all that surprising.

IN CONTE WE TRUST.