"Say hello to my little friend the league leaders!" Such were the cheers at the end of Juventus' visit to Stadio Renza Barbera on Saturday, after another hard-fought victory against a team that historically loves playing against us.

The story is by now well known - the man we all love to hate, Amauri, put Milan out of its misery earlier in the day to gift Fiorentina a precious away victory and open up the door for Juventus' return to the top of the table. Our Bianconeri dully delivered and now control their own fate for the Scudetto with 7 games to go in the season. Let's not get too ahead of ourselves though. 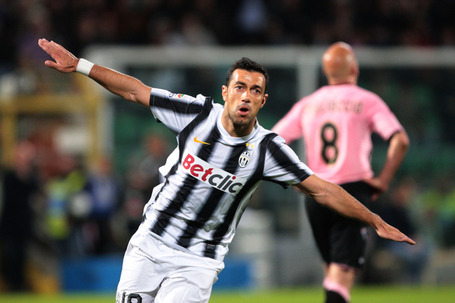 As it's been a tradition for years now, the stadium in Palermo featured almost as many Juventus fans as rosaneri. Antonio Conte wisely (or perhaps due to huge peer and media pressure) dropped Borriello to the bench and instead promoted Fabio Quagliarella to the starting line-up. Estigarribia came on for De Ceglie to try and give Juve a more attacking edge, while Caceres took Lichtsteiner's spot in a more suited for him wing back/right winger role.

In the midst of a fantastic atmosphere, Juventus came out the gates hungry and eager for a victory. Unlike most games this season, we not only dominated possession in the first half, but also created plenty of goal-scoring chances. In an all too familiar fashion, however, we couldn't convert any of them.

Palermo chose to sit back deep, playing with no pressing and waiting for Juventus to come at them hoping for a mistake and a counter-attack opportunity. After a fruitless first half, i Bianconeri played with a bit more patience in the second and eventually the opening goal game. Pirlo swung in a perfect corner kick which Bonucci directed towards the far post for a well deserved 1:0 lead.

A little bit later, Matri came on for Vucinic and immediately set up Quagliarella for the second and final goal of the game. Fabio seemed unfazed by his early misses and curled a low shot past the Palermo goalkeeper to put the game away for good.

Buffon: 6.5 - Once again, didn't have much to do as Palermo created little in front of him and had their first shot on goal as late as the 45th minutes.

Barzagli: 7 - Started off a bit quiet, though there wasn't much action for him to handle. Chiellini and Bonucci did most of the work early on as Palermo's "attack" came down their side. He did make a difference on a few occasions with his anticipation and strong air play. Another solid performance by Barzagli (that must be my most written line this season).

Bonucci: 7.5 - This is quite the trend developing in our team. Against Inter, Vidal had a spectacular game but Buffon was truly the man of match. The next game, Vidal claimed the hero spot while Bonucci had a fantastic game in his shadow. On Saturday, it was Bonucci's turn to be the most outstanding player on our team what with solid defending and determination, what with the excellent header for the opening goal (and some sweet outlet passes to our forwards).

Chiellini: 7 - I thought he did very well to close down Miccolli who can be quite the pest against Juve. Even pushed up on a few occasions to help out in offense. Good game by Kaiser Giorgio. 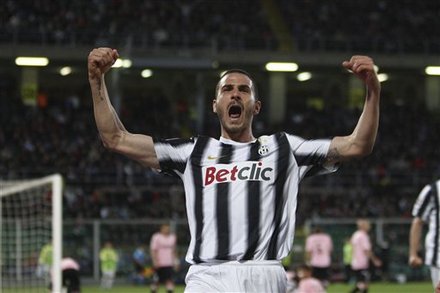 Caceres: 6.5 - He's getting really comfortable in the wing-back role in Conte's 3-5-2 and he is playing with a lot of confidence. He didn't have the luck on the day to score from a marvelous opportunity, but had a very positive game nonetheless.

Pirlo: 7 - Bagged the assist on Bonucci's goal from yet another set piece and was generally on target with his passing.

Marchisio: 7 - Was a lot more active in offense and it was refreshing to see him be so aggressive. Looked like him and Vidal switched roles for the game and Vidal stayed back more while Marchisio pushed up.

Vidal: 6.5 - Took a step back this weekend and played more defense than usual. Skyed a few shots and just in general never got into the game offensively. Worked hard as always though.

Estigarribia: 6 - I thought he was the worst Juve player on the day, though we were so dominant possession-wise that it wasn't really that evident. I believe Conte picks him over De Ceglie in more attacking positions due to his flair, but we haven't seen much of that when he's been on the pitch. I still maintain he is of very average quality and is not worthy of a Juve spot, curious to see if he stays in the summer.

Vucinic: 6 - For how defensive Palermo was playing, he actually found decent space pretty often on the night. He did snatch at his chances a bit and was generally ineffective. Del Piero + Quagliarella could possibly be a better option?

Quagliarella: 7 - Similarly to Vucinic, Fabio was quite impatient in the first half but refocused in the second and scored a fantastic one-timer curl. Our attackers are just so inconsistent that you never know what you're gonna get from who on a given night. Hope he finds some consistency after these last couple of goals.

Matri: 6.5 - Similarly to il Capitano last week, Matri recorded a great assist with his first touch of the game!

Conte: 7 - From the reports in the media after the game, he handled the half-time team talk perfectly. He made sure everyone relaxed a little, refocused, and was more patient in attack. This resulted in a more composed Juventus in the second half which was crucial for getting the win.

P.S. As you all know, Sir John has moved on and is no longer a writer on Black White Read All Over. I just wanted to bid him a heartfelt farewell and say thank you for all the reads, laughs, and a big thanks for recruiting me to the then Juventus Offside along with Aaron.
In the last few days, Danny and I have been busy in the mercato and have some exciting announcements to make mighty soon. So stay tuned!