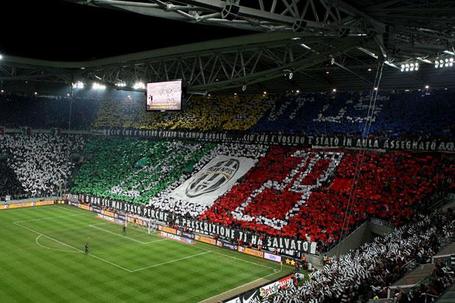 Big players step up for big teams and win big games. If I can sum up the Juventus v Inter game in one sentence, that would be it.

Gigi Buffon in the first half. Alessandro Del Piero in the second half. Arturo Vidal throughout the whole game. Giorgio Chiellini before, during, and after the game. When it comes to big games and the big stage, it is absolutely invaluable to have quality players that can rise to the occasion. That was the difference on Sunday night. That, and about 110 years of history and tradition on our side. But more on that later.

After beating Milan in extra time to qualify for the final of the Coppa Italia, Juventus welcomed a reeling Inter team that was sinking deeper in the table. As it is usually the case for a derby, however, none of that mattered.

The first half was one of the most exciting displays of football we've seen all season. Conte started the game with the tried and tested 4-3-3 formation with Caceres replacing the suspended Lichsteiner in right back the only notable change from recent games. Ranieri, shockingly, set Inter up in a compact 4-4-2 that gave Poli the job of marking Pirlo on defense and slotting behind the strikers in a Sneijder-like role in attack.

Both teams had a bucket-load of chances in the first half to no avail. Julio Cesar and particularly Gigi Buffon were at their best denying shots from inside and outside the box to keep the score 0-0 at halftime. Admittedly, Inter came closer to scoring in the first 45 minutes, but Buffon would have none of that. He made some world-class reflex saves and denied Inter any long-shot goals from their midfield. Juventus had their own share of chances but Matri, after finally getting the service he's been lacking, couldn't convert any of them.

The second half was a different story. Juventus came out more organized and hungry for reverting the momentum of the game in their favor. Possession was dominated, chances followed, and soon the score was 1-0 after a beautiful Caceres header opened the score from a corner kick.

After the opening goal, i Bianconeri regained their confidence while Inter was both tired and demotivated. Poli, Ranieri's jocker, was taken out for Pazzini and Inter went with a 3-man attack in Forlan, Militto, and Pazzini trying to get an equalizer. This allowed Forlan to play in a more of a playmaking role, but it also left more room in midfield for our MVP trio to roam and create.

Alessandro Del Piero took full advantage of the space and after pulling the Inter defense high, set up Mirko Vucinic for a lovely one-on-one with Julio Cesar. Unfortunately, Mirko scuffed yet another chance/shot on the night and rushed his shot straight at the Inter keeper.

It didn't take long for il Capitano to take matters into his own hands and seal the game with a goal. A beautiful Vidal through ball gave Del Piero the perfect chance to double Juventus' lead and the Legend did what he does best in pure Alex Del Piero style. Game, set, match Juventus. 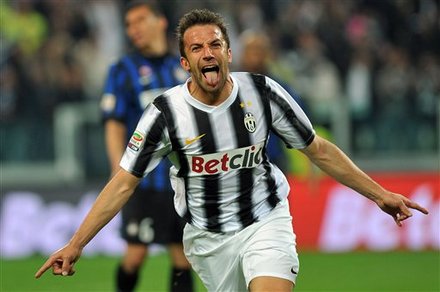 Buffon: 9 - What a vintage performance from one of the best goalkeepers of our generation. Gigi reminded everyone why he is still considered world class with several fantastic saves in the first half to keep Juventus in the game. Without him, none of the second half heroics would have been possible. Man of match, hands down.

Caceres: 7.5 - Welcome to the starting right-back spot, Sr. Caceres! With Lichtsteiner underperfoming in 2012 (and suspended for this game), Conte started the Uruguayan in a big match. Once again, he delivered on both ends and did fantastically to keep his composure for the opening goal. Not only that, he was a constant threat down the right flank and totally outplayed Pepe in attack. He was quite solid in defense too, bar a couple sprint races with Obi. Right now, he is our best right back and can really provide a spark for the rest of the season. Truly hope he continues this form.

Barzagli: 6 - Coming back from injury for his match, Barzagli certainly wasn't at the necessary level to be his usual self. He left too much space for Inter's attackers and was slow in reacting to the situation at hand. As much as I hate the 3-5-2, Conte was smart to put Bonucci in and help Barzagli in the back line. Can't wait to have good old Andrea back.

Chiellini: 7 - What a beast of a man. He relishes these games and leads the team both on and off the court. I cannot imagine playing a big game without him anymore. I actually really wanted him to take the shot in the end instead of passing to Quagliarella, but being the great teammate that he is he wanted to get Quaglia back on the scoring sheet and boost his confidence as a striker.

De Ceglie: 7 - It's been evident how well De Ceglie has played lately, but against Inter was the first time I've ever seen him play with total confidence in a big game. An excellent performance from the youngster who recently got a contract extension. We can see him maturing in front of our eyes this season, gotta say it's exciting seeing him come into his own. 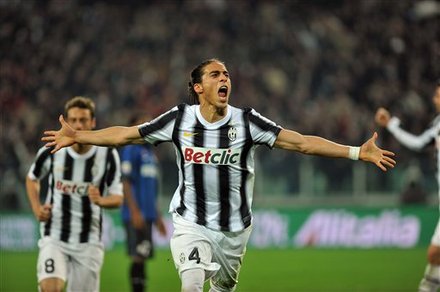 Pirlo: 6 - Some of you may think I'm being a bit harsh giving Pirlo such a low score, but dagnabbit how many times is he gonna lose the ball in front of goal and gift it straight to the on-coming opposition? I was infinitely annoyed with his turnovers on Sunday, and even if you take those out he still had a quiet game by his standards. Other than the assist to Caceres (which was perfect, btw) nothing else stood out.

Marchisio: 6 - Kinda fell back to his pre-Fiorentina version and was invisible for some parts of the game. Would have loved to see him make the adjustment in the first half and cut out counter-attack passes in the middle that led to dangerous Inter chances.

Vidal: 8 - If Gigi wasn't so outstanding on the night, Vidal would have been my choice for man of match without question. The man was everywhere, a true king on the field, recycling possession and contributing in attack. In fact, he was instrumental in the first half in bringing Nagatomo inside with his presence and runs, which opened up a lot of space for Caceres. This in turn forced Obi to track back more and made him less dangerous in attack. Lastly, his assist to Del Piero was just a beauty of a pass. In the toughest of weeks Vidal has picked himself up and is playing at the level we expected him to be at the beginning of the season. Looks like he's getting in form in the right moment for one last Scudetto push.

Pepe: 6 - Invisible, and the few times he did have the ball he either lost it with a bad touch or crossed it to no one. Too typical of a Pepe performance. Lichtsteiner was benched for his average performances, does Conte have the cojones to do the same with Pepinho?

Vucinic: 5.5 - How can a guy that had a goal and three assists last week and a scorcher of a goal in midweek play so terribly in a big game against Inter? I don't believe he was tired, in fact I'd go as far as to say he was too confident. Did you see him push Marchisio away? Who does that? He thought everything was gonna come easy to him like it had in the past couple games, but the complete opposite happened. It's so sad to see glimpses of how impactful he can be only to watch him turn in performances like these.

Matri: 5.5 - He wanted service. He got it. He couldn't score. He was taken out for Del Piero who pretty much changed the game himself AND scored. Not a good day for Mitra-Matri. 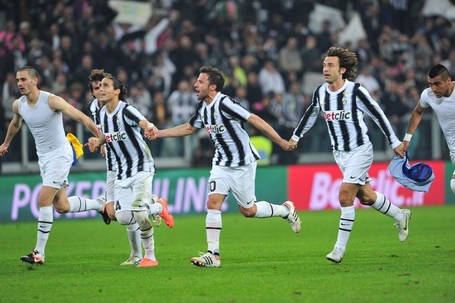 Del Piero: 7.5 - How does he do it? How does he make me fall in love with him again for the 1,569,237th time? And as a sub?! Incredible. This guys is a living legend and I LOVE the media pressure being put on Agnelli right now to sign him for one more year. I still have nightmares of him wearing that Milan jersey after the Coppa Italia semi-final. Thank god he didn't take or wear Maicon's this time around. COME TE NESSUNO MAI!

Bonucci: 7 - A short but positive performance for Bonucci. As soon as he assumed his place between Barzagli and Chiellini in a 3-man defense he looked determined and didn't let anything through.

Conte: 7.5 - He played it safe with his starting line up and soon saw that it wasn't working. Inter were surprisngly dominant in the first half and Juve lacked an edge in attack. Give him credit though - he realized the weakness and fixed it by bringing on Del Piero. He also adjusted on the fly and solidified the defense with a 3-man backline in the second half. This gave Caceres more room to attack and was a great combo of good offense and solid defense to preserve the lead. I personally would've taken Vucinic out a bit earlier, but I understand he has a decent rapport with Del Piero and Conte wanted to let those guys play up top together for a bit.