Juventus 2-2 Milan: Dancing With the Devil — And Into the Coppa Final

Share All sharing options for: Juventus 2-2 Milan: Dancing With the Devil — And Into the Coppa Final

Juventus and Milan's second leg of the Coppa Italia semifinals had just about everything you want when two of the giants clash.

This was everything we could've asked for in a Juventus and Milan matchup. Sure, the edge-off-the-seat stuff wasn't always good for our blood pressure, but sometimes there's no other choice. Juventus Stadium was at its best. The stadio was beautiful, with the tifosi setting the stage for an incredible evening even before the teams took the field in full voice from opening kickoff to the final whistle.

And at the end of 120 minutes,the scoreboard might have read "2-2," but we all know what was indeed the case; Juventus are headed to the Coppa final for the first time since 2004 and a chance to add the first silver star to our the fabled black and white jerseys. That's something we've all been waiting to see on the kit since the last time Juve won the competition back in 1995.

Now it's off to Rome where Napoli await. Who said the Coppa Italia doesn't mean anything?

Storari: 6 — Really couldn't have done anything on either goal. DId very well to control his box, especially in extra time. Conte put faith in Marco and he definitely showed why he is the best backup keeper there is in the business.

Lichtsteiner: 6.5 — Much more of a Steiny game from the first half of the season rather than the second.

Bonucci: 6.5 — For a guy who has been under a pretty large spotlight due to his recent struggles lately, Leo did very well. If he didn't get absolutely beasted off the ball by Maxi Lopez on Milan's second goal, his rating would have been ever higher. Definitely a game to build off of both physically and mentally.

Chiellini: 6 — Here's something that will surprise all of you: Giorgio marked Ibrahimovic extremely well. Shocking, I know. Aside from that, nothing too outstanding in his outing. Solid, but nothing spectacular.

De Ceglie: 6.5 — As the games go by, Paolino only continues to get better. Was more of a defender than a contributor on both ends of the field against Milan, which is good to see considering De Ceglie's defense has always been trying to catch up the offense. On top of the new contract he signed on Wednesday, PDC certainly deserves the praise he has been getting in recent weeks. 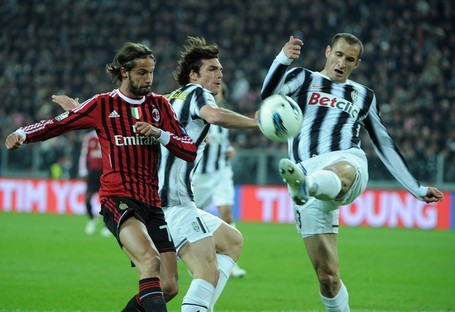 Vidal: 7 — Another absolute workman-like effort from King Arturo. He just runs, runs, runs and never seems to get tired. He's an absolute beast of a player. And while WhoScored didn't post any kind of stats for this game, there would be no surprise if Vidal's name was towards the top of the tackles chart. He was everywhere defensively.

Pirlo: 7 — Maybe not the all-around flair like in the win against Fiorentina, but Jon Bon Pirlo was still incredibly effective. And the thing that surprised me the most: how often you saw Pirlo racing back to help on the defensive side of things. Yeah, he's got nothing left, huh, Milan? Heh.

Giaccherini: 6 — DId a whole lot of running and that's about it. Couldn't convert a one-on-one opportunity in the early stages of extra time that just kinda summed up his night. Giacchomole had been the Coppa Italia secret weapon up until Tuesday night, but things were just hard to come by for him. 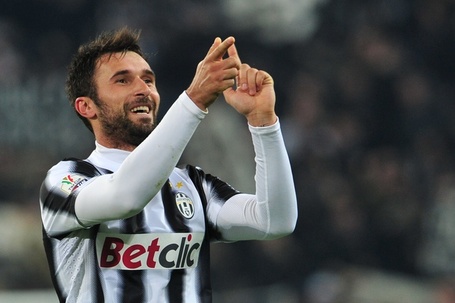 Vucinic: 7.5 — Where was this Mirko during the beginning of the season? Holy cow, what an absolutely amazing week he is having. He was a bit more selfish than he was against Fiorentina — as shown by his reluctance to pass to a wide open teammate and instead try to get by half the Milan squad on more than one occasion — but he still played a very good game. And that goal...MAMMA MIA WHAT A GOAL!

Del Piero: 7 — In Conte's 4-3-3 formation, there wasn't really an obvious position to slot Ale, so he took the role of a prima punta for the night. Seeing ADP celebrate a goal at home was something we have waited too long to see. It wasn't just his goal that got him this rating. Il Capitano contributed throughout his 70-plus minutes on the pitch, holding up play and distribute to teammates.

Pepe: 5.5 — I'm looking right at you for the reason as to why Mesbah scored, Simone. Pepe let the Milan left back fly right by him for the wide-open header for Milan's opening goal that leveled the score at 1-1. Didn't do much in attack and replaced by Conte after just 60 minutes.

Marchisio: 6 — Principino didn't do all that much after he came on for Pepe 60 minutes in. Had a pretty damn good chance to score a goal of his own just a minute into extra time and recorded one of the easiest assists of his career on Vucinic's wondergoal.

Borriello: 4.5 — Um...yeah. The Borriello Experiment has run its course. How he can still be ahead of Quagliarella in the pecking order is something I'm still scratching my head over. Marco didn't do much of anything after replacing Del Piero in the 73rd minute. Don't even get me started on that one-on-one chance with Amelia. Return to sender, please.

Caceres: 6.5 — This is was the kind of game where we can could really see the development of Martin since his first stint at Juve. He may have played 30 or so minutes, but he was solid as can be against Milan. With Lichtsteiner suspended for Inter this weekend, it was good that Caceres got off the bench and got a good chunk of minutes make sure there wouldn't be any rust.

Conte: 7 — Just how intense was this game for Antonio? Just check out the postgame interviews — he wasn't there. This clash left the Juve boss without a voice. Even without that voice of his, he out-coached Allegri — again. His side dictated the tempo for practically the entire game. His subs weren't awe inspiring to say the least, but the way his team played certainly merits a lot of deserved praise.