Share All sharing options for: Interview With Paolo Montero

When Martin Caceres lined up as a centre back against Bologna two weeks ago, he marked the return of an Uruguayan in the center of defense at Juventus since the great Paolo Montero ferociously lead our backline. A Juventus legend and an ever-solid central defender, Paolo Montero is not only the epitome of an unforgiving centre back, but an example of how a player can lead his teammates with passion, hard work, and determination (if not a slight rage and crazy outbursts). Growing up and watching Montero and Iuliano frustrate defenders was legendary for me - to this day I often compare defenders to Montero's solidity as measure. 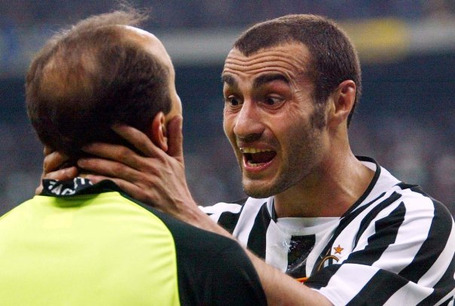 Paolo found himself in Turin this week and, over cappuccino with Chimenti and Secco (can you pick a more random crowd?) gave an interview to Tuttosport that is quite interesting. Here's how that went.

Since January, your number 4 jersey belongs to another Uruguayan, Martin Caceres. Are you surprised to see him back in the side after his loan in 2009/10?

It makes me happy, he is an excellent defender. At home he is an idol like Suarez, Forlan, Cavani, and that whole group that won the Copa America in the summer.

The fans see a bit of your aggressiveness and "evil" in Caceres. He seems to never give up, just like you...

That's just how we are, it's part of who we are. I wish him all the best with Juventus.

How does this season look to you now that you're on the outside?

I didn't have a chance to see the Genoa game, but in general the path is the right one - I see an aggressive and determined team.

Playing and coaching is not the same, but Antonio has demonstrated his skill on the bench as well. Even in Siena I knew he was going to be a successful coach, though I don't like when people compare him with other coaches. Conte is Conte. He has, however, benefited from having great coaches himself in Lippi and Ancelotti.

The delayed games and Juve's recent case of "drawnitis" have allowed Milan to create a 4 point lead in the standings. Is the Scudetto Milan's already?

Definitely not. 4 points in 11 games is very doable, plus Milan has the derby against Inter. Juventus must believe.

What Juventus player has impressed you the most?

Pirlo. He really is a class of a player, hope he continues to play well till the end.

Vidal has also been a nice surprise.

He hasn't surprised me, I knew he was good before the season. In the Copa America over the summer he showed that he is a talented midfielder.

I heard Vidal was partying hard this weekend?

I should be the last one to comment on that, you could write a whole encyclopedia about my escapades... :)

Juventus' management intends to get a world class striker in the summer. In the mix are Higuain and Tevez, as well as two compatriots of yours, Cavani and Suarez. Who would you recommend of the last two?

Both of them. They are different but excellent players.

Whenever Carlo Ancelotti speaks of his era at Juventus, he never fails to mention your importance to the team.

It makes me happy, we had an excellent relationship. Ancelotti is a great coach and a great person. I hope he can win with PSG.

In 2007, you retired from active football and you're now an agent. What Uruguayan players should we lookout for?

Emilio Penarlo MacEachen. He is 19, a central defender, and very promising. Like all young South Americans, it would be best if he gained some experience at a smaller team before coming to Juve. Similarly, I did so at Atalanta and then Juve.

What do you miss the most from you playing days at Juventus?

The atmosphere in the locker room, hands down.

Who were you really close to?

Are you still in touch? He will be playing against Juventus tomorrow with Fiorentina.

I'm still in touch with all of my former teammates. Ruben is a good friend and a very good player, his transfer to la Viola didn't surprise me in the slightest. 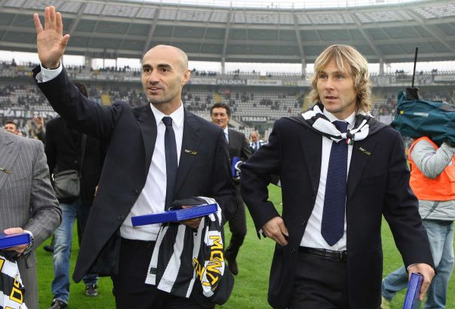