Genoa 0:0 Juventus - An Improved Performance For Yet Another Draw

Share All sharing options for: Genoa 0:0 Juventus - An Improved Performance For Yet Another Draw

Our beloved Bianconeri may have gotten their 4th draw in a row and 14th of the season, but after a long, painful time of watching a toothless Juve side we finally saw some improvements this weekend that maybe things will turn around soon.

Ironically, the turn of style came in a game of many irregularities for Conte's meticulously organized side. First and foremost, Juventus' top 3 centre backs were all out of the game due to injury (Barzagli and Chiellini) or suspension (Bonucci). Then, the true leader of our recent Juventus revolution, Antonio Conte, had to watch the game from the stands after his own suspension against Bologna a week prior. Lastly, Genoa was forced to field an odd lineup after having to do without 3 starting defenders themselves.

It was always going to be an open match given the circumstances. With Vidal and Caceres covering in the middle of Juventus' defense, Genoa tried to split the defenders on counter attacks and played high balls over the midfield to Palacio and Gilardino.

In fact, Genoa nearly opened the scoring in the very first minute when Palacio forced Buffon to a fingertip save with a lob shot.

Juve didn't need long to respond and started attacking early on too. While Genoa had some occasional chances throughout, the majority of the game consisted of Juventus trying to score and demonstrating indefinite ways of failing at the task.

It wasn't the same boring tune of late, however. We actually created goal-scoring chances, hit the post a couple times, had a goal disallowed for tight offside, and looked a lot more dangerous than all recent stale games combined. Heck, there was even an Eljero Elia sighting!

Unfortunately, we did miss out on the most important thing - winning the actual game. In retrospect though, a line-up mix up and Conte in the stands may have been just what the Bianconeri needed. This team obviously has a ways to go until they are true Scudetto contenders, but the foundation is being laid in front of our eyes. Hopefully Conte and the management will sit down, look at all this film in the summer, and recognize the gaps that need filling. In the meantime,

Buffon: 7.5 - Kept a clean sheet like a stud and denied Genoa any tricky goal-scoring chances. Did very, very well to communicate with his new defense and kept the two South Americans in check in front of him. He reminded of Buffon of old - stable and confident of keeping every ball out of the goal. Stud.

Lichtsteiner: 6 - He's gotten a bit of the Krasic syndrome and spends more time falling down trying to get a foul than staying on his feet and winning the ball strongly. Frankly, it's annoying to see from such a consistent player in the first half of the season. Overall, he did well in defense but was a bit poor in attack. Wish he crossed the ball more and overlapped more with Pepe.

Caceres: 6.5 - Many regard him as a natural center back though he's always played on the right side when I've watched him. Either way, Martin did a decent job staying with Genoa's attackers and was very comfortable pushing and passing the ball.

Vidal: 6.5 - Like his fellow South American in defense, Vidal looked a bit out of spot but handled the situation well. Caught himself pushing too high up with the ball early on, though the tendencies are only natural for a midfielder. It was refreshing to see him and Caceres show us what it's like to have center backs that can pass the ball.

De Ceglie: 7 - Played with extra hustle for most of the game and defended well. Was lucky not to get sent off late in the game though. He'll need to contribute to attack more if he is to become the two-way player we need in his position. 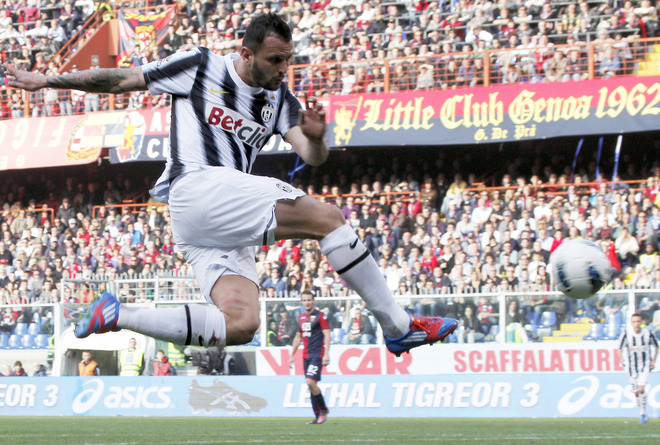 Pirlo: 7.5 - Andrea sat pretty deep in front of our defense, using Giaccherini as the speedy outlet guy for Juventus' attacks. He seemed fed up with the draws as much as anyone and was genuinely trying his best to get Juve a goal. Took his shots well, made some great passes and crosses, but the team just couldn't find the net on the day.

Marchisio: 6.5 - Claudio started the game off terribly after 3-4 botched passes straight to the opposition in midfield and a missed sitter in front of goal. And while I was thinking of how to articulate yet another disappointing performance by our Principino, he picked the tempo up and looked more of his old self in the second half. Hoping he'll be even more of a force next week alongside Vidal and Pirlo.

Giaccherini: 6.5 - Started the game with a lot of energy and pace, but couldn't hold that level to the end. Was happy to see him embrace the playmaking role in attack in the first half. That said, he is not the man for that position. There were a few instances in attack when I caught myself longing for Diego - man he would've torn the silly Genoa defense apart with Sunday's system.

Pepe: 7 - Worked hard on the right flank and maybe harder than anyone on the field during the game - you have to give him that. He created chances for others and was very unlucky to have his goal disallowed. He still hasn't improved his crossing and decision making though, which drives me absolutely bonkers. Why does he switch to his left foot before shooting if his right foot is infinitely better? Why does he cut inside with his head down when he has 2 open players waiting for the drop pass? PEPEEEEEEEEEEE!

Vucinic: 7 - Mirko looked like a different player than the one against Bologna in midweek. His was dribbling past defenders, spreading play, putting teammates through, and for the first time in a long time, made the right football decision more often than not. That said, he was wasteful and his inability to be clinical in front of goal has really hurt our creatively-limited team.

Matri: 6 - Matri got himself in some good positions, but had several promising shots blocked. Still, one instance really caught my eye. In the first half, Matri was put through on goal at the edge of the box and instead of going for the cross-goal shot, he took more dribbles to side and got himself out of position for a dangerous shot. Then he had to pass the ball back and messed up the whole goal-opportunity. The Matri of last year/beginning of the season would not have done that. Stop overthinking things Matri and just play your game. We desperately need it. 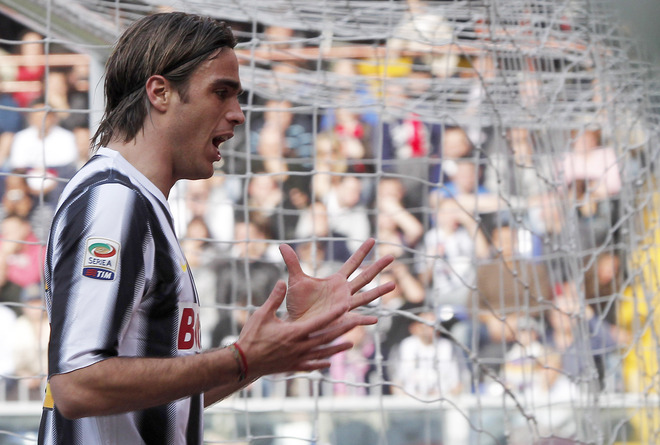 Elia: 6 - It was so weird to see Elia play! He had no idea how to handle it either. Was he supposed to go out and impress everyone with his dribbling skills? Was he supposed to be the defensive worker Conte presumably fears he is not? Was he supposed to try to score or set up others instead? Poor kid was totally lost out there. Still, there were some positives from his brief appearance. Did you see him fighting for the balls he lost and winning them back right away? That's the attitude Conte wants to see. His dribbling was pretty bad, but at least he made up for his mistakes right away. I'd love to see this guy play more. I have a feeling y'all agree.

Conte: 6.5 - Managing such a weird game from the stands must not be easy. Still, the Mister did well to cover for the missing trio in defense and finally unleashed Elia (and Del Piero). Was he happy with what he say? Who knows. We'll find out in the coming weeks. His silencio stampa hasn't helped anyone gauge his feelings for the game. Either way, it will be good to see him back on the sideline next week.