You can't say that was unexpected. A side that was just out of the relegation zone played tremendously organized, compact, and defensive football and got a point at the shiny Agnelli Arena (it's what I like to call the unimaginatively-named Juventus Stadium, for kicks).

For 85 minutes our Bianconeri couldn't find a way past the Siena defense, were out of ideas, and got little for the hard work they put in keeping possession and hustling on the pitch throughout the game. Juve did have a couple decent chances, namely Vidal's shot, Matri's header, as well as Lichsteiner's flick, but none of them found the back of the net. We finally woke up a bit in the last few minutes, even had a claim for a penalty, but we didn't really deserve a win and unfortunately we got what we deserved. Two more points dropped at home against a relegation candidate, which could've increased our gap over Milan in the standings and would've given us a bit more breathing room for the...(don't go there Ivo, you say). 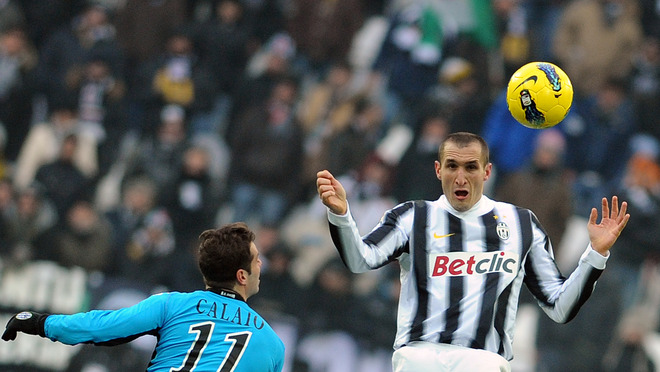 I know, I know. We are all petrified of even admitting to ourselves that we have a chance of fighting for the scudetto this year. I know I am. We've been burned too many times in the last 3 years. The reality is that 21 games into the season (some are at 22), we are still first, undefeated, have a game in hand on Milan, and have let in the least amount of goals by far (13 to Milan and Viola's 19). Furthermore, we don't have any serious injuries, just strengthened all areas of the field with a player (well, depends on what you think of Padoin and BorielLOL, but at least they are new and fighting for a sub-place), and are arguably not even maximizing our full talent yet (just ask Elia).

But seriously, it's starting to look like a two-horse race. For ~60% of the season so far, it's been a battle between Milan and us. And I see it staying that way until the end. Except Milan can win against the smaller teams, and Juventus can't. On the other hand, Juve can grit out the big matches, while Milan rarely shows up and then slaps people in frustration (hah!).

For the neutral Serie A fan (or a fan of any team other than the top 4), Juve's draw against Siena was great since it kept the race tight. Us Juventini already have that feeling like we're gonna regret the shit out of these games at some point in the next few months. I really hope not.

Buffon: 6 - Wasn't that busy throughout the game, after all, Juve did have 70% possession overall. He did scuffle a shot that he should've tamed, but Siena's Gazzi couldn't punish him for it.

Lichtsteiner: 7 - Pretty standard game from Lichsteiner. Did his defensive duties well, though I wish Pepe could've done better on his part up the field so Steiner wouldn't have had to compensate for his role too. I do get frustrated with how much he complains about decisions and always looks incredulous. I think Serie A's refs are too. He needs to start making more runs in the area without the ball; Pirlo almost found him on one again and he almost scored. Good game from the Swiss overall. 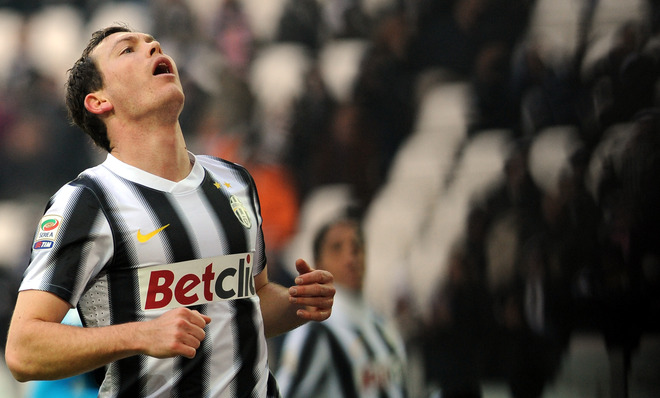 Barzagli: 7 - Speaking of standard, that's probably Barzagli's middle name. Another solid game from the in-form defenseman. I love how it doesn't matter at all who he partners with in D, he still gives his share at a high rate each game.

Chiellini: 6.5 - Gave Chiellini a slightly lower grade than Barzagli because he still isn't comfortable pushing the ball up a bit. We need that sometimes, especially in games we dominate. It puts an extra guy in the opposition's half, and makes it tougher to defend if he can find a midfielder with a good pass to start an attack. Hope he gets better in that area. Defensively, rock solid as always.

De Ceglie: 7.5 - Honestly, my man of match. Paolino was on point throughout the whole game, especially offensively. He made runs, played intelligently (without leaving big gaps behind him), and aimed his crosses well. If Vucinic was up to his task on Sunday, the duo could've created even more problems down that left side. It was very refreshing to see some service from that flank. Hope De Ceglie keeps this up, it is obvious that Conte has no problems giving him that role against smaller teams.

Pirlo: 7 - Andrea actually saw a lot of time on the ball, a lot more than I expected him to get. He had some decent ideas, some that the likes of Vucinic, Matri, and Pepe recognized too late at times. We did rely on him to create some magic as we have in the past, and that is really the rest of the team's fault. 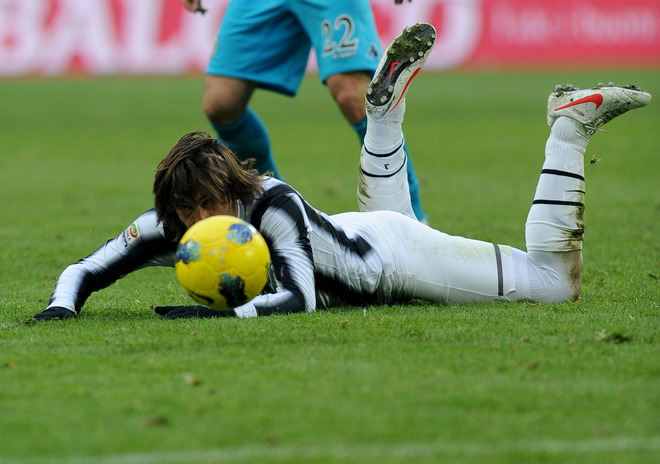 Vidal: 6 - Not a bad game from King Arthur, but very often he got lost in the midfield shuffle. He needs to recognize when to make a run forward and pull defenders with him, and when to drop back and help take the ball out. Usually Marchisio does this for him, but it didn't happen on Sunday and it exposed Vidal's lack of smart involvement (that sounded like something I pulled out my ass, but it makes sense in my head. It really does.)

Marchisio: 6 - Was once again disappointed with Marchisio. He has now raised the bar for his performances so high that a quiet, average game makes him look like Pepe on a good day. And that's baaaad. He'll pick himself up tho. You know how I know? We have some derby matches coming up. He always performs in those.

Pepe: 5.5 -Some of you guys said it perfectly in the comment section during and after the game - Pepe is reverting to his usual, normal self who is underwhelming and undeserving an attacking winger role. I think he does great in situations where we play away against a tough opposition, so you can count on his defensive ability and hope luck brings him something useful up front. But against these minnows at home? We need a winger that will own that right flank and be a nightmare for defenses. Kinda glad he got injured and was subbed off (not that I wish him harm, just thought he shouldn't have been playing). I would've put Elia on in his place and make him an inverted right winger, Robben style.

Matri: 6.5 - The January player of the month got off to a slow start (together with the team) and never really found his role in the game. He was smart to come deeper and play with his back to the goal a bit, since Marchisio and Vidal failed at providing through ball opportunities (or even short pass ones) for Pirlo and the full backs. Just when he looked like he got out of that slump, he had another very tame game. We'll need more from him up front, or he'll be ass-kissing the bench (literally, of course). Especially given Conte's strange infatuation with BorielLOL.

Vucinic: 5.5 - C'mon, Mirko, we're playing Siena at home and you're waiting for the game to come to you? Attack that 10-man defense, shuffle a couple players, do a one two with Matri or De Ceglie...attack for christ sake! Don't wait for stuff to happen for you, MAKE IT HAPPEN YOURSELF! He has the talent and technical prowess to outplay Siena defenders, but doesn't even try. Infuriating.

Giaccherini: 6 - Maybe he came on too early to provide a more energetic boost, but I though Giaccherini's contribution wasn't like what we've come to expect from the energetic little man. I don't like when he starts games, and I don't like when he comes on before the 55-minute mark. But it could just be me. He's best suited to run headlessly at or around defenders for the last 30 minutes of the game when defenses get tired. Otherwise, he can be pretty predictable.

BorielLOL: 5.5 - I love that nickname for him btw. Who of you geniuses came up with it (or stole it from another blog)? It's immaturely hilarious. As for Marco's performance, I maintain he shouldn't have come on at all. We needed some creativity up front, something different than what we were already doing (or not doing). Everyone and their mother agreed - Del Piero shoud've come on instead. But Conte made his decision, and in Conte we trust (right?). And Marco disappointed, as we all expected. To be fair, it's pretty hard for a player like him to make an impact in 25 minutes against a well-organized side like Siena. If it happened, it would've been a tap-in or a header. He had a chance for a header but scuffed. Then he started falling down too easily and the ref was never gonna give him anything. I still don't know why we got him, but am excited to be proven wrong by him. Or Conte.

Quagliarella: sv - If Marco had no real time or chance to make an impact, Quaglia had less. At least he was a more creative option up front. If Conte doesn't like Elia, maybe he can start Quagliarella in Vucinic's place next weekend and see how that would go?

Conte: 6 - For a match against his former side, Conte really should've anticipated the parked bus. Also, he relied on Pirlo too heavily once again. Caceres, Padoin, and Boreillo are surely not solutions to our creativity problem. For how smart he's proven to be so far, i have a feeling he is cooking up a solution for all this on the training grounds and is waiting to release the Kraken as soon as the snow melts in Europe. Let's see how he handles the Milan coppa game. 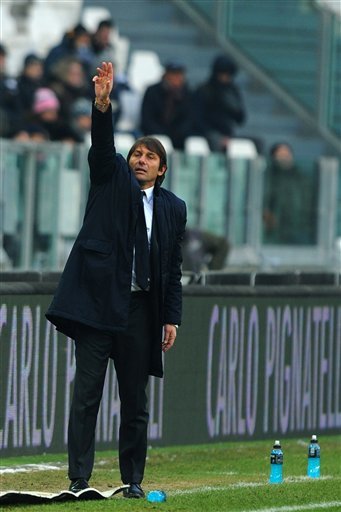 #1: Caceres, Padoin, Boriello, and Del Piero will all start against Milan - most likely. I'd love to see Elia in Esti's place as well, but so far that's just wishful thinking. Either way, I am stoked about the Milan game. Senor Danny already has a preview ready for that cracking Champions League match, which will be live on the Juventus Offside shortly. Till then, just think of Del Piero's goal against Roma and how something similar could happen tomorrow. Awwww yeahh.