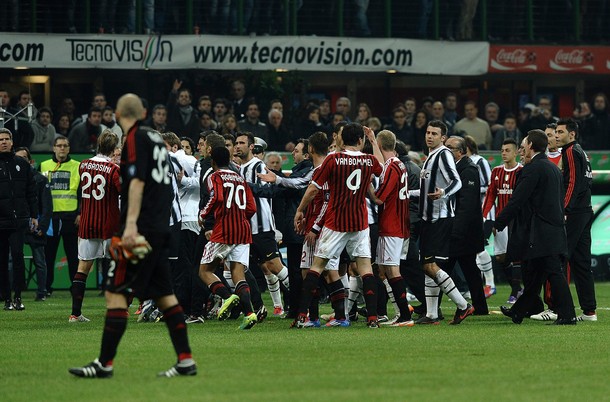 Well, for the first time this season, I can honestly say that Juventus were outplayed, and didn't deserve to win. But that's why you play 90 minutes of soccer football. A couple of thoughts:

Adriano Galliani - really? Didn't you say that it's unbecoming of a big team to complain about the referees. If reports that at halftime you screamed at the referees are true, then isn't that just the definition of hypocrisy. Your post-match comments alone made you look small. Practice what you preach.

Conte wasn't a saint himself, but he apologized at least. Passion gets the better of you at times, but come on. Be consistent.

Milan outplayed us for a good 60 minutes. But how many games this season did Juventus outplay another team, only to walk away with a loss? Oh wait, that hasn't happened yet. I mean a draw. Quite a few. Again, that's why you play the full 90.

Despite the result, in 3 games versus Milan this year, 2 wins and 1 draw is pretty good. We'll see them back in Turin for the second leg of the Copa. Last night's game will only make that fixture more fun.

Sulley Muntari was denied a clear goal. So was Ale Matri. They cancel each other out, period. Arturo Vidal did his best Felipe Melo impersonation and deserved his straight red, but both Mexes and Van Bommel *and* Muntari were lucky not to be shown the door way earlier.

I understand the argument that being down 2-0 would have made the game completely different than 1-0. To that I can retort that a two-goal hole didn't bury us when we were away in Naples. Also, 2-0 11 vs. 11 is way different than 2-0 10 vs. 11. You can argue hypotheticals all day, but the reality is what happened. The most likely alternate ending would have been a 2-2 draw, with strikes from Nocerino and Muntari canceled out by a Matri brace.

This season is turning out to be a wild one, and whoever comes out on top will undoubtedly deserve it. I have respect for Berlusconi Milan, as much as I'd love to hate them. They aren't at Sfinter level for me. The clubs have historocally had cordial relations with each other, and I have respect for our friends on that other Offside page. If the next decade is one of Juve and Milan slugging it out at the top of Serie A and reppin' Italy well in Europe, well -- I can live with that.

I'll see you all in May. But in the meantime, there's that whole Copa Italia thing...