Share All sharing options for: Round 25 (24): Drama? Controversy? What Dramaversy?

Which story should we latch onto at this very moment? Let's see...there's Pirlo's first second first second return to the San Siro, the first of which is in league play, to face Milan. Whew. There's the fact that in two games versus Milan this season, we're a sparkly 2-0 against them (I'm not going to explain this any further, as my first sentence nearly gave me a seizure); the most recent match a triumphant return for Offsides favorite Martin Caceres, and giving us the edge going into the return leg at the sparkly Juventus Stadium, and fueling my never-ending love for run-on sentences. There's the ever-present questions over the formation/starting lineup. And, invariably, there will be me clamoring for more creative options in the lineup. Or maybe not this time. 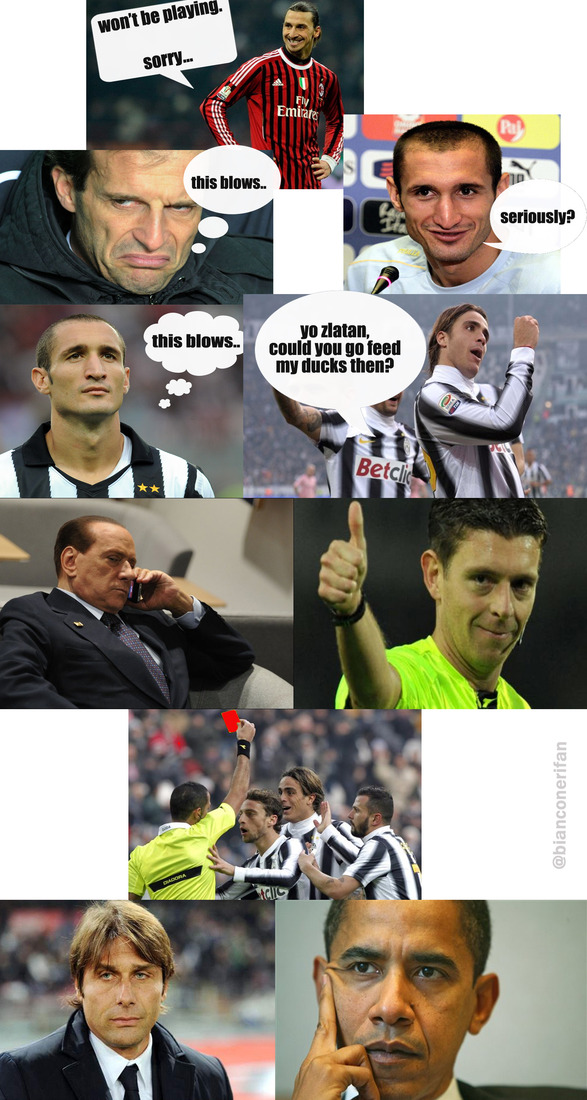 Oh, and there's that whole little "Zlatan" thing.  And the whole "the team in black and red is owned by a hybrid Charlie Wilson goes Euro and becomes a Bond-Villain" thing.  No, I will never get tired of this.  Get used to it.  Especially now that he's no longer Prime Minister, and I don't need to worry about my Italian passport being revoked, although I may wish to keep an eye out for piercing, scandalous exposes about me being featured on Telemilano.  I'll take my chances. 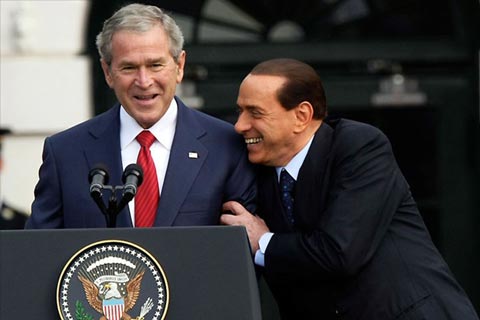 "So then a' the...come si dice, 'dottore,' in Americano...the, it's not like a student. Oh you say doctor? Okay, so the doctor says a' to tha' wife...'Rectum?! Managgia, you near kill him!' BAAAHAHAHAHAHAHHAA!"

No, after failing to convince the appeals board that slapping an opposing player in the face (reminiscent of Napoloen) is not as bad as diving, Zlatan will be watching on the T-V-ihinovic (see what I did there?).  Great news, right?  Oh wait, this is a team that has strikers like Robinho, Pato, Cassano, and *gasp* Maxi Lopez at their disposal as well.  To that I say, thank God that the injury fairy flew from Turin a little farther East this season.

Le chiavi:  I wrote back in October that the key to this match would be using our strength out wide to exploit the narrow formation Milan prefers.  To be more precies, here were le chiavi for that match:

Tactics – wide and outside.

Massimiliano Allegri likes to set up his squad in a 4-3-1-2 formation, making for a pretty narrow midfield.  Conte likes to use formations which are heavily reliant on wingers pressing forward and stretching the field.  However, this begs the question as to whether his conventional 4-4-2 will be the preferred antidote.  It’s looking like Milan’s midfield will consist of Seedorf, Van Bommel and Nocerino behind Aquilani. This would lead only Marchisio or Vidal to look out after our precious, most valuable turncoat (thank God he did), in a crowded centralized midfield.  Last week he employed a 4-2-3-1 for the first time this season.  Was that a harbinger of things to come?  Perhaps.  He could still employ wide players to stretch the field, while protecting the midfield where the most important battles will take place.  The personnel is certainly available.  It could be that last week the Count wanted give the new formation a whirl before he had to unleash it against a big team.  The fact that he has been conducting closed training sessions since at least Friday may be indicative of such.  Tuttosport, however, did reportedly capture footage of il mister in front of a whiteboard maniacally shouting in a Romanian accent, “Four-Two-Three-Von!  Ha!  Ha!  Ha!”

At any rate, the wings will be the key, while a combination of Marchisio, Vidal and Pirlo will better ensure that the latter doesn’t get destroyed in a crowded central midfield.  A triangle in the central area of the pitch of the three players rotating in and out of each other’s positions in some form or fashion has long been a dream of mine, sort of like Scarlett Johansson pictures leaking.  Sometimes dreams come true, although the former may not anytime soon due to Conte’s slow integration of newer players who are unaccustomed to Serie A and the Italian language into the squad.

While I was lying about Conte's Count Chocula shtick, the wide strategy seems to still be on the table.  Only by now my wet dream about Scarlett Johansson an M-V-P midfield is so old-hat that it has it's own nickname, and the formation has been slowly shifting to a 3-5-2.  Conte first used it to mirror opponents playing the same formation (see Napoli, Udinese), neutralizing their free-flowing wingbacks.  Now, it's starting to become part of the normal repertoire.  This allows for two things:  one, it keeps our three best midfielders on the pitch at once (M-V-P), as well as our three best centerbacks (C-B-B, eh it's just not the same), and keeps Giorgio Chiellini out of the leftback position to the delight of my wife (I get cranky when he plays there).  It worked a couple weeks ago at San Siro. 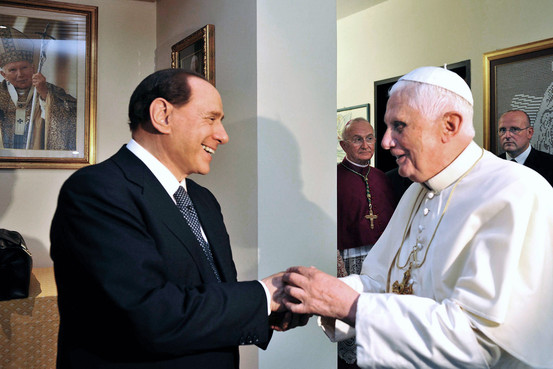 Good news: Injuries, and lack thereof, obviously.  While we're at full strength, Milan will be without Ibrahimovic and the ridiculously in-form Boateng, who got injured at one of Silvio's Bunga Bunga Parties (credit where it's due).

Time for the bad: Milan still have one hell of a team.

But we have Antonio Conte.

What's this?  I'm not clamoring for Elia to start?!  You betcha!

Our biggest problems against provinciale who like to park the bus is the lack of creative options on the pitch to unlock them.  Against the bigger clubs who will attack, industrious players have worked out just fine.  I'm happy to see that trend continue.

And I'd love to see PDC vs. Abate, just for personal reasons.

I know Berlusconi is a powerful man, but getting the Prime Minister of Germany to join his team and accept a bench role?  That's impressive, Berlu. 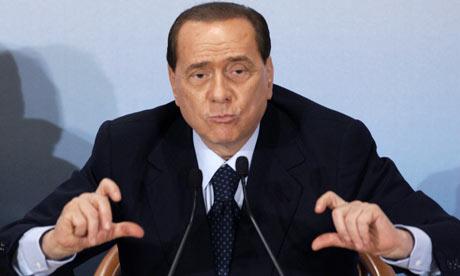