Share All sharing options for: Round 24 (22): Juve Visit Parma and Undefeated Donadoni

I literally jumped out my seat tonight as I watched Jeremy Lin (aka Super Lintendo) continue his outrageous run in the NBA with a game-winning three. "This has nothing to do with Juventus", you'll say. Wraung! I hadn't jumped out my seat in a long time, I thought. And instantly I knew why: it's been almost 7 days since Juventus played, when it should've been 3. Way too long.

After this weekend's postponed game due to heavy snow, Juventus is snow-shoeing down to Enio Tardini to take on Parma in a game that was rescheduled due to heavy weather conditions as well. 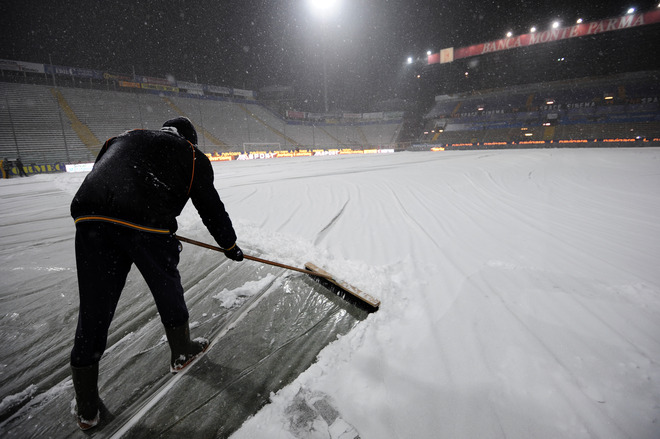 For the first time in a while, we won't be going into the match while holding the no. 1 position in Serie A. Milan is back up there now, 2 points ahead, with 2 games more than us. This is one of those games.

Last time we played Parma, it was our first official game at the Agnelli Arena and Juve put in a classy, 4-goal performance. On that sunny day back in September, Del Piero got a start and an assist, Pirlo hooked up with Steiner for the first (of many) times for a sweet goal, and Vidal and Marchisio scored some sweet volley goals.

Sadly, as is always expected, Giovinco did score against us (albeit from the spot). I don't need to tell you he's probably going to do the same on Wednesday. At least I'm writing this preview, cuz we all know how the John feels about him.

Juve News: Both teams are rested as both teams had their games postponed over the weekend. Conte is likely to continue with the 3-5-2 that dismantled Milan at Giuseppe Meazza last week, especially since Donadoni likes playing that with Parma as well.

Barzagli and Chiellini are sure starters, and I sense Bonucci will partner them in defense to complete the backline. Caceres did have a fantastic game against Milan offensively, but defensively he still has to learn his positioning and needs to get in the constant-pressure-grinta-till-your-tongue-bleeds spirit. He'll get there tho.

Despite receiving a red-card and giving away a penalty against Parma last time around, De Ceglie is expected to start on the left alongside MVP & Steiner. It would be lovely to see a Quagliarella-Matri partnership up front, but I have a feeling Vucinic will get the nod one last time.

Parma News: Best news for Donadoni and his team is that they are well rested, which is necessary against a side like Juve that presses a lot and runs the whole field tirelessly. The former Azzurri coach has yet to lose with Parma in 4 games, and will like his chances on Wednesday despite Juve's undefeated record.

Former Juventino Antonio Mirante should be healthy and back in goal, Mariga will be the midfield anchor, and Floccari + Giovinco will be the attacking options. No other injuries for Parma.

Giovinco is an obvious one. If he's smart (which for such a big head he should be), he'll be running wide a lot trying to stretch our 3-man defense and create gaps between them. It will also force Lichsteiner to play more defensively which should make him less of a threat in attack. I see Giovinco playing more of a wide seconda punta role, that way Floccari can play his natural striker position, which no one has been able to define yet.

Things won't get any easier for Lichsteiner as Massimo Gobbi is also a good attacking player down that left hand side. Even though he plays left back/wing back naturally, the former Viola defender is a good crosser of the ball and pushes up quite a bit in Donadoni's 3-5-2. Biabiany will likely be used as an impact-sub, and the former Merda player could cause problems for our defense late in the game with his pace.

For Juventus, Marchisio and Vidal will have to execute their roles of Pirlo-guardians as well as possible for us to have a chance at a win. This is no time for average games from our future captain. He needs to step up, provide an additional option for getting the ball out of defense, and also help our struggling attackers with runs in the last third of the field. Same goes for Vidal, with a lesser dose of hectic, of course.

Lastly, if Bonucci plays, you can bet your ass Giovinco and co. will try to get him exposed on the break. Could be a chance for Leonardo to impress with some quick thinking and no-bullshit type of performance.

Referee: Paolo Mazzoleni - does that name sound familiar? It's because he was the referee of Milan vs. Juve last week in the Coppa Italia. Under his "whistling", Juve have 4 wins, 3 draws, and 1 defeat.