To be completely frank: That sucked. It was terrible. It was awful. It was pretty much every bad word in the dictionary you can think of.

We've seen bad performances over the last couple of years. Heck, the entire two years of the pre-Antonio Conte era was pretty damn ugly. Lots of bad games, lots of headdesking and facepalming.

Sunday night's showing at the San Siro ranks right up there.

For as good as Juventus were against Chelsea on Tuesday, they were that bad against Milan five days later. Juventus had two shots on goal. TWO. Of 13 shots total, more than half were blocked. What the hell.

Noticed how I haven't even mentioned the non-existent handball that resulted in the game's only goal? Yeah, Juve's performance was that bad — especially when you consider what just happened earlier in the week.

The blown penalty call will dominate the discussion because that's what happens when a ref screws up. It's Italy — and there's nothing better for the journos or more popular than talking about how somebody screwed a call up. But I can't help sit here and think about how freaking awful Juve played against a Milan side that, while it has shown a few small signs of life lately, is nothing close to a title contender this year, let alone one that should be beating Juventus 1-0.

But, for the record: Not a handball. 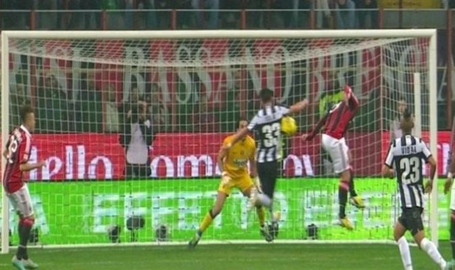 Buffon: 6 - Judging by his reaction, I'm pretty sure San Gigi will tell you he should have had the penalty kick from Robinho. Then again, most keepers will save if they get a hand on the ball, it should be saved. But other than his incredibly near-disaster of a pass in the second half, it was pretty much no problems for Buffon.

Barzagli: 7 - I was worried that El Shaarawy would give him some problems, but Barzagli did everything to make things be the complete opposite. Just when you think he might have a bad game, he proves you wrong. The consistency this man is unbelievable. What an absolute wall.

Bonucci: 7 - Just solid as heck all game long. It was fitting that in 100th career game at Juventus, he showed the vast improvement he has made over that time. His passing was very good — and was noticed that much more with all the complete miscues going on in front of him in the midfield.

Caceres: 6.5 - It's been quite a bit of time since we've Caceres play a more central role when it comes to defense, but he really didn't show much rustiness at all. A good sign without and doubt and should help him some much-needed playing time in the near future.

Isla: 4.5 - Seeing people write "Isla" and then "handball in the box" and make no mention that it actually wasn't in their game recaps makes me laugh hysterically. Aside from the complete sideshow that the handball will create is something much more important: There is bad crossing, and then there's the kind of impact Isla made in the first half. Every cross Isla attempted either was straight at Kevin Constant or wasn't a threat at all. He was rightfully replaced at halftime — although I don't know why Stephan Lichtsteiner wasn't the guy coming off the bench for Isla.

Vidal: 5 - I guess Sunday was the day for every Juventus player of Chilean decent to play like crap, because that's exactly what happened. The usual amount of tackles — nine — were there for Vidal, everything else wasn't. His passes were going to the wrong team, his attempted

Pirlo: 5 - Nothing. One of his worst games in a Juventus jersey. I've never seen so many misplaced passes from Pirlo. A basketball coach for a local I cover for my day job recently gave a quote that applies perfectly for Pirlo's performance: "We turned the ball over as much tonight than we want to all year." That's how I felt about Pirlo's game against his former team. It was lik Momo Sissoko grew his hair out, got a beard, and re-signed for Juventus. His passing was, regardless of what the stats say, not very good at all.

Marchisio: 5.5 - Il Principino never got into the game. Much like the rest of the team, just looked off from the opening kickoff. His usual runs through the midfield and into the final third never happened and any shot attempt he had went right at a Milan player, never testing Marco Amelia.

Asamoah: 5.5 - Credit Mattia De Sciglio for this one. The Milan youngster won the battle on the wing against Kojo. Asamoah's impact was nowhere near like it was against Chelsea, and it showed. But, unlike Isla, at least his crossing had some kind of success. So he had that going for him, which was nice.

Vucinic: 4.5 - If Tuesday night against Chelsea was 'Good Mirko,' then Sunday was 'Godawful Mirko.' Gave away possession far too often, which really hurt any kind of attack Juventus actually had. We knew he was a hot-and-cold kind of player, but this kind of performance just reaffirms it. He was arguably the worst player on the field.

Quagliarella: 5 - The lack of service from the wings really hurt Quags. Never got in a flow at all, which is probably due to a number of reasons. He wasn't a fan of coming off for Giovinco in the second. That's for damn certain.

Padoin: 5.5 - At least there was somebody from the right wing who did something other than cross it right into Constant's shinguards.

Pogba: 5.5 - Brought on to try and spark the struggling midfield with 20 minutes left, Pogba was an odd choice for the simple fact of where he did or didn't fit in formation-wise. I wasn't the only one struggling to figure out what Juve switched to once the young Frenchman was brought on. It didn't really matter, though.

Conte/Alessio: 5.5 - For as much as some players talked post-Chelsea about how crucial the Milan game was, they certainly didn't look like it. I posted on Twitter during the game that it took about 65 minutes for the players to show some kind of sense of urgency. They were as flat as I've ever seen since Conte became manager. And Alessio's subs? Don't get me started on those. If there's a reason why Lichtsteiner was chosen over Padoin that I don't know about, then it's understandable. But on the whole picture: I don't understand how a team can be that good on Tuesday and then that terrible on a Sunday.

THINGS I THINK I THINK

2. Why does this always happen when I have to write the recap? #BlameDanny

3. Let's talk refereeing! The picture above says it all. It wasn't a handball, yet it was called a handball. Pretty sure we've established that. What got me was how long it took to get the call officially. Right or wrong, that can't happen. Of course it's worst when it is the absolutely wrong call — like with Isla — but show moments of indecision makes it that much less tolerable.

And here's Ivo saying smart things about it:

Maybe I'm naive, or ignorant, but Muntari's goal & this penalty is not team favoritizing. Just terrible Serie A referring, as usual.

4. I just hope they've gotten the absolute stinker out before Shakhtar in a handfull of days. Get over it and move on. There's really nothing more than need to be said.