Share All sharing options for: Round 17: Caffe Con Lecce

It seems as if it's been forever, huh? Actually, I'm going to be honest, it doesn't. Not for me at least. The makeup against Udinese a mere four days before Christmas meant that we had Serie A action up until the dying days before the Holidays, and, of course, the Holidays are plenty of a distraction on their own. I thought I would be dying to get my fix by this point, but between Christmas, New Years, and the NFL keeping me preoccupied (oh, and a little something I call work), I haven't even looked at the ledge yet. Still, even though it didn't seem that long considering all the stuff going on, looking back it does seem like it's been months. It's nice to get back to things. 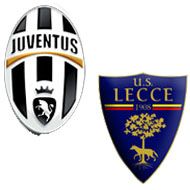 And now, off to the heel of the boot for a daytime fixture which means it's a 9:00 a.m. match for my timezone. Get your caffe ready.

Lecce is currently in dead last place, with nine (!) -- yes, *9* points from 16 games, and little light at the end of the tunnel.  One draw and two losses -- the last of which a very unfortunate 4-1 drubbing versus Sfinter -- were the best they could do in their last three games.

Meanwhile, I had almost forgotten that we finished up a fairly difficult two weeks, which saw us pick up two points while traveling to hot spots in Roma and Udine, with a relatively easy 2-0 win at home against Novara.

Le chiavi:  Mirko's back.  Lecce has the exact reverse goal differential as we do, so offensive potency should be at a premium.  A Matri without Vucinic next to him has made him look very ordinary; particularly in a 2 man front-line while next to Pepe.  So help me God, Conte, if you ever try and pull that shit again...

Elia scored a nice goal against Al Hilal, and according to his agent, Now we'll see what he's made of!  Meh, I give up, he won't start. I know that Mirko is back, but he was hurt, what's the rush?  He could be useful from the bench, as we try to press the shit out of the home side who is still winless at home.  But alas, it won't be meant to be.