Round 18: Bury My Heart at Cagliari

Share All sharing options for: Round 18: Bury My Heart at Cagliari

Last year, a match against Cagliari in Sardinia was largely considered to be pivotal...well, at the time, at least. In just his second match with the club, new boy Alessandro Matri had to face off against his old club, in what surely had to be an emotional, heart-wrenching matchup. And face tee off he did. 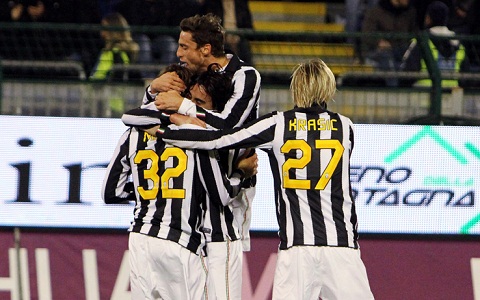 A hero for us and traitorous villain for the Sardinians, Matri would record a brace and provide a modicum of false hope that the season wasn't actually spiraling horribly out of control (it was).  And with that would go onto win their third consecutive Serie A matchup versus Cagliari, and Matri would go onto score six goals during the teams' last five meetings -- unfortunately three of them would be against us.

As far as the present is concerned, Juventus currently remain in joint 1st with Milan, 2nd on goal differential, with 37 points.  Cagliari, meanwhile are in a respectable 10th place, with 21 points and an almost even -2 goal differential.

While tifosi may be on edge following last week's squeaker, I'm neither particularly concerned nor disheartened by the performance and the carry over to this week.  First of all, after a long layoff which included an intense training trip to Dubai with a friendly mixed in there, coming home to play away at Lecce, in the middle of a torrential downpour on a saturated pitch, is certainly not the easiest of tasks. The fact of the matter is that this is precisely the type of game that we would not have won in the past two years -- at precisely the right time for things to begin to unravel.  Oh, and by the way, we won.  3 points, are 3 points, are 3 points.

The table, meanwhile shows that Cagliari should be a much tougher opponent than Lecce, but we're back at home with what should be ample time to recalibrate.

Le chiavi: Lots of buzz has been focused around our midfield.  Is Montolivo even a legitimate target as I had hoped he'd be?  Has Marotta moved onto Behrami as someone to challenge our M-V-P midfield for playing time, and both Marcos Motta and Borriello for most idiotic haircut?  Are we really going to splash over 10 m Euros for Fredy Guarin to be a reserve?

Oh, and there's the issue of Cagliari's midfield, of which two prominent members of it have substantial connections to Juventus in one way or another.  Radja Nainngolan is apparently both Belgian and sought after by the Juventus management as that elusive vice-Pirlo, while Albin Ekdal is still owned by us and arguably a cheaper, more reasonable, and still talented alternative.  Nevertheless, throw in Andrea Cossu as the third of four midfielders, and this part of the field is looking pretty solid, while being backed up by yet another allegedly-Juve-linked player in defender Davide Astori.  It's not that difficult to see why this team is firmly planted in the middle of the table.  All eyes will be on our center backs as they look to keep up with Cossu in the hole, as well as the two strikers Cagliari will deploy, while the rest of the midfielders will have to work hard to keep up with one another.

Bad news:  Chiellini is suspended due to yellow card accumulation, but he was playing at left back anyway, where I'm not afraid to say that his skills are practically being wasted.  Instead Paolo DeCeglie will should finally get another stab to show what he can do on the flank.  Maybe this isn't so bad, or would be worse if Giorgio had been playing at center back where he belongs, with nary a reputable backup.  Instead, Bonucci and Barzagli have become a pretty good tandem in their own right.

Good news:  Marco Borriello.  Just kidding.  About the part that he can/will be a gamechanger, not about the part where he is actually called up.  He has been.  Speaking of which...

Give Pepe a rest.  He's played well, damn-near has been overachieving thus far, but hasn't looked as sharp the past couple of matches.