Well there's a game we won't remember for long. A minimalistic victory over the last placed team and a performance that reminded more of the early 2011 Juve than the late-2011 one. 3 points are in the bag though, we're still top of the table along with AC Milan, and the most impressive and utterly astonishing statement in the world still holds true - we're still the only undefeated team in Europe, baby. Hellz yeah.

After much discussion about how this new Juventus will react in a traditionally shitty time of the year, our Bianconeri made sure no one got things right - we were neither utter shit nor a resemblence of Conte's mighty warriors from the beginning of the season. Instead, we were lazy, rusty, uncreative...and victorious. 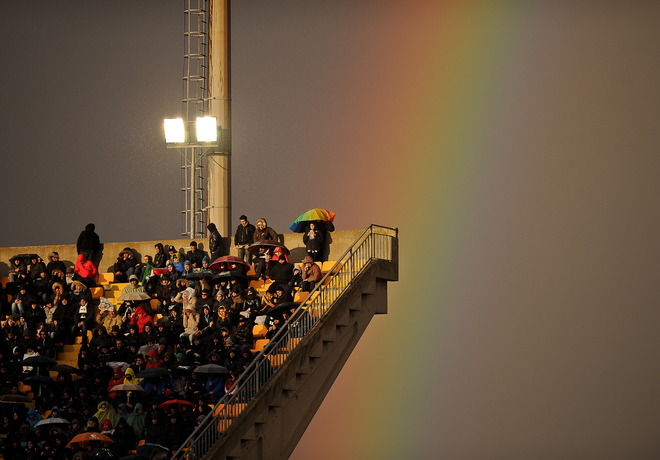 The game started off as a total deja vu. Anyone remember the first game after Christmas last season against Parma? A lethargic, uninspired Juve was thrashed by a sneaky Parma side while Quagliarella, our best forward at the time got badly injured. This time around, it was much the same for the first 20 minutes. Our Bianconeri played with no grinta, slacked off, and had a tough time creating chances. Then Quagliarella, who finally got a no-excuses starting spot up front, broke his cheekbone early on and had to be substituted. Things just weren't looking up.

But if there is one game where Vucinic would be able to make a difference, it would be against bottom-placed Lecce. In the 27 minute, Mirko took a solid shot at goal from outside the box, keeper Benassi blocked the shot and Matri smartly ran in and headed in the rebound. An all-important goal that would bring Juve 3 points in a match everyone will quickly forget. After all, we do have the thrilling Caglari coming to town next.

Buffon: 7 - Gigi had a decent amount of work to do against Lecce. He blocked a couple shots that were certain goals, and was a perfect complement to Lecce's inaccurate finishing. In many ways, he was one of the main reasons Juve held on to the lead. Btw, did you know he is now a PIMP in his off time?

Lichtsteiner: 6 - Steiner failed to get up front as often as we're used to him by now, and that kinda disappointed me. Not sure if it was a tactical move by Conte to make sure there's always someone fast to cover the South Americans in defense, since Bonucci and Chiellini were getting burned left and right for most of the game.

Barzagli: 7 - Can you name a more consistent defender in Italy right now? Heck, in Europe? I know we're not playing top notch competition this year since we're out of the CL, but Barzagli has found some fine form and been able to keep it. Before the season began I thought of him as a backup CB. Now I cannot imagine our defense without him.

Bonucci: 5 - If Barzagli had a quietly great game, Bonucci had a loudly crappy game. Not like against Napoli-bad, but he messed up pretty often. Late in tackles and just generally off. Shake it off Boner (John, was that your nickname for him? You silly goose.)

Chiellini: 6 - A decent defender makes mistakes. A good defender makes mistakes and adjusts to them. That's exactly what Kaiser did against Lecce. Early on, Cuadrado made him his bitch and Chiellini kept finding himself chasing after Cuadrado from the wrong side. But then Giorgio realized he was playing the South American too close and gave him more space to do his dribbling before taking off on a run. This made Cuadrado less effective. Vucinic then got back more and helped out and together they shut down Lecce's most creative player on the day. Shitty start for Chiellini, yes, but he got better throughout the game. For that I give him props. That said, there is still plenty of time to buy an actual left back, Conte. Just make sure his first name is Martin and his last name starts with Caceres!

Pirlo: 5 - Pretty horrid game from our main playmaker. What was up with all the high balls? It was like he had just learned the "Lob Through Ball" button on FIFA and just kept hoofing them over. Look for him to make the difference against Cagliari, a player like him will want some things from the Lecce game back.

Vidal: 7 - If Vucinic wasn't such a "creative spark" for us in a time of need, I would've selected Vidal as Man of Match. Seriously. The guy was everywhere. He intercepted numerous balls in defense, and was always up front attacking. If Matri and Vucinic weren't so selfish at times, he could've easily had 2 goals as he was in clear positions in the 16. Felt bad for him, really.

Marchisio: 5.5 - A shade of his normal self from the first half of the season, Claudio had a very forgetful performance. We may need his grinta and determination against the big teams, but it's all the more necessary against smaller teams when others tend to relax a bit. If he's gonna be the future captain, I'd expect that from him for sure.

Pepe: 6 - I have to admit, I kind of lost track of Pepe during the game. He started strong and was pretty dangerous towards Benassi's goal, but then he either disappeared off the radar or my eyes were focused on the performances of other players. He obviously didn't do anything memorable. So there.

Quagliarella: sv - I feel bad for Quags, but I'm happy it's nothing serious. He had surgery on Monday and will be out 2-3 weeks. He is probably bummed that as soon as he got the starting spot over Matri he got injured. Now that Borriello is there too, the competition is getting tougher. I'm sure Quags loves another good challenge though!

Vucinic: 7 - It wasn't hard to stand out from our Juve on Sunday, and Vucinic did it. He created the goal, had a couple good runs and opportunities, and was the most dangerous player on our team. Though if you dissect his performance, he really had an unremarkable game. But such was the competition.

Matri: 6 - Yes, he scored the winning goal, but ever since he came on and missed that sitter in the first minute, I kept thinking damn Matri has lost it (for now). Am I just eating up the negative hype everyone is creating around him? I hope so. With Quagliarella out for 2-3 weeks, he's sure to start the game against Cagliari. I hope he does. I am still vividly pissed at him for not completing that 1-2 with Vidal that would've given Vidal a 1-1 with the keeper after a beautiful move. Random, I know. But I'm pissed. Hope he gets a good goal against Cagliari to get his confidence back up.

Marrone: sv - I would love to see more of this kid. Apparently if Pizarro comes from Roma, Pazienza will be on his way out so that could leave a spot for Marrone to play more minutes as a defensive backup.

De Ceglie: sv - Came in to be the 5th man in the backline and help cover the left side. Not much to say here that hasn't been said before :) 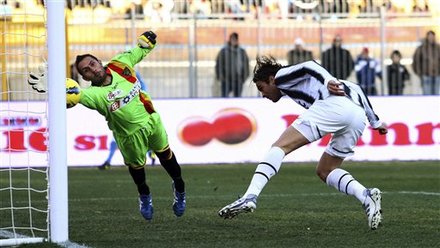 Conte: 6 - Thank God he didn't start January with a loss like most of his recent predecessors, but I'm sure we all expected more from Conte. Again, late to sub people off. Is that ever going to change or should we just add it under the "In Conte We Trust" clause and just roll with it?

#1: I'm excited about the start to the 2nd half of the season - Lecce away - done. Cagliari at home and then Atalanta away? Conte and his man should take care of that and bring in 6 points. Then we have Udinese at home which is a tricky game always, then Parma away. All in all, a pretty decent schedule for Juventus to start 2012 on the right foot. Right guyz? RIGHT?

#2: Have we taken a successful corner this season? - How frustrated do you get when you see Pirlo stand over the ball for a corner kick looking for a short pass or some sort of a unorthodox solution? Freakin take the corner! Cross the ball. No short balls or direct passes to someone outside the 16 have worked more than maybe once. None! Give Chiellini, Bonucci, Barzagli a chance to get a goal. Give Matri a chance to sneak one in! Anything, just stop passing it short and ruining the corner. Please!

#3: Rumors: Amauri to Genoa, Toni to Bologna - If only we can use an amnesty clause on Iaquinta too and we'll be all cleaned up from the Secco shit years. That will leave ADP, Quags, Matri, and Borriello fighting for that one spot up front. Have at it boys!

#4: More Rumors: Sorensen to Bologna on a co-ownership - if we get Caceres, there is no reason for Sorenses to rot on the bench. Hope he gets a good experience wherever he goes for the rest of the season.

#5: I leave you off with Borriello's press conference after signing the deal. Gotta love the first question :)