Share All sharing options for: Amauri's Still Here, Rejecting Every Move In Sight 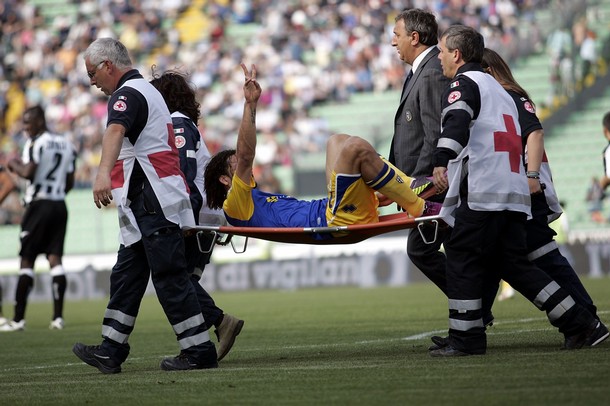 Carrying Amauri out on a stretcher might be one of the few options we have left...

There are things in life that just make you want to throw stuff at the wall. Heck, even throw yourself at the wall. You name it and it probably involves a wall and some kind of destruction.

Amauri turning down every single possible move away from Juventus is what puts one of those things to happen in motion — quickly.

We thought he was gone for good when Big Daddy Beppe was able to ship him off to Parma — salary included! — during the winter transfer window. He proved what we all knew about him — he's the big fish in a small pond, nothing more than that — and did enough of it to basically say "Hey, mid-table teams in Italy. I'm not washed up like you all thought I was!"

However, once Juve's preseason training opened, there was Amauri. Such a happy fellow.

The rumors flew of where he'd be off to. Back to Parma? Back to Palermo? Maybe one of the 10,000 Serie A players Leonardo was bringing with him to PSG? Maybe to help Cannavaro tutor the kids in Dubai? What about carrying Grosso's bag of goodies whenever he went to the tanning booth? It seems like they were all thrown out there at some point.

But nothing happened. The transfer deadline came and went and Amauri is still under Juve's control, set to steal paycheck after paycheck because he has nothing better to do. He's thrown away the chance to return to Palermo. He's turned down a chance to go play for Trabzonspor (say that name three times fast) in Turkey. He isn't going France. Thanks for trying your best, Didier, but this is a creature of its own free will.

It's hard to say what the hell is going through his head these days and why exactly he has declined all of these moves because, well, we have no idea. He's clearly not wanted at Juventus anymore yet, according to his agent, he wants to stay and prove his worth with the team. (brb, slapping my knee because that's hilarious.) If that means disgracing our beloved Pavel's No. 11 shirt by bitching at refs and being completely worthless on the field, then he's already done more than enough of that. No need for another display.

So here we are, with a new stadium about to open up its lovely doors to the public within a matter of days and one of the worst buys in the club's history (yo, thanks again for that, Alessio) is still haunting us. I don't care if he's not training with the team right now, he's still here, still getting his checks signed by Juventus. We're still talking about him in the present tense. I want to talk about him like he's a thing of the past and in the past tense, dammit.

One good thing in all of this: He won't be scoring the game-winner for Parma on Sunday at the new stadio.

Meh, whatever. I've put off bashing my head against the wall to write this post. Let me get back to that...

And yes, I will blame Amauri for of all this. It's only natural to do such a thing.